Why Didn't Lehigh Host? And Other FCS Playoff Thoughts

By now you probably know that Lehigh is headed to New Hampshire on Saturday to face off against the Wildcats in the first round of the FCS Playoffs.

The answer resides in the bidding process and some NCAA rules, both of which explain why it happened.

I'll talk about this, and my other thoughts on the bracket, below.


Let's start with the structure of the FCS playoffs.

The field is constructed in several stages.

First, the autobids are determined.  Ten conferences have their champions (or co-champions) qualify automatically for the FCS playoffs.  The Patriot League is one, and their autobid went to Lehigh.

Next, fourteen at-large teams are picked from the remaining teams that aren't autobids.  One of these teams, interestingly, was North Dakota State, who were co-champions of the Missouri Valley but didn't get the autobid thanks to their head-to-head loss to South Dakota State.

Only after the entire field is selected are the seeds, 1-8, determined from the entire pool of teams.

The fact that things are done in exact order explains some things that, taken alone, do not make sense.  10-1 North Dakota State technically did not win the autobid from the Missouri Valley, however, when they line up all the teams in a row, they could still determine that North Dakota State should be the No. 1 overall seed (which is what happened in this field).

I think the biggest misconception in the FCS playoff field is that the results of one step inform the other.  They don't necessarily, and as you will see, this is why Lehigh is on the road in their first round game.

So once the seeds 1 through 8 have been determined, the remaining teams are grouped together regionally wherever appropriate.  Of note: the remaining seeds are not seeded from 9 to 24, and matched to play one another.

The reason for this is to keep the costs down for staging the championship, something that the NCAA reimburses.

To understand why, let's hypothetically say, if you seeded the entire field, Lehigh happened to be slated to play at Weber State.  Lehigh would be required to fly out to Utah to play their game.  Let's also say Villanova was slated to play San Diego, based on the full seeding, and the Toreros would need to fly to Philadelphia for their game.

Does that make sense when you could schedule Lehigh at Villanova, and San Diego at Weber State instead?  Few Lehigh alums are going to be able to schedule a flight to Utah during Thanksgiving weekend, but many would be able to set aside an afternoon on a Saturday holiday weekend that's a quick drive from Bethlehem.

Furthermore, for the athletes themselves, it's a major win.  They can practice at home, and can take a bus to the game rather than flying across country, across time zones, at an unfamiliar location on a week's notice.  In basketball, it's not a big deal to practice in a high school gym, but for football, it's an entirely different proposition.

So now you know the process: 1) Lehigh made the field; 2) the rest of the at-large teams were chosen; 3) the seeds were chosen, and 4) the first-round matchups were determined with some regionality in mind.  Now, we enter stage 5) who hosts.

Host team in a playoff game is commonly assumed to be completely financial.  However... there is much more to the criteria than simple dollars.

(You'll note "loudest Twitter followers", sadly, are not listed among the criteria, much to my disappointment.)

In Lehigh's case, there is indeed a blind bid that Lehigh submitted several weeks ago that showed Lehigh's "seriousness" to host a game.  However, as you can see from the official handbook, concepts like "quality of facility", "revenue potential" and "attendance history" are big factors - not size of guarantee.

As Spike over at The Sports Arsenal shows, New Hampshire's average attendance for games this season was 11,108 vs. Lehigh's 6,527.  If the committee simply decided on "revenue potential/net receipts" or "attendance history" for hosting in this particular case, New Hampshire wins that argument fairly convincingly.

There's also the matter of "quality of facility".  A "quality" facility is certainly subjective (certainly I think Murray Goodman is second to none in terms of beauty and a great place to watch a game), but in the specific case of a college football game in late November, "quality" might mean the ability to host a game that could be a night game.  UNH's Dungeon has the ability to host a game starting at 2PM, simply because they have lights.  Lehigh does not have anything permanent in place to allow them to do so.

I think when you show this evidence, it shows that the way the rules are set up, Lehigh will always lose a bidding war in a 1st round game vs. a school like UNH.  Lehigh wouldn't necessary lose to every team they could theoretically be bidding against, but they'd lose to a lot of them, based on those cold, hard numbers.

And it also shows that there are only three ways to bridge that gap for the future:


It's easy to complain about the process.  It's harder to do the little things required - and that means fans as much as administrators - in order to play the game in the way that the NCAA wants.  Lehigh can do things, I think, on all three fronts to make it more likely in the future to see home games at Murray Goodman.  It's up to all of us to make it happen.

I have some other thoughts about the bracket too.  I'll just list these as bullet points. 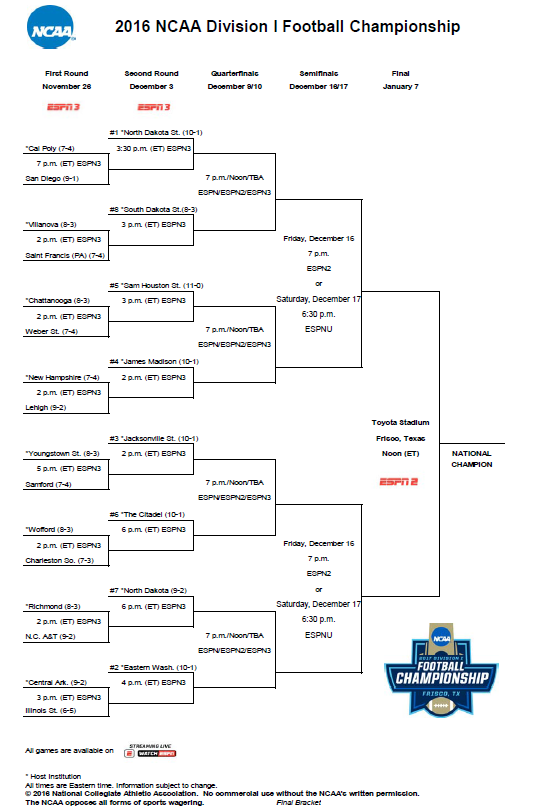