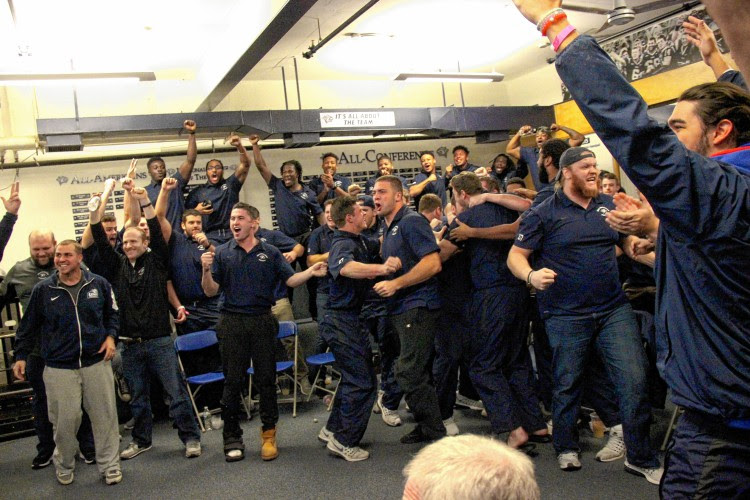 In order to understand how UNH will be looking at this weekend's game against Lehigh, you need to go back to the narrative of last week.

And then, you need to go back to the narrative from last year.

But first, let's start with last week, where the Wildcats were not only battling their Rival Maine in the "Battle for the Brice/Cowell Musket", they were battling to keep their playoff dreams alive.

The Wildcats, who had qualified for the FCS playoffs for twelve consecutive years, had fallen behind their bitter Rivals Maine, 14-7 at halftime.

And the starter, sophomore QB Trevor Knight, was out of the game with a foot injury.  The backup, senior QB Adam Riese, would have to be the trigger guy to rally the Wildcats to the win.


Riese wouldn't have to do it alone, of course, but "the offensive line that had been pushed around began pushing back,"  The Concord Monitor reported, "and senior RB Dalton Crossan ran wild. The senior broke tackles and ankles on a stunning 35-yard touchdown run to make it 14-14 with 5:31 left in the third."

The game would see-saw back and forth, knotted at 21 with 5 minutes to play, but under the steady hands of Riese and Crossan, the Wildcats were able to grind the ball to inside the Maine 10, run the clock all the way down, and allow sophomore PK Morgan Ellman to kick the game-winning FG.

Though it wasn't a great night's sleep for the Wildcats, by 11AM on Sunday, they realized they weren't only going to make it into the playoffs, they're also going to get a home game.

“The biggest thing is the kids and to see their reaction. You could feel it in that room when it hit, when that name went up on the board,” UNH Coach Sean McDonnell said. “Believe me, I feel the same way. You look around you see senior OL Curtis Nealer, you see senior OL Andrew Lauderdale, you see senior DB Casey DeAndrade, you see  freshman S Pop Lacey. You see these guys just jumping right out of their chairs. They get to practice for another week. Get to play for another week and, more importantly, we get to play in the Dungeon one more time. It’s all good.”

For the fourth consecutive year, they'd be getting a Patriot League school at their place.

Last year, though, it was different.  Lightly-regarded Colgate invaded The Dungeon and came away with a 27-20 win.

Behind an unbelievable 4 touchdown performance by Raider RB James Holland, the Raiders jumped out to a 27-6 lead before Wildcat QB Sean Goldrich mounted a furious comeback that fell just short - two shots to tie the game thwarted in the last four and a half minutes.

"I was saying to the guys, you know what, last year we had the same situation, a Patriot League team coming to Durham," Crossan said on Selection Sunday. "I think personally that we kind of wrote them off, not like really we thought we were going to win 100 percent, but we were kind of looking towards JMU, thinking about going to JMU. We had already beaten (Colgate) earlier in the year. . . . Us seniors are going to make sure that is not the mindset going into this week."

On the Lehigh side, of course, there are a lot of other thrilled players that are happy to get into the FCS playoffs for the first time in their careers.  For one player, though, it's also a homecoming.

Junior WR Troy Pelletier, who lives in nearby Deerfield, New Hampshire, will be coming near home to try to bring Lehigh their latest first-round FCS playoff pelt.

“A bunch of my friends go to UNH, and I know a few guys on the team,” he told The New Hampshire Union-Leader. “Trevor Knight [the QB that got hurt vs. Maine] and I have been talking all season. We texted each other as soon as we found out about the matchup. I know junior OL Jake Kennedy, and of course [Andrew] Lauderdale.  Being from Deerfield, I’ll have a lot of friends and family at the game Saturday.”

Few New Hampshire-based football players slip under the radar of head coach Sean McDonnell, but as Pelletier's high school coach tells us, apparently Lehigh's Walter Payton Award nominee was one of them.

Pelletier played both basketball and football at Central, but chose to play only football during his post-graduate year at Bridgton (Maine) Academy. He said UNH was high on the list on schools he wanted to attend, but the Wildcats didn’t make a scholarship offer.

“He was big, strong, physical (in high school),” Central coach Ryan Ray said. “Ran good routes. Hard-worker. If there was anything keeping him from getting offers coming out of Central maybe it was his speed.

“After a year at Bridgton Academy he took his game to another level. I was surprised Coach Mac (UNH coach Sean McDonnell) didn’t offer him something at UNH, but there are a lot of good players out there who can play at the FCS level. This year has shown how good of a player he can be.”

As much as Lehigh has struggled up at The Dungeon, Pelletier wasn't one who struggled - last time he was up there, during the 45-27 loss in 2013, Troy was a freshman in his second game as a Mountain Hawk but caught 3 catches for 30 yards and 2 TDs.

The Morning Call did a piece on senior ROV Laquan Lambert:


"We didn't come out there ready to play," Lambert recalled. "We were complacent. We didn't have a great week of practice and didn't prepare to the best of our abilities. Honestly, we weren't out there trusting in our coaches."

"I'm very happy to be here," Lambert said. "I'm surrounded by a great group of teammates, a great group of coaches, and the Lehigh community is outstanding. senior WR Derek Knott and me have battled back from injuries and we came back for this. We came for a championship season and now we're going to the playoffs and we're ready to take the country by storm."

Head coach Andy Coen is pleased that Knott's and Lambert's patience has been rewarded with a season they'll always treasure.

"The contributions of Derek and LaQuan have been big for our team, and I'm really happy for those two guys," Coen said. "I hope they can be a big part in helping us win this game."

And Lehigh Valley Live did a piece on sophomore PK Ed Mish:


"I like the pressure, that's what kicking's all about," he said. "It's that chance that it might come down to the last second. New Hampshire just won a game with seven seconds left on a field goal, so I know this could be a very tough game and it might come down to me. I'm excited about that."