Where Will Lehigh Play in the Playoffs?

Let's just put it this way: After looking at the mock brackets from around FCS Nation, mocking it out myself, trying to go over as many possible scenarios that I possibly can - I still have no idea.

That doesn't mean, dear Reader, that I won't try, and I won't try to explain to you what I think could happen.  But it's not easy, and you'll see why.

Put simply, I feel like this is the most wide-open playoff field ever, for two reasons.


The first consideration is seeding.  I feel like the No. 8 seed is a wide-open spot.

I think the top six seeds are set in stone in some indeterminate order (North Dakota State, Sam Houston State, The Citadel, James Madison, Jacksonville State, Eastern Washington), and the seventh seed (South Dakota State) was won on Saturday by them by beating Northern Iowa.

Whomever gets in the 8 seed, however, changes the entire travel structure of the playoff bracket.  Some have North Dakota of the Big Sky in there, but I don't think they're as strong a seed as Villanova for that final spot.

Getting a seed is a great competitive advantage for a team.  It gives the team a bye week before their playoff game, and essentially guarantees a home game.  It also changes the entire bracket.  If the 8th seed is, say, North Dakota, that changes possible bus trips into flights in the following rounds.

Q: Does Lehigh have a chance at a seed?

Arbitrarily, I put the chances of Lehigh being selected as a seed at about 10%, and that's based on the fact that (in my opionon) they would be in competition with North Dakota (co-champion of the Big Sky) and Villanova (8-3 and beat Lehigh head-to-head).

The second consideration is filling out the field.   I think that there are almost a dozen teams fighting for the last six at-large spots.

Depending on the slender criteria that separate the teams, the entire bracket could be shifted.  If they pick Fordham and New Hampshire, that affects the bracket.  If they instead pick Southeastern Louisiana and Samford?  A completely different bracket emerges.

The reason is that whenever possible, the FCS committee tries (within reason) to keep brackets somewhat regionally, especially in the opening rounds.  The committee will try to avoid rematches, and will try to avoid sending (for example) Lehigh across the country on a week's notice to play at Cal Poly.

Q: Does Fordham have a chance to make it?

Arbitrarily, I put the chances of Fordham in the bracket at 50%.  This is based on the mock brackets I've seen and the two I've mocked out myself, one with Fordham in, and one without.  What Fordham has going for it is a couple of good wins and a good track record for making the playoffs, and some offensive superstars.  What works against them is a bad loss to Monmouth (though it was in overtime) and no wins over playoff-bound teams.

Q: If Lehigh is playing the weekend after Thanksgiving instead of being seeded, do they get a home game?

Getting a home game for the FCS playoffs is a complicated process.  All schools have to put in a blind bid for the home game, intended to be used by the NCAA to cover the costs of the game.  The higher the bid, the higher the chance, but it all depends on your opponent.

Suppose Lehigh were hypothetically trying to bid against Delaware.  The Hens, who routinely average more than 16,000 fans in attendance, would almost certainly bid more for a home game than Lehigh, who would be likely to attract somewhere in the 8,000-9,000 range for a home game.  However there are other schools where Lehigh would win that blind bid, for example, Sacred Heart.  So the answer is, it depends.

Q: Who are Lehigh's possible opponents, and what is the chance they host them?

Finally, here's how I think the bracket might shake out.  Home team in Caps. 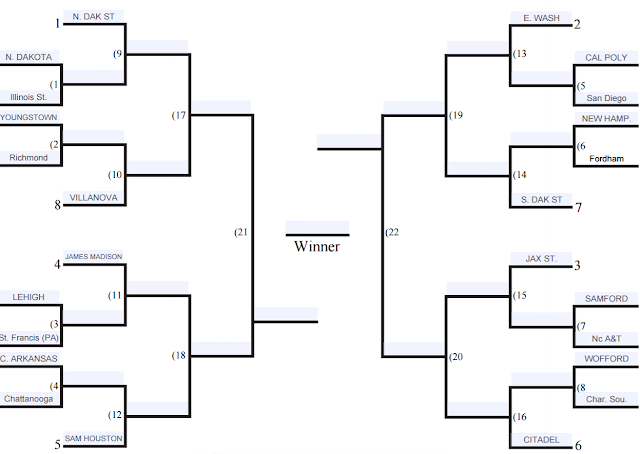