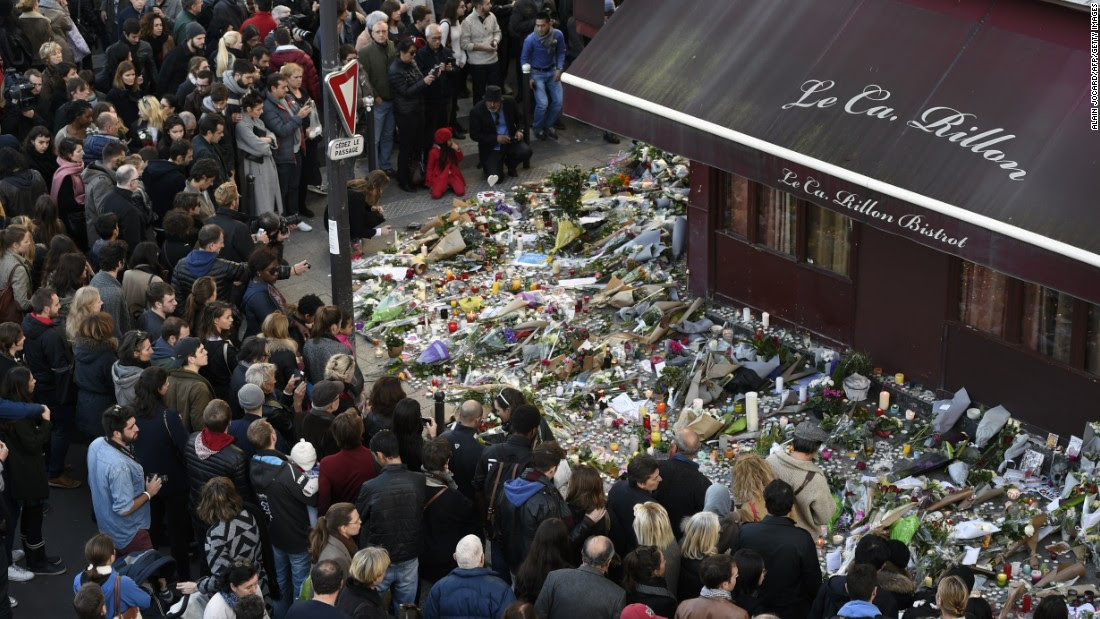 The morning of Friday the 13th, I was thinking about Lehigh going up to Hamilton and playing Colgate.  I was working on my game breakdown, trying to figure out if junior QB Nick Shafnisky would be able to be effective against the Raiders' run defense.

By the evening, I was tearfully trying to call my parents, with a profound sick feeling in my stomach, wondering if any of the many friends they have over in Paris were OK and out of harms way.

I don't know if these thoughts about Paris, this Saturday's game and The Rivalry will make much sense together.  But I will try.

I grew up in Paris, France.  When I was there, I played sports, enjoyed sports, ate at restaurants, and went to concerts there.

I went out on the town at a tender young age in Paris, France, way too young.  Perhaps I thought I was a grown-up, like every single teenager on the planet, but the reality was I wasn't.  I went out and experienced the night first-hand in a way that not everyone is able.

Music was important to me, as it is to most teenagers, so I went to a variety of different concerts.  I've always felt that Paris is a sort-of concert capital of the world, a place where there are dozens of venues, all different sizes.  Arena metal, acoustic, punk, high-end jazz, progressive - it's all there, somewhere, you just need to go out and find it, and I found it a lot.

Going out to eat in Paris, even as a teenager, was a lot more than going to McDonalds, though we did that too.  One of the favorite places we used to go was a place called the Chicago Pizza Pie Factory, the only place in Paris where you could get buttery, greasy, Chicago deep-dish pizza.  Friends and I often wondered if it could be a target of terrorism.  But that wasn't the only place we went as kids.  On dates, we'd go to bistros, and even for fine restaurants in the same arrondissement that some terrorists shot with the only apparent purpose of killing people that were having fun.

I never saw a sporting event in the Stade de France, which was built for the 1998 World Cup, which, thanks to incredibly heroic personnel at that venue, took actions that might have saved hundreds, or perhaps a thousand, lives.  But I saw plenty of soccer in my time in Paris, from the amateur high school-aged kids playing for a local, suburban club to the bigger games.  Of course I also was an avid American football fan, too, and had an NFL team or college football team played in Paris, France during that time, I have little doubt that I would have gone.

This is why the actions of ISIS terrorists affected me so immensely this weekend.

Walking the streets of Paris, sitting in a bistro, going to a concert, and going to a sporting event are not abstract concepts to me.  They were me.  They were me, with friends, without parents, going into Paris to try to connect with whatever Paris really is.  How many times did I tell my parents that I was meeting up with friends and heading to a concert at some venue, and we'd be back by midnight?  How many kids the same age as me did the exact same thing that night - and died?

Early reports say that the terrorists were "young".  There is some indication some, at least, could have been the same age as me, back then, thinking like idiots that they are really adults, that this horrifying, awful thing that will mean the beginning of the end of ISIS is the right thing to do.

I want to be able to hop in a time machine, to go to these kids and tell them to not make that choice.  Don't make that choice that will change your life, change everyone's life.  I want to feel like there was something I could have done or said to convince them that there's some other way in life.  Maybe I could have, because I was that kid, at some level.  Perhaps it is naive or egotistical, and maybe even a bit stupid, but that's how I feel.

But my level of distress was enough that I wasn't sure I could go through with my regular Twitter commentary during the Lehigh/Colgate game, a game which I was anticipating all week and couldn't wait to watch on Saturday.

I didn't know if I could bring my same level of emotion that I always bring to these games.  Would it be appropriate?  Would I know the right balance to strike?

Ultimately, it would.  After a slow start - and, frankly, a classic of a game that will be talked about for a long time in Patriot League circles - I was able to shunt aside the rawness of my emotions to experience the rollercoaster of emotions.

As Lehigh ended up five yards short, I was struck by one emotion I didn't have towards the football team - anger.

I wanted this team to be able to share in a Patriot League championship.  They came close.  Very close.

But this team never gave up for a second.  They gave everything to try to get this win.

I didn't get the impression of a team that was ever mentally checked out of the game.  I saw a team of fighters, fighting for every yard, facing off against a Colgate team of fighters, too.  Nobody gave up out there.  Despite the outcome, it was inspiring to see.

I was sad, and a bit frustrated, but I wasn't angry.  I really wanted to see this team get a Patriot League championship, and for that I was sad.  I may have wanted to hop in the time machine and whisper in a player's year, "Watch out for that zone-read option." But not angry.

I see this football team as one which little was expected to start the season.  They had some early setbacks, and after the loss to Fordham, could have simply packed it in for the season.  But they didn't.  They fought.  They made themselves a name and got back into the Patriot League title race.  They fought, and fought, and got within five yards of the championship.

That says a ton about this team.  Those that went to Colgate and fought will get over the hurt and sadness and, over time, will look back on this time as a lost battle, but without regrets.  They did everything they could.

That's where Lafayette comes in.

For these seniors, they have one more chance to give everything for a Lehigh win, and without question a Lehigh win over Lafayette, to break a two game losing streak to the Leopards and to end their careers on a turnaround win, is the only sendoff anyone should want to give them.

That is what I want for these seniors, who have given so much to get to where Lehigh is now - to go out with a win, to leave the Lehigh football team in a better place than when they reported back in August.

A win means a lot to alumni, former players, and even the casual fans, but it's most important to all the people suiting up and playing in the game this Saturday for the final time.  That day will be their day, their stage, their time to finish their playing careers on the right note.

I think the seniors, and the rest of the members of the team, can do this.