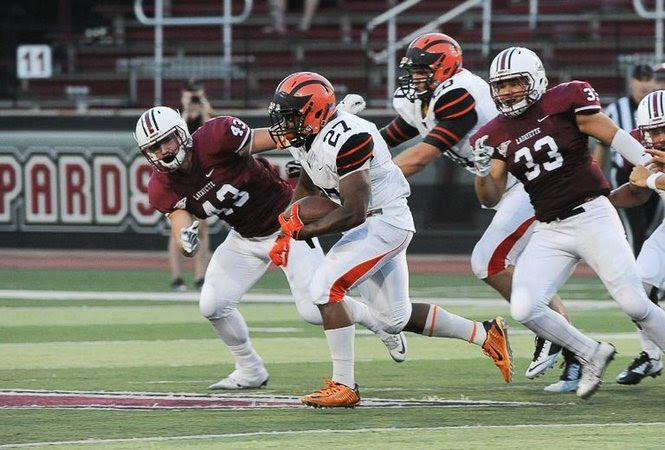 We break down the #Rivalry151 - and we give our fearless prediction below the flip.

One of the things that makes Lafayette such a dangerous and frightening team is the fact that they're 1-9, oddly enough.

As a Lehigh fan, despite the Xs and Os, you have to wonder if Lehigh will come out flat tomorrow, after a heartwrenching loss last week to Colgate, 49-42.

Sometimes, even in a huge Rivalry game, with a Patriot League championship on the line last week, you wonder if the Mountain Hawks can bring it as intensely as they brought it to Colgate.

Despite the breakdown, despite the football side, the question is - can they?

You have to go all the way back to the 1960s to find a time when Lafayette entered a Rivalry game with less than two wins on their resume.

It didn't end great either time for the Leopards, but both games saw a lot of fight from the Lafayette side.  In the 99th meeting of The Rivalry, delayed a week by the shocking assassination of President John F. Kennedy, the Leopards jumped out to a 8-0 lead before two-way player QB/S Ed Kish would rally the Engineers to a 15-8 win.

And in the 100th meeting of the Rivalry, which featured exactly two touchdowns and two missed extra points, the game ended in a 6-6 tie that more showed how un-elite both teams were in the bigger picture of Eastern college football.

The 1949 game was the only time that the Leopards came into Bethlehem with two wins or less and came out with the victory.  Bill Leckonby, the legendary Lehigh football coach, was the victim that day, when his 6-2 Engineers fell to a determined Leopard team.

There's no real way to sugar-coat it: Lafayette's offense has struggled mightily this season.

Whether it was the loss of WR Matt Mrazek, the loss of many offensive linemen over the course of the season, or the benching of the starting QB for the first two games, the simple fact is the Leopards rank 108th in FCS in total offensive yardage, 86th in time of possession, and 123rd - dead last - in rushing offense.

What makes that pretty remarkable is that head coach Frank Tavani, year in, and year out, is a proponent of a strong rushing attack to make Lafayette's offense go.  As the rushing game has struggled, so has the offense.  The Leopards only have 3 rushing touchdowns on the year, with one coming from the quarterback.

Junior QB Drew Reed, who, as freshman that guided Lafayette to a surprise Patriot League championship and FCS playoff appearance, had some good moments this year, and is still a talented, mobile quarterback that is still fairly accurate, completing more than 65% of his passes.  But he's struggled with interceptions, though part of that has come from constant pressure from opposing pass rushes.

Sophomore RB DeSean Brown, freshman RB C.J. Amil and junior RB Kyle Mayfield are curently sharing backfield duties, and all three bring something different to the table.  All three can catch passes out of the backfield, but Amil is the speedster, Brown is the workhorse, and Mayfield is the bruiser.

With Mrazek out - the Leopards' leading receiver - the player with the most receptions on the season is freshman WR Joey Chenoweth (43 catches, 326 yards, 2 TDs).  Along with junior WR Tim Vangelas (17 catches, 184 yards, 1 TD), they form a solid pass-catching combo that are finally healthy at the same time.  Senior WR Dan Dellovade is listed as a wide receiver, but he's really a tight end/H-back that is a bruising blocker.  You can bet Tavani will want to honor his senior in the gameplan, so it would be unwise to sleep on him.

The genesis of much of Lafayette's trouble has been a patchwork offensive line that hasn't excelled at either run blocking (2.15 yards per rush) or pass blocking (3.8 sacks allowed per game).  Lafayette's offensive line actually is quite massive - all five are listed at 300 lbs, including senior OL David Miller - but simply outweighing opposing defensive lines has not helped.

One can only wonder how far Lafayette could have gone this year had their offensive line been better, because on paper, the Leopard defense, running as ever the same base 4-3, is pretty good.

6'5 sophomore DE Beau Bosch (37 tackles, 5 1/2 tackles for loss) has done a good job for the Leopards this year, and has led a defensive line that has actually stopped the line fairly well, notably holding Colgate to 219 yards on the ground two weeks ago.  Junior DT Matt Rothrock, junior DT Robin Cepeda, and junior DE Colin Albershardt round out this unit.

Also finally healthy all at the same time is Lafayette's secondary, which has much of the same talent it did from last year in senior CB Matt Smalley, sophomore CB Phillip Parnham, and senior SS Jared Roberts, which talented freshman FS Jerry Powe as well.

Lafayette hasn't gotten a lot of rush to the quarterback this season, with only 8 sacks on the year.  They also only have eight takeaways, four fumbles, and four interceptions.

One of Lafayette's biggest bright spots is the emergence of freshman PK Jacob Bissell as a kicker.  Two weeks ago he converted four field goals and will be every bit the match of Lehigh freshman PK Ed Mish.

Junior P Ryan Forrester has done a good job in the punt game, averaging just under 40 yards per boot, while freshman RB C.J. Amil has done a decent job returning kicks.  Junior WR Tim Vangelas recently started to return kicks.  Returns were deemed a problem area for the Leopards earlier in the season, and they didn't get any returns for touchdowns.


1. Do Not Let Up Early.  The worst thing a favored team can do in an intense Rivalry game like this is let the underdog hang around.  If Lehigh can jump out to a two score lead in the first half, it could make it very hard for the Leopards to have a chance in this game.

2. North B, South B.  I really like the idea of pounding Lafayette's defensive front with freshman RB Dominick Bragalone, freshman RB Micco Brisker and sophomore RB Nana Amankwah-Ayeh repeatedly.  That potent Lehigh trio could really open up the passing game for some big plays.

3. Pressure on Reed.  A big pass rush will be critical to disrupt the timing of Reed, both running and passing the ball, which means junior LB Colton Caslow and senior LB Matt Laub will need to bring the heat to the quarterback.  If I see Lafayette give up their average number of sacks - 4 - I love Lehigh's chances.

It's The Rivalry.  There's revenge.  There's emotion.  There's payback.  And there's the fact that Lehigh has gotten better week to week.  Even in last week's loss to Colgate, the offense has come off of back-to-back weeks where it has been stellar.

On paper, it's a nightmare matchup for the Leopards, but then again, Lehigh's defense has struggled to contain the opposition most of the season.

All of this still spells a Lehigh victory to make the pain go away.  Good luck, seniors.