"Lehigh has impressed me very much," Dunlap was quoted as saying in The Brown and White.  "They're very warm people with a very healthy attitude in that they think very positively in competing with schools and teams in our league."

"Here you can easily get the team up for a big game, while at Cornell where you're dealing with bigger numbers and play the big school, the team is hurt by playing week after week of big games."

Nowhere, I think, was Mr. Dunlap's ability to grab the positive from a negative situation more on display than with the 1965 team.

Three times, against Cornell, Delaware and Bucknell, Lehigh would give up more than 40 points a game.  Loss after loss mounted, going into the final weekend of the season and the game against their hated Rival to go.

But Mr. Dunlap always had a way of being positive in the middle of a gloomy 0-8 season.  And on the final game of the season, it paid off with his first head coaching victory and being carried off on the shoulders of his players.


"We're looking ahead, not behind," Dunlap said to start the season.  "The boys have shown tremendous spirit, they're very enthisiastic, all indications point to an all-out effort.  I think we can have a creditable season.  We're striving to win our first ball game with midseason form."

After a tough 20-14 loss to Penn to start the season, though, Dunlap begrudgingly admitted that keeping morale up for the first three games would be a challenge as they "played the underdog role".

After a rough 42-21 loss to Delaware, at their weekly press luncheon, Dunlap refused to sound down and out.

"I'm pleased with the improvement of the passing game," he said before an 0-5 Lehigh team would host Furman.  "We hope we'll win this game; the team's attitude is good and we'll be in there fighting the whole way."

As Lehigh went to 0-6, 0-7 and laid a serious egg against Bucknell 41-0, to fall to 0-8.  The Engineers ' multiple-T offense were held to -6 yards by the Bison, and The Brown and White student writers struggled to say anything positive about the game.

Morale had to be at an all-time low for everyone, especially when fans considered that the hated Rival Leopards had beaten the Bison a few weeks earlier 14-13.  Lafayette, coached by Kenneth Bunn, had to think their chances of ending a five game winless streak against the Engineers, including a 100th meeting that both sides would have rather forgot, a 6-6 tie.

Yet Dunlap couldn't help but lay things out in a positive way the week leading up to the 101st meeting of The Rivalry.

"Our record is zero," he said.  "It couldn't be any worse.  But despite this, I think there we played some real good football.  It just wasn't enough good football to win."

"Saturday we can salvage one thing - pride," Dunlap continued.  "A victory against Lafayette will give us that.  And you can bet between now and the final whistle everyone on our team will be trying his best to salvage that pride."

In Easton, Lafayette's student newspaper had a different view of how the game would go.  Despite the Leopards' own modest 3-6 record, the student editors of The Lafayette, fresh off of a successful prank of distributing a phony copy of The Brown and White on campus, titled their game preview "Leopards To Slaughter Lehigh Tomorrow". 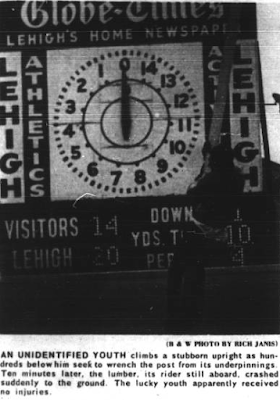 "Tomorrow will mark a bleak day in Lehigh history as they will end the season with their worst record m history, an 0-9 mark," they wrote.  "Tomorrow's 101st game will also mark the end of another streak in the history of the series. It will end a five year drought of victories for the Leopards in this traditional rivalry."

"The reason for this," they continued, "is that the Leopards top Lehigh man for man, position for position, game for game this season and it is hard to top that. If this were not the final game with all its emotional connotations, the con-est could be forgotten about before it was even played because there is no comparison between the two teams. Getting down to specifics, taking the probable starting lineups for the game, the Leopard offensive line for the first time this year will outweigh its opponents by eight pounds a man."

Dunlap's comments later in the week couldn't be a more humble contrast to those of Lafayette's student writers.

"This game means more to us than just the traditional game with Lafayette," he said, his first-ever as head coach in the historic Rivalry.  "It is the last chance that we have to prove what kind of a football team we are.  Our record is the only thing that this team will leave behind.  The coaching staff and the team know what kind of team we have, and no one is hanging their head in shame, but the rest of the world can only go on our record.  I feel that the team is no worse because it missed a touchdown on a fourth and goal to go situation against Rutgers, nor is it any worse because we went for the win and didn't run out the clock against them.  The team is no worse, but their record suffered."

The day of the game, the offices of Behtlehem Steel closed the shades in their windows to form a giant "L".

On Saturday, November 20th, 1965, Lehigh, for the first time all season, would win the coin toss.  They then proceeded to win the game. 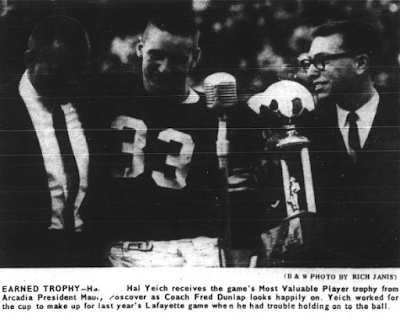 The same team that was held to -6 yard rushing the week before erupted, led by FB Hal Yeich's 174 yards rushing on 12 attempts.  He was easily the MVP as the Engineers coasted to a 20-0 lead, and QB Bob Draucker, finally healthy after a season full of injury, with 7 for 10 passing and ran for 54 yards.

During the game could be heard the chants "L-C-B!" from the Lehigh students.  That's because The Lafayette's student paper prank referred to fictional outrage over the fact that the Liquor Control Board was allegedly going to be required to have agents present at all Lehigh parties, according to the phony issue.

Popular this year were people renting planes with banners flying overhead.  "69 says Roll Over Lehigh," said one, while "Rich I Says Lick the Leopards" was another.

"Lehigh students gave their stamp of approval by ripping down the goal posts with seven seconds to go in the game," The Brown and White added for good measure.  "There were many happy faces Saturday night, proving that a win over Lafayette helps tremendously to ease the pain of a poor season."

Coach Dunlap, after receiving a bottle of champagne from trainer Ken Mettler, said "The team really proved itself today.  It was a great team effort and they showed that they were a better team than their winless record showed."

It's not hard to see how Fred Dunlap was such a great coach - and how he got his first, and perhaps toughest, win in The Rivalry.