Chuck laid down on the couch, his therapist staring at his pencil.  He focused at a spor on the celing, listing to the pelt of rain on the thin roof overhead.

"Do you remember it now?" the balding doctor with the shaggy salt-and-pepper beard asked.

"I... I don't remember," Chuck said.  "I have a vague recollection, some faint memories, about being... excited.  About being excited for a football game, but not The Rivalry I expected.  It was being played... in a stadium I didn't recognize.  It was a dream.  A nightmare.  It had to be a nightmare."

"Go on," the doctor said.  "This is good.  Very good.  By confronting what.... happened last year, you can finally face up to it and defeat it.  Defeat your nightmare.  Defeat a year's worth of angst.  Defeat it."

"I... remember... a game," Chuck said, staring at the ceiling.  "It was a game played in the cold, in a strange unfamiliar stadium.  It was... a team clad in black.  I remember the helmets - I think they was white.  But Lehigh's was white, too.  I think."

"I think it was Lehigh's arch-rival in those white helmets.... Yes.  I remember.  The helmets were definitely white, with a maroon "L" on the side.  It must have been Lafayette, 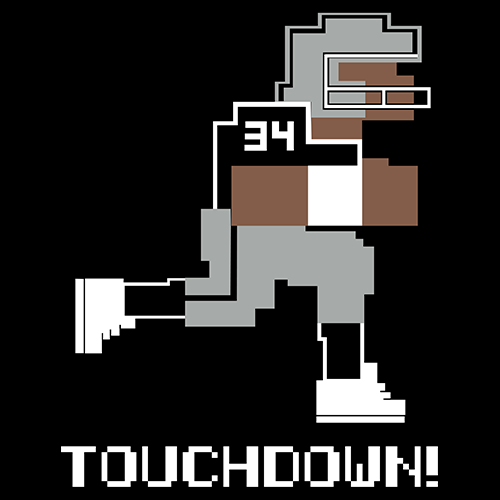 "But isn't any Lafayette team that was familiar to me that showed up that played Lehigh that evening," Chuck said.  "This Lafayette team... that running back... somehow, there was this player.  Number 39, or 29, some kind of 9.  I think... his name was... RB Ross Scheuerman.

"Only it wasn't Ross Scheurman,  This back - he... he... it's so hazy.  He started to look pixellated to me, kind of like a Techmo Bowl Bo Jackson.  He ran left, He ran right.  He ran up the middle.  Almost every play.  God, those runs.  Lehigh couldn't stop them - any of them.  So many of my dreams, Doc, had pixellated cleat marks on my face as I watched Lehigh - then myself - ran over, trying to tackle this blob of pixels that was real.  Or wasn't real.  I'm not really sure."

"Interesting," the therapist said, pretending to listen.  "Go on."

"I mean, Doc, this couldn't have been a Lafayette football team.  None that I had seen during the regular season, anyway.  You know, Doc, I do a lot of writing about college football in the Lehigh Valley, some people call it a hobby, anyway, and this Lafayette team I saw in this large stadium, a stadium neither Lafayette or Lehigh had played in before, it didn't resemble the one I saw in Easton on Fisher Field at all."

"Spending all that time writing about sports?" the therapist said.  "No wonder you're coming to me with an addled brain.  You're probably doing way too much of that, and you're creating these fantastical scenes in your head, where a good running back like Scheuerman becomes like, say, a member of the New York Jets."

"Steelers," I corrected him.

"Whatever," he said.  "In any event - you know this happened, right?  You know that Lehigh University and Lafayette College did indeed play a football game up in Yankee Stadium, the 150th meeting against the Mountain Hawks and Lafayette Leopards?"

"I looked up the records.  The Leopards I know, the ones I've seen, they couldn't have been that team.  They haven't finished over .500 since 2009, the famous game where the Mountain Hawks' LB Al Pierce intercepted that pass in overtime, and in the process lauched a few years of dominance, where Lehigh won Patriot League titles, and even knocked off a Missouri Valley team and a CAA team in the playoffs - on the road."

"You're rambling," the therapist said.

True enough," Chuck noted.  "Did you know that Pierce didn't even win the MVP trophy that game?  That it went to QB J.B. Clark, that would later transfer?  But the next year, though, Pierce would get it for another memorable performance..."

Chuck stared at the ceiling in silence.

"You see, Chuck, the only way you'll be able to see the past for what it was is to challenge the status quo today.  You can't do anything about the loss last year.  But you can finish things off today, now, on your day, and leave things better now than when you found it."

"I think that's all you need, Chuck," the therapist said.  "To fight through it, face it and defeat it.  Oh yeah, and stop all that obsessing about Lehigh Valley college sports.  That's a one-way ticket to a lot more visits to see me."

It's probably an understatement to call this season a disappointment for Lafayette Leopards fans.

It also started with tragedy.

TE Brian Keller, the elated player in the iconic picture on top of this preview, died in the offseason in a freak car crash.

Keller, whose final game in Yankee Stadium would be nearly as good as Scheuerman's, especially in regards to blocking for some of Ross' bigger runs, was a huge loss in both production and emotion for the Leopards.

Then came the injuries, coming in waves week after week.  In the run-up to one game, Frank Tavani's team lost a key player to injury in the walkthrough.  Guys recruited as defensive linemen became offensive linemen, out of necessity.  Some days, Tavani struggled to find enough bodies on gameday to fill a two deep, it seemed.

The Leopards started against two tough CAA opponents, William and Mary, who are a win away from the CAA title this year, and Delaware, who struggled to hover around .500 all season and lost to a non-scholarship team in their season-opener, Jacksonville.  Causing confusion was the suspension of some key starters at the beginning of the season, since reinstated, but it didn't help.

As a result, the 2015 Lafayette Leopards enter the 151st meeting with their arch-rivals 1-9 - however, not with a team that can barely fill out a two-deep.  Lafayette, with an extra week of preparation, has seen a bunch of key players come back that could make it a tougher game than it looks on paper.  Two weeks ago, at home, the Leopards looked like a much better team, even though they still fell 28-19 to Colgate.

"Lehigh is all we have left," senior TE Bobby DePietro said, one of those players who is coming back from injury. "Everyone realizes that. We have not given up at all, we're keeping everybody going, and it's good to see the energy is always there. We're 1-9, we know that, and we're playing for pride."

In the Rivalry, pride is a lot more than a cliche.

"It's going to be really emotional for us," senior LB Mark Dodd said this week.  "My message to the team Saturday will be to play together because it's the last time. (In the future) I know people will ask if I beat Lehigh. We've beaten them twice and we're looking for a third, that's for sure."

In the final game notes, there are few surprises.  As expected, junior QB Nick Shafnisky is the starter, as he was against Colgate, and freshman RB Dominick Bragalone, who left the Colgate game late with a possible helmet-to-helmet contact situation, apparently is 100% and ready to go.  Also - and this isn't on the two deep - freshman RB Micco Brisker is also supposed to finally be over his injury and will also be 100% for the big bowl game in the Valley this weekend.

Sophomore DE Harrison Johnson technically gets the "start" this week over sophomore DE Tyler Cavenas, but I wouldn't read too far into that.  Saying he "felt more comfortable" coming off the bench instead of starting, he'll still get plenty of work on the defensive line rotation.

On Rivalry Week, you never really know what sort of weather you'll get - negative temperatures and Green Bay-level end chills,  or Indian Summer.  This year seems like it will be closer to Indian Summer than Green Bay, with mostly sunny skies and a high of 51 degrees.  For late November, I'll take it!

Revenge is a dish best served cold, a fact that all Lehigh football can agree about.  Another morning cocktail that is also best served cold is something called Blood Orange Punch, something that seems oddly correct in terms of this weekend's matchup.  Not too hipster, not too gruesome, it hits the perfect note for Lehigh beating Lafayette.  In fact, perhaps, we can call it Dead Leopard Punch, just this once.