Heartbreak in Hamilton As Lehigh Can't Get Last Five Yards, Fall 49-42 To Colgate 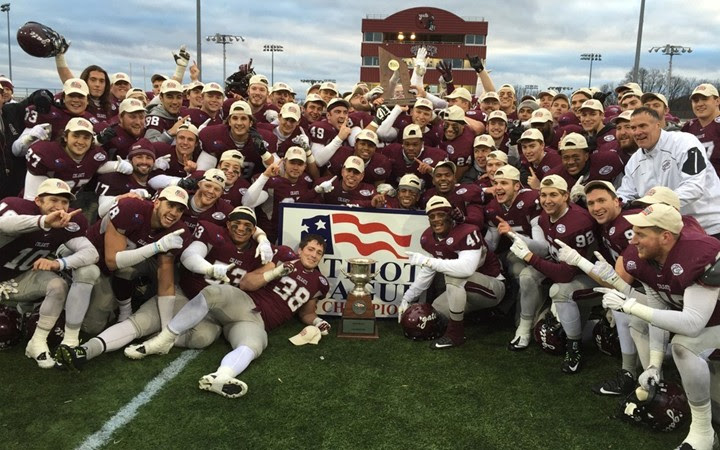 With all the offense, with all the touchdowns, with all the passing yards by junior QB Nick Shafnisky, all the rushing yards from freshman RB Dominick Bragalone, all the plays, all the yards of offense gained, and allowed, it came down to five yards.

1st and goal at the five.  A minute to play.  Five yards from the end zone, five yards from the opportunity to come from behind and make the score 49-48, and then to have freshman PK Ed Mish trot out and attempt the game-typing extra point, to tie the score for the seventh time on the afternoon, or possibly try a two-point conversion to get the win.  Five.  Yards.

It came down to four shots from five lousy yards.

The game was a thriller.  A classic.  Both Colgate, who would clinch a share of the Patriot League championship today, and Lehigh, who wouldn't, were incredibly evenly matched.  Every time Colgate scored, Lehigh responded with a touchdown of their own, never trailing by more than a score, but never leading, either.


"It's hard to face these kids, these seniors especially," a somber Lehigh head coach Andy Coen said. "We were trying to keep a real important string alive and just came up a little short. There were two good football teams.

The box score shows how good, and how even, both sides were.

Both sides turned over the ball once apiece, and punted once apiece.  Both were penalized twice - for 25 yards apiece.  Total offense, essentially, was a dead heat - 503 Lehigh yards versus 489 Colgate yards.

"The kids competed well on both sides," Coen continued.  "Someone's got to win and someone's got to lose and unfortunately we were on the wrong side of the ledger."

Lehigh won the toss and deferred, and - extraordinarily - would swap touchdowns the rest of the afternoon, never trailing by more than seven, and tying the Raiders six straight times.

Freshman RB Dominick Bragalone would have a monster day against a Colgate defense that had just held a Walter Payton award candidate RB Chase Edmonds to a sub-100 yard day.  Bragalone would have 164 yards and 3 touchdowns, including a 62 yard scamper that was spring by a great block by sophomore WR Gatlin Casey.

Each touchdown was a dramatic response to each Colgate touchdown lead, set up by a relentless Raider offense that was able to continuously gain good ground on the Lehigh defense all afternoon.

You have to go down to the bottom of the stat sheet to see the stat that would ultimately matter the most: fourth down conversions.

Colgate was 3-for-3, and happened to score touchdowns on all three fourth down attempts.

QB Jake Melville converted 4th-and-1 and 4th-and-3 conversion attempts through rushes, fooling the Lehigh defense and scoring impressive touchdown runs of 28 and 13 yards to account for some of Colgate's scores.

The third was a 4th-and-1 run by RB Demetrius Russell that made the score 35-28 in the 3rd quarter.

Melville, Russell, RB James Holland and RB John Wilkins would combine for 313 of Colgate's 316 yards rushing on the afternoon.

Lehigh's conversion rate, though, on 4th down was only one for three.

It so happened that one of those conversions came from junior QB Nick Shafnisky on the final drive of the game, keeping a game-tying drive alive with a 3 yard run.

It was the type of gutty run that epitomized this Lehigh team on this day.

On the prior play, Bragalone, Lehigh's leading rusher and the ideal back to convert a 4th-and-1 play, went down after some contact from the Colgate defense.  With him out, someone else would have to convert the 4th down, despite the 4,000 or so fans on their feet and the Raider sideline all bouncing in tandem, thinking that they had the game in hand.

Instead, Shafnisky got the ball, got a lead block from junior FB Mackenzie Crawford and a huge push from the offensive line, and kept the drive alive.

Two quick passes would get to the 5 yard line, and the Mountain Hawks would throw the ball four times to get that final touchdown to try to tie the game one last time, one final shot at the championship.

But Colgate's defense, who wisely double-teamed Pelletier, stuffed Crawford short of the end zone on the next to final play.

It was a game of incredible fight by both teams.  It was a game that earned Colgate the Patriot League championship, and they earned every yard.

It was a position that few people expected Lehigh to be in back in August.

It was a game separated by five yards.