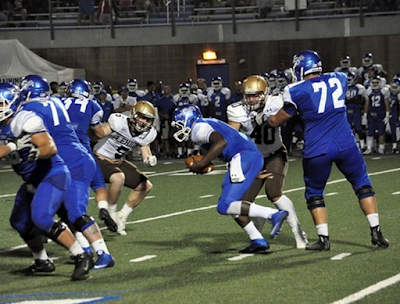 It's a season where Lehigh is supposed to be turning the page from a disappointing 2014.  Every player interviewed so far has said so, from senior TE Chris Ruhl, junior QB Nick Shafnisky and the rest of the team.

In a strange sort of way, 2014 was buried by a different sort of numeric combination.

The Mountain Hawks would win their first game of the year by the poetic score of 20-14, in the process finally putting the final shovelfuls of earth on top of last year's disappointing season.

It's not so much the win but the way it was won - won with a strong defensive effort that very nearly shut out the Blue Devils in the first half, won with a game-clinching drive that ate up the clock when a stalled drive might have opened the door for more, won with a kicking game that turned in critical points that were the difference between winning and losing.

Last year, Lehigh found ways to lose.  Tonight, the young Mountain Hawks found a way to come together and finish the game when it was on the line.

Not a bad way to bury the corpse of last season.


"We talked to the kids about tonight after dinner," Coen said after the game.  "We said that they've really done everything we expected of them and asked them to do, really from the time we turned the page from last year.  We had a great group of guys here over the summer, and they've done everything right, and they deserved to win.  And I'm actually glad they won a game like this, because we could have given that back, like we did a bunch last year."

From Central Connecticut's opening drive, the Lehigh defense set the tone for the entire game.

That drive would be the first of six Central Connecticut drives that would end in punts, and after two Lehigh drives ended in turnovers, the defense held firm each time.

After a scoreless first quarter, Lehigh would strike first.  Shafnisky would find junior WR Trevor Soccaras on back-to-back passes for 31 total yards, and then Shaf would fake a handoff and bust through the middle of the line, taking it in himself for a 22 yard touchdown run.

The Mountain Hawks would then take advantage of a key miscue by Central Connecticut's punter, who elected to slide just short of the 1st down marker on a fake punt attempt.  Five plays later, Shaf would evade intense Blue Devil pressure and find sophomore WR Gatlin Casey, who made a spectacular juggling catch to give Lehigh the 14-0 lead.

Casey would haul in 7 passes for 67 yards, many coming after sophomore WR Troy Pelletier left the game with a thigh bruise.  Soccaras would nab 6 passes for 80 yards.

"It's always good to get the first win out of the way," Casey said after the game.  "On offense, we didn't play as good as we could have, but we got it done.  We came together as a team and we worked our butts off this summer.  We had to change things, and we did, and it felt great to get that win under our belt."

After that second touchdown, junior LB Colton Caslow would keep up the defensive pressure, getting 3 tackles, including an assist on a key running stuff on a 3rd-and-7 to force yet another punt.

The stop was important, as it allowed another deep drive ending in a 24 yard field goal by freshman PK Ed Mish, who was playing in his first Division I game.  Suddenly it was 17-0 and the Lehigh defense was pitching a shutout.

"It was exhilarating to realize that we had a potential goose egg on the board," he said.  "We just said we needed to keep playing football and keep doing what we were doing."

The goose egg would not last, the defense giving up a touchdown pass to CCSU WR Joey Fields to cut the deficit to 17-7, but the defensive pressure and defensive stops would continue the entire second half.

Lehigh would take the second half kickoff, converting a second Ed Mish field goal of 27 yards to go up 20-7, and then the defense continued to put Central Connecticut's offense in a vise.

Three straight Central Connecticut drives were stuffed.  The third, set up by a short punt from senior P Austin Devine, was stumped by a three play segment where Caslow stuffed RB Devon Lofton on 2nd and 9, Stubbs and senior DE D.J. Bourgeois denied Pauldo on 3rd and 7, and senior NG Greg Palma put immense pressure on Pauldo on a 4th down incompletion that would give Lehigh the ball back on downs.

"I was really proud of how we performed tonight," Caslow said afterwards.  "It was just a lot of fun to finally get to hit someone else.  My boys made me proud, coming up to make plays.   It was definitely a big turnaround from last season.  It was a big exhale for us to be able to shut them down as many times as we did."

"We made change the better fit out personnel," Coen said.  "Colton, junior LB Pierce Ripanti, the defensive line... They did a great job getting after the quarterback and making him feel uncomfortable."

Still, the game was in doubt all the way through the 4th quarter.

Central Connecticut would finally break through with a 9 play, 70 yard drive, ending with Pauldo's pass to a wide-open WR Dan Hebert, making the score 20-14.

With 3:47 left, it was a critical time.  So many games last season were "given away", as coach Coen put it, in situations like this.  Lehigh needed to put the Blue Devils away, and they did.

The "North B" and "South B" combination of freshman RB Dom Bragalone and freshman RB Micco Brisker got a lot of key yards during the game, but none more crucial than the 36 yards they would collectively gain at the end of the game, getting the first downs and yardage the Mountain Hawks would need to put the game away.

Brisker would carry the ball 11 times for 34 physical yards, while Bragalone would amass 114 all-purpose yards, 68 on the ground and 46 through the air.

"This time the kids fought through it with a lot of freshmen making big plays for us, finishing the job," Coen said.  "Central Connecticut had a lot of guys on the line of scrimmage, and it was tough, but those kids, they kept banging away at it, and our linemen did too, and we got the win."

20-14 was indeed a gratifying way to bury the prior season.