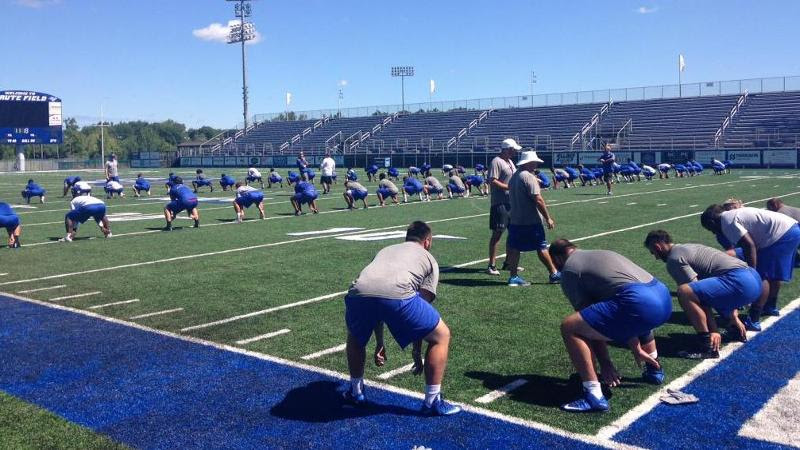 Offseasons are long after season-ending losses to Lafayette, but it seems like no game after a Lafayette loss has been as anticipated as this one.

All offseason - and I've been as guilty of this as anyone - there's always been question for the Mountain Hawk football team concerning a football game played last November:

"Did you actually watch a tape the 150th Rivalry game in Yankee Stadium last November?

"What was your reaction?  Did you toss the DVD out the window, or set it on fire?"

"Do you think about that loss every day, or simply once a week?"

This Friday up at New Britain, Lehigh football players and their fans will finally have something to talk about that doesn't involve that infernal game in the Bronx last November.

Oddly enough, they are facing a team that comes from a similar place.  The Central Connecticut State Blue Devils, 3-9 last season and in their second season under head coach Pete Rossamondo, wants to erase the memory of a six-game slide that doomed their 2014 season.

Sure, they will remember with fondness last year's season opener, where they stunned No. 7 Towson 31-27.

And unlike Lehigh, they will remember their last game in 2014 as well, where they sent off their seniors with a win in a 22-17 win over St. Francis (PA).

It's that middle which they would rather forget.

Aside from a win over hapless Rhode Island, the Blue Devils struggled mightily with consistency, going 1-9 and losing resoundingly to teams like Holy Cross, Dartmouth, and - more surprisingly - Howard.

"We weren't consistent," Rossomando said in the spring. "That's the main focus, to be consistent in the process. We had good players. They just didn't understand the process of winning. Everyone thought we beat Towson and then we'd just beat everyone else. There are 11 distinct chapters in a season."

Rossomando, in his second year in New Britain after spending time rebuilding D-II New Haven, thinks his talented players have turned the corner in regards to what he is trying to do.

"It was much better," he said. "Our guys are finally understanding the process. They understand the system, the coaches, and there's not as much guess work. If they're out there now, you know they've made a commitment to being a Division I football player both on the field and off the field. In that way, we're so much different right now. They need a kick in the tail like any team, but I know their hearts and minds are in the right place."

"We've got dudes riled up trying to compete and get better every day," junior LB C.J. Morrison said before the season. "We had a lot of guys stuck in the old system [last season], a lot of guys not buying into what Coach Ross was trying to bring, and it showed on the field. Attention to detail wasn't there and effort wasn't always there. I feel like the team we have now, dudes, especially after this spring, we are just a unit, finally. Finally, a unit."

CCSU's efforts to find "dudes" who can play seems to echo Lehigh's offseason in an interesting way.

One of the takeaways from this summer preseason session is the energy and buy-in that everyone on the Lehigh sideline seems to have.  It's hard to say if it is just a practice thing, but it seems likely that the enthusiasm will carry over into the opener.

Lehigh will need it.

Last season, the Mountain Hawks came tantalizingly close to knocking off a team in the CAA that would ultimately be nationally ranked, James Madison.  They jumped to an early lead, but couldn't finish them off, seeing a game-tying FG attempt blocked in a heartwrenching 28-25 loss.

The Mountain Hawks had the lead and momentum going into halftime, but a lightning delay seemed to electrify James Madison a lot more.

But underclassman mistakes played a big part, too, including some key special teams plays.

"Coming out the lightning deal," head coach Andy Coen said, "I feel we made a bad decision running the ball out of the end zone.  We should have just downed it.  Instead, they got good field position after the punt.  I think that hurt."

This season, going into the 2015 season, Lehigh is looking to see what a bunch of underclassmen - some of them true freshmen - can do.

They have been mentored by the seniors, but they will have to play well for Lehigh to have a chance on Saturday.  And a running start is critical to both teams' seasons', but especially the Mountain Hawks.  An early victory would do wonders for momentum going into a game the following week against nationally-ranked JMU.

Ironically, it may be the freshmen on Friday that will erase the memories of 2014 once and for all - the guys who weren't playing at Yankee Stadium.

The game notes this week reveal Lehigh's new depth chart, which I discuss in a lot more detail in my 2015 season preview.  The short version is that it involves a surprising number of underclassmen, including a special teams unit that is almost completely comprised of freshmen.  Freshman P/K Ed Mish will be kicking off on punts and kicks, and freshman KR Mike Gies and freshman KR Donavon Harris will be returning kickoffs.

It is extremely likely that the first Lehigh football player to touch a ball this season will be a true freshman.

As of today, the weather report is showing a perfect Friday evening of football in New Britain - perhaps even feeling like fall weather.  With a 7:000 PM kickoff, the scheduled temperature for the day is a partly cloudy day with a high of 81 and a low of 54.  I'm anticipating a near-perfect gametime temperature of 70. 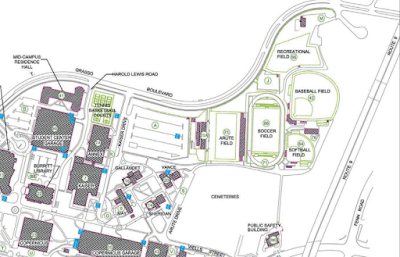 This week, CCSU posted some important tailgating information if you're planning on making the trip up to the Hartford area.


The construction of the new dining hall facility adjacent to the Arute Field Parking Lot will continue through January, 2016 and will effectively reduce the number of available parking spots in our primary Football game day lot significantly.  Thus, we wanted to provide you with the following parking information and recommendations in advance of the season to facilitate your visit to campus and our contests.

-The Arute Field lot [A, above] will still serve as the primary lot for home football and soccer games.  Parking and tailgating opportunities will be available on a first come/first served basis until the lot is full. We will continue to provide primary handicap parking and hold special functions in that lot as well.

-Secondary parking for football games will be also be available in the Student Center parking garage [SG, above] (also accessible from Ella Grasso Boulevard just past the new residence hall on the left)  and the adjoining surface lots.  Patrons parking here have a short walk to Arute Field by proceeding to  Ella Grasso Boulevard  taking a right onto Kaiser Drive and enter the Arute Stadium Parking Lot on the left.  TAILGATING IS ALLOWED IN THIS AREA BUT GRILLING OF ANY TYPE IS STRICTLY PROHIBITED IN THE GARAGE OR SURFACE LOTS.

-Additional Parking for Football games will also be available in the Copernicus Garage [CC, above], with easiest access from Wells Street (via Cedar Street/Route 175) on game days. Patrons parking here have a short walk to Arute Field by proceeding to Kaiser Drive (in front of Gym) and taking a right into the Arute Stadium Parking Lot.  Again, TAILGATING IS ALLOWED IN THIS AREA BUT GRILLING OF ANY TYPE IS STRICTLY PROHIBITED IN THE GARAGE OR SURFACE LOTS.

CCSU offers a larger PDF map in case the map renders too small, but the net is if you want to grill, it pays to show up early and get to Arute's main lot.  Otherwise there are two parking garages a short jaunt from the field.

His teams at Central Connecticut State went 23-5 when he was a player, and all three years he lettered the Blue Devils won the Eastern Football Conference, sweeping their then-rivals Southern Connecticut three straight seasons.

It was reportedly an old roommate from school that convinced Bagnoli, who counts Andy Coen as a former coordinator, to enter football coaching, meaning CCSU is indirectly responsible for one of the longest, successful head coaching careers in the Ivy League, odd as that may sound.

It's a new season after last year's season to forget, so it seems extremely logical to have the mind eraser as this week's Drink of the Week.

It may be as a result of having too many as an undergraduate (i.e. a couple), but upon researching this drink it was composed differently than I remember.

The modern day version consists of ice, vanilla vodka, and club soda - some say to layer the components and drink it through a straw.

I think I remember some lime being involved somewhere, too - but it's all too hazy to remember.

My version probably would involve a shot of lime juice in with the club soda, and not bothering with vanilla vodka - regular high-quality vodka would do just as well.

As always, Drinks of the Week have a place in responsible tailgates, but only if you behave yourself, don't get behind the wheel while impaired (or worse), and are over 21. Please do that.  And another warning - layered or not, mind erasers are pretty powerful.  Be extra careful.