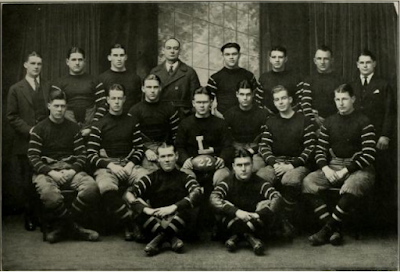 Lehigh was in a pickle.

Catholic (DC) had cancelled their game with Lehigh scheduled for October 7th, 1922, and the football team needed a replacement, fast.

Though it's not immediately clear if Charles M. Schwab, then-CEO of Bethlehem Steel, put in a call to the Saint Francis College and Ecclesiastical Seminary in Loretto, PA to fill in on Lehigh's football schedule, it is a distinct possibility.  After all, right hand man (and functioning chief operations officer) Eugene Grace was a Lehigh graduate and athlete, and little happened at Bethlehem Steel or Lehigh University that escaped the notice of both men.

St. Francis (PA), which only had 165 students enrolled at the school, had just restarted football for the first time under new head coach John J. "Speedo" Laughran, a former football star at Pitt.


So in a way, the muddy, drizzly game at Taylor Stadium was hardly a fair fight, a 37-0 shellacking that was mostly notable for Lehigh's awful kicking game.  Six touchdowns were scored, two in the first half but only one point-after touchdown was scored.

"It is quite possible that on a dry field the Brown and White would have run up a much higher score," the student newspaper reported.  "for many opportunities to score were lost to due to the slippery condition of the gridiron."  Robert M. Harper led the way with 3 of the 6 touchdowns.

Anonymous said…
Good Article, Schwab had a summmer home in Loretto.so I do not doubt he had some influence in geeting the game.
6:09 PM