QUICK RECAP: Up By 3, Lehigh Throws Out The Numbers And Finds A Way To Win, Beats Coglate 41-38 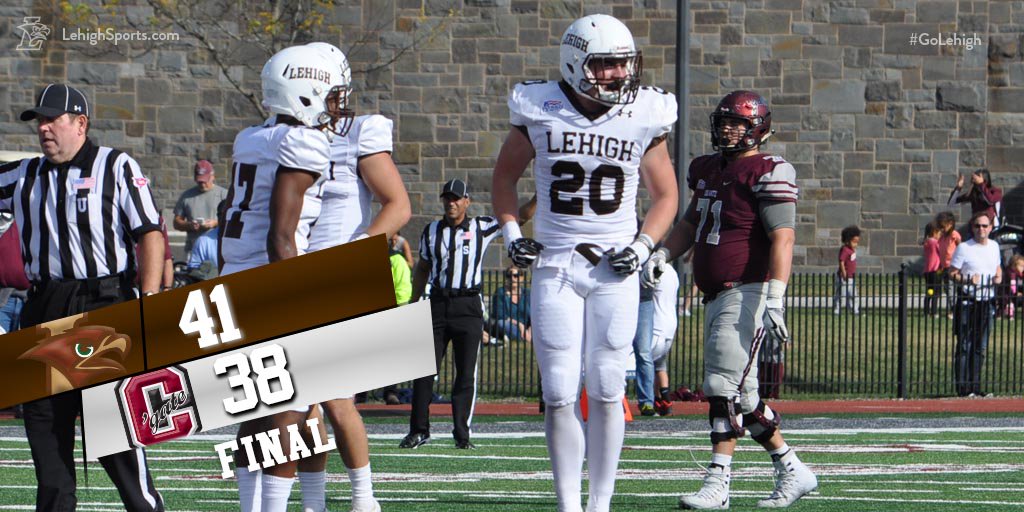 It was Colgate 28, Lehigh 14 as the first half was coming to a close.

The Mountain Hawks had the ball, but the pall over Lehigh fans everywhere was very evident - "here we go again," most seemed to be thinking.

You couldn't blame fans necessarily for thinking that way, of course.

The Mountain Hawks hadn't found out yet this year how to pull out a game like this, and normally, a two-touchdown deficit to Colgate feels like a four-touchdown deficit, the way they run the ball and gradually crush the spirit of opposing teams.

And then, gradually, over the course of a half of football, Lehigh put mistakes behind them just as the uncharacteristic mistakes by Colgate seemed to mount.  One Colgate touchdown would be called back.  Then another.  And Lehigh would battle back to tie the game twice, fall behind by a field goal with 5 minutes to play, and then score the winning touchdown and get a game's only turnover at the exact right time to preserve the win.

It was a win Raider fans - Oakland Raider fans, that is - would have loved.

Behind an amazing 186 yards rushing by Bragalone, the Lehigh offense managed to match Colgate score for score when it most.  In a must-score situation - his second of the game - his 53 yard run to start the second half tied the game at 28 and kept Lehigh close.

After a 66 yard touchdown pass from Colgate QB Grant Breneman to WR Tre Caine, putting the Raiders back up by 7, Lehigh threw out the stat sheet and did what they had to do to drive down the field, with Mayes making a great pass to freshman WR Jorge Portorreal to get to the Coglate 5, and then junior RB Micco Brisker would find the end zone to tie the game - his third rushing touchdown on the afternoon.

Colgate would grind out a typical Colgate drive to chew up the rest of the second half, ending in a short FG to regain the lead with 5 minutes left to play.

And then Mayes, throwing out the reality of that field goal, drove the length of the field, throwing a pass up in the air in a place where only senior WR Troy Pelletier could catch it - where he fell into the end zone for the go-ahead score.

With a lot of time left, and the Raiders driving towards a game-winning score deep in Lehigh territory, Colgate, despite all the overturned touchdowns and all the penalties and all the offensive progress, was in a position to tie or win the game.

Instead, Colgate fumbled, and junior LB Mark Walker cleaved onto the loose ball, and gave Lehigh a chance to run out the clock.  And after Mayes would find Pelletier on a huge 3rd down conversion, Lehigh could go into victory formation and get their first win on the season.

Of Pelletier's 8 catches and 132 yards, it was that last one catch for 10 yards that was the best of the season for all of Lehigh Nation.

"Brad Mayes made really, really good decisions," a thrilled head coach Andy Coen told the radio crew after the game.  "I'm prod of him.  In the locker room he became a vocal leader."

Andy also mentioned the most important aspect of the game - not the passing yards, not the running penalties, not the return yardage, not the turnovers.

Unknown said…
Beating Colgate is always a good thing but this win was special in breaking us out of a slump..Wonderful win. I see more to come!
6:53 PM