The Opportunity To Heal Without Permanent Scars

A lot of football teams in the middle of a football season have what is called a 24 hour rule in regards to the outcome of their games.  The rule is the win, or loss is to be celebrated/agonized over for 24 hours, and then it's back to work.

Like the No Cheering in the Press Box rule in the past, I violated that one this weekend.

After the Penn loss, I was mad in a way I hadn't been mad before.  Irrationally mad.  Talking back at the dog mad.  Losses affect me, some more than others.  And this one, for some reason, really hit me hard.

It was 5:00 PM on Sunday, the Eagles had just won on a 61 yard miracle field goal, and the Saints had just humiliated the Panthers on the road for their first victory of the season.  A Saints victory on the road, against a conference rival, something that, as a Saints fan, happens at about the same frequency as Super Bowl visits - and I was still mad about the game yesterday.

That was the point when I realized something was wrong.


"I can't believe you're taking all of this so seriously," my usually level-headed wife told me in bed Sunday night.

"WHAT?"  I internally yelled, instantly recognizing one of her really-it's-just-a-game-really moments.  "This is serious!  The fates are in the balance!  The 2017 season... the success... the football program... Patriot League championship..."

Of course, I'm not an idiot.  In times like this, she tempers my worst instincts, to make an 0-4 start into the next Hun invasion or the Biafra famine.  So I have to listen, and deep down inside, I could see her point.

When you look at the balance sheet of my life over the weekend, it was pretty good.  Birthdays were celebrated.  Drinks were enjoyed.  Family members came over and didn't have a terrible time.  The air conditioning, more or less, held up.  Laughter was had - even mine, on occasion.  A good time was had by all.

But to some degree it was a facade. Frankly, I was in a bit of a daze, even more than 24 hours later.  Losses, and especially a loss like this, affects me far afterwards.  I smiled and tried to keep up, but I was distracted, checking my phone and knowing the message boards would be lighting up all throughout the weekend.

It's been a strange weekend where football and life priorities have taken center stage. 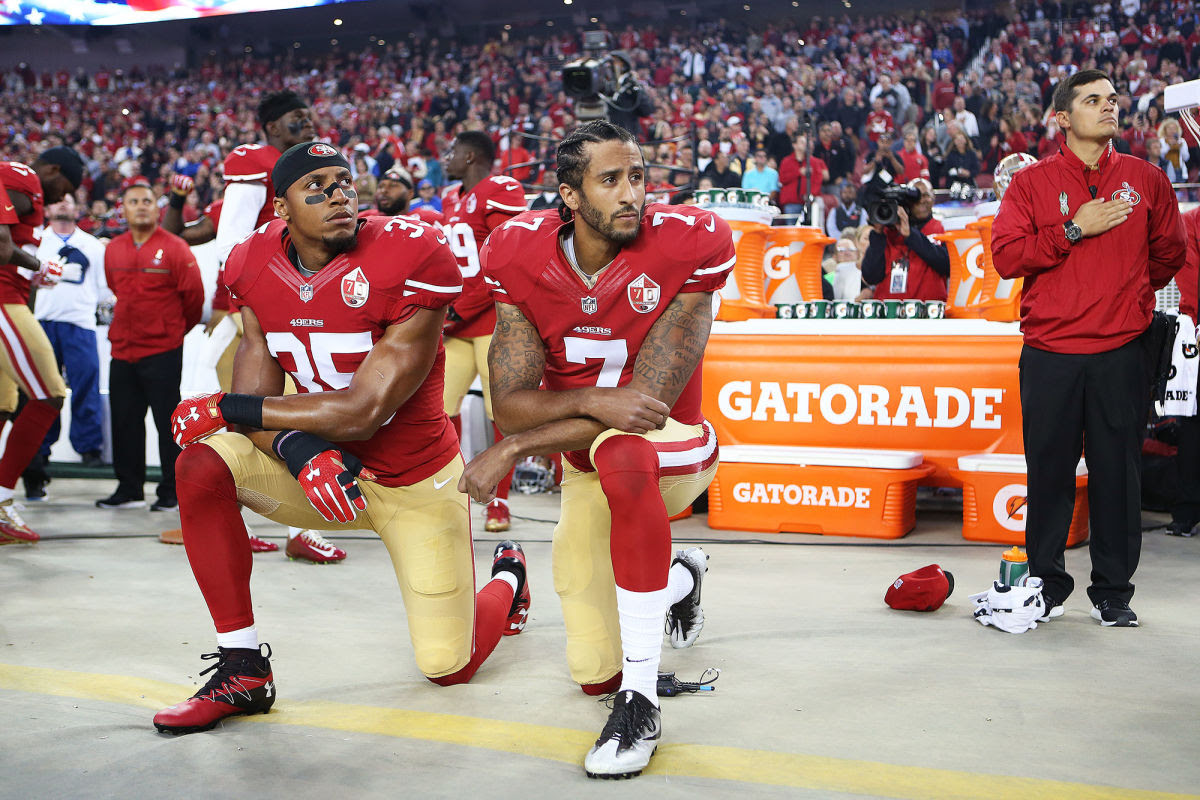 After President Donald Trump seemed to try to use his bully pulpit to goad NFL owners to fire their players who take a knee during the national anthem, much of the NFL world - players, coaches, and even owners - spent their weekend showing solidarity against the sentiments that President Trump was espousing.

I've looked at these protests before, and I've been left wanting, to be honest, by guys like Colin Kaepernick.  Like I said in my post on this last year, I'm more than willing to listen and help in some way, but the concrete actions to take when the national anthem is over are completely lacking to me.

President Trump, ironically, has done what the protests themselves were unable to do for years - galvanize a very large group of people to show their solidarity towards silent protest and expressing their views (which, to me, are still not nearly well defined enough).

Maybe both sides got their wish in the moment - Donald Trump made the kneeling protests all about him (as the villain), and the protesters all of a sudden saw their opportunity of their bully pulpit expand exponentially and solidarity to their cause confirmed.

The question remains, though, and it's the same question I posed last year - will all of these things amount to anything more than empty gestures?  If this ends up as just another empty gesture of defiance and no material gain towards making things better, this will simply end up a wasted opportunity just as it was last year, and every year until the folks doing the kneeling or locking arms get organized and do something concrete and positive.

Too often these days we cover the gestures and not the actions.  I hope that this weekend's games will signal a change in that area.

The anthem protests gave way to some thrilling NFL football, and even though I'm not an Eagles fan, the many Eagles fans at our house this weekend were thrilled by the 61 yard FG to beat their hated Rival the Giants - an awesome kick that made a hero over a guy who didn't have a permanent NFL job two weeks ago.

Instead, I was stewing, trying to figure out the maddest I've ever been after a Lehigh loss.

One of the downsides of being a fan for so long, having been a fan since my undergraduate days, is that I had a very rich buffet of bitter losses to choose from in terms of losses that were particularly excruciating.  Did the 2005 Jonathan Hurt Hail Mary Lafayette loss hurt more than the 2007 shellacking at home at the hands of Holy Cross?  Was the agony of the "Its supposed to suck, and it's supposed to hurt" 2013 Lehigh/Lafayette game more or less than the 36-21 humbling in the 1989 Rivalry game?  Was the 1994 Lehigh/Lafayette game where RB Erik Marsh ran for 5,000 yards and 43 touchdowns against Lehigh more or less agonizing than the 77-14 shellacking in 1993 to the Idaho team led by QB Doug Nussmeier?

Taking a step back, it does seem just a shade ridiculous to be so caught up in things like that when Puerto Rico is in utter devastation after Hurricane Maria, not to mention Houston's, Cuba, the Virgin Island's and South Florida's rebuilding efforts after this entire hurricane season.  And that doesn't even could Mexico, encountering unimaginable pain after a series of earthquakes.

In reality, this loss, and the prior three, are a black eye to Lehigh pride and a sign of things that need to be fixed, but they pale in comparison to the losses I described above.  That's because the Mountain Hawks of 2017 still have a chance to be in a position to win and do something good with the season, as unlikely as that feels at this very moment.  The truth is that black eyes can heal in September.  The Jonathan Hurt reception, though, leaves a scar.

If I have a message to this 2017 football team and staff, it's to let nothing in this season leave a scar.  So far, this team has been beat up, humbled, and not meeting expectations.  But all the wounds are either self-inflicted or something that can heal without a scar.

Season scars happen in big losses to Rivals and humbling conference losses that knock them out of the goals of the year.  That's what happened in all of those losses I mentioned above.  But even though it hurts, and people feel banged-up with pride wounded, there is the opportunity still for all of that to heal.  There are no permanent scars on this team yet, and there is the opportunity, still to emerge from the season free of those scars.

It's in that vein that I'm heading to Staten Island this weekend, to see how this team will heal.

Anonymous said…
Nice thing to say gmeacher1, but these aren't just a few bad losses-(like every other year). LU has been giving up over 50 freaking points per game in the last 3 games, to average to poor FCS teams. The Nova game was incredible in hindsight- the fact we stayed with them, even though they were running wild with a fairly average running game and subpar offense this year.

When we lost to HC in 2007 giving up 59 points to a great QB and offense, it was one of the most shocking things many of us could imagine ever happening at Goodman, coming off so many great LU playoff seasons before that. Giving up massive points and yards seems now to be the norm. These recent ones are losses where the opponent assumes they will score, unless they turn it over or get penalized. Cannot even listen to the radio broadcasts- Matt Kerr has this knowing tone in his voice that the opponent is likely to hit a long run or pass, or score, on virtually every play. Bottom line, and I will hold to this- if Lehigh beast Holy Cross this year and gives up less than 30 points in the process, I think it will be the most amazing FCS result of 2017, and yes it will be sweet. Not quite on the level of LU beating JMU or Sam Houston, but up there.... HC destroyed a very good NH team and program already.
11:35 PM