The Missed Opportunity: Lehigh Falls to Villanova, 38-35, In A Winnable Game 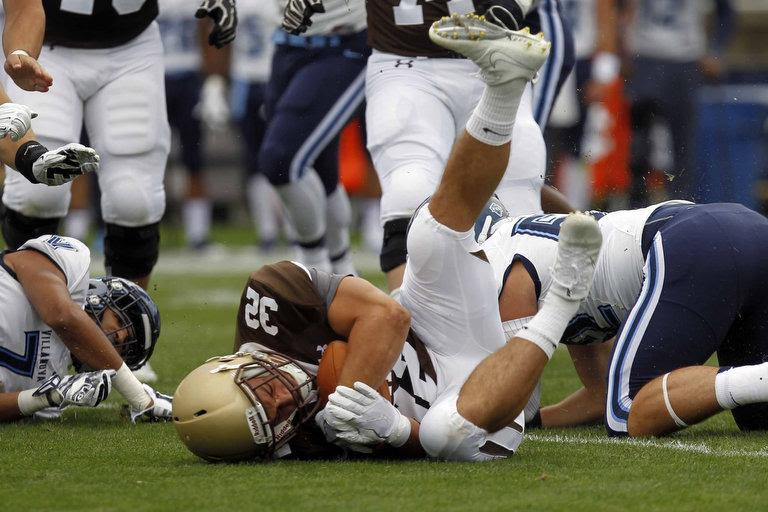 Head coach Andy Coen would hear nothing of moral victories in the post game press conference.

"I thought we had every opportunity to win this football game," Lehigh's frustrated head coach said.

"When you go through this stuff," he said, flipping through the pages of the post-game statistics packet, "you're going to see a lot of mistakes.  You see it with some young guys, guys in their first game, but we had some guys that where it was just out of character."

It was a game where neither side looked like they were in mid-season form, though you could see the quality shine through offensively on both sides at different times.  So the outcome hinged on mistakes, and who made fewer of them - and that team was Villanova.

That shouldn't take away from the offensive fireworks on both sides.

There was the tremendous blocking up front that set up a great rushing day for Villanova RB Matt Gudzak, who ran for 145 yards and 2 touchdowns, and an effecient all-purpose yardage of a day for Wildcat QB Zach Bednarczyk, who went 17 for 23 passing and scored three touchdowns, two through the air and on the ground.

And there was the electricity of junior QB Brad Mayes repeatedly connecting with senior WR Troy Pelletier, senior WR Gatlin Casey, and the newest starter in the receiving corps, junior WR Luke Christiano.  Mayes went 33 for 49 passing for 406 yards and 4 touchdowns, and some of them were a sight to behold.

Yet it would boil down to mistakes - a pass here with too much mustard, a dropped reception there, a missed assignment there - and Lehigh simply made too many of them to beat a quality Top 10 ranked team at home.

"After the game, and we all got in our circle," coach Coen said, "and I just told them all, you guys need to look into your mirror, and see how you feel about what you did or didn't do right.  They were a very good football team, and I give them a lot of credit - they were very fast, and very physical.  This was an opportunity for us to beat a very good Villanova team, and also an opportunity to beat someone from the CAA, which I thought would be very important for us.  We didn't get it done."


If you only looked at the stat book and you didn't attend Murray Goodman, you'd have maybe thought that the game was crisper than it actually was.

After all, there were only two turnovers in the game - one costly muffed punt return by Villanova and one very costly fumble by Lehigh.

Both teams had a ton of offense - Lehigh had 484 total yards, and Villanova had 475.

And the final score was close: Villanova 38, Lehigh 35.

But the stats obscured a game where both offenses and defenses were getting punished dearly for mistakes - and a couple of missed drives on offense and missed blocks or tackles on defense were costly.

"I don't really look at stats," Mayes said afterwards. "We started out slow, and when I came out the first couple of drives, I was not myself.  After getting the first hit and completing the first pass, we started getting the ball rolling a little bit, but in the grand scheme of things, we came away with a loss. That sucks."

Indeed, after Villanova came out and at scored right away, on a 4 play, 67 yard drive, Mayes and the offense only achieved one first down on their first two cracks on offense.

But after shaking off the rust, Mayes started to find his rhythm to Lehigh's first touchdown, spreading the ball around to senior WR Troy Pelletier, senior WR Sasha Kelsey and junior WR Luke Christano before junior RB Dominick Bragalone burst through the middle for a 4 yard touchdown run.

Christiano had a breakthrough game at slot reciever, leading the team in receiving yardage with 8 catches and 143 yards, just barely outperforming Pelletier, who ended his day with 11 catches for 141 yards.

"In the beginning of my career, I had a lot of injuries and stuff," Christiano said afterwards.  "but I never let that get me down.  I just worked hard in the spring, and continued to work hard in the fall with all the other receivers."

Four times Villanova went ahead by more than a touchdown, and all four times Lehigh's offense rallied to cut the deficit to one score.

But Lehigh's best opportunity at tying the game came right before halftime, when the Mountain Hawks were down 21-14 and in the red zone, knocking on the door.

The usually sure-handed Bragalone took an inside run and fumbled, and Villanova recovered, returning the ball all the way for a score that was called back after a Wildcat player was flagged for blocking Christiano in the back on the return.

But one play later, Gudzak would score on a 33 yard run, putting Villanova up 28-14 at halftime and putting the Mountain Hawks seriously behind the eight ball.

“It was mostly execution,” junior LB Matt Butler said, who was making his first start and had a team-high nine tackles. “When the bullets are flying, we’ve got to slow it down and read our keys and follow a couple of things you have to do on any given play. Not to take anything away from Villanova, but the first three or four touchdowns they scored were on blown assignments.”

The momentum shift was a terrible blow, but the Mountain Hawks showed they were not going to go away with a spectacular 66 yard Mayes-to-Christiano connection where Luke beat a potential future NFL player, S Rob Rolle, to get the score.

"That was just a hurry-up play that we ran," Christiano said.  "I got a step, and Brad gave me a great ball, and I just ran."

But as soon as the crowd on 5,816 on hand started to get revved up, Villanova responded with a big scoring play of their own, when Bednarczyk would find WR Taurus Phillips over the middle of the defense and he would put on the jets for a 75 yard score.

The defense would start to pick things up after that touchdown, limiting Villanova to a field goal the rest of the way and giving the offense a chance to get the winning score.

"I think we showed signs of being a really good defense,"  Butler said.  "We're just going to continue to get better, and down the road, I think we are going to be an elite defense in out league.  We've got to clean up the little things, and can't make as many mistakes.

And Mayes and the offense kept inching closer, especially when senior WR Gatlin Casey would nab two highlight reel touchdown grabs - one with a defender all over him, and the other on a tip drill where he showed how he can adjust on the fly.

HIGHLIGHT: Gatlin Casey scores his second TD of the day off the deflection to make it a three-point game pic.twitter.com/LwDtezEzpe
— Lehigh Football (@LehighFootball) September 2, 2017

Yet despite the offensive fireworks, despite the four rallies from being down more than a touchdown, Lehigh came up just short against the No. 9 team in the nation at home.

Nobody in the post game press conference saw it as a positive.

"I'm not looking at this game as any type of moral victory," Coen said. "What we've been here for a long time is winning football games and we had an opportunity to win a game today and we didn't get it done.  But we're going to move on, and we're going to be better."