QUICK RECAP: A Tough Gut Punch To the Mountain Hawks, A 46-27 Defeat to Monmouth 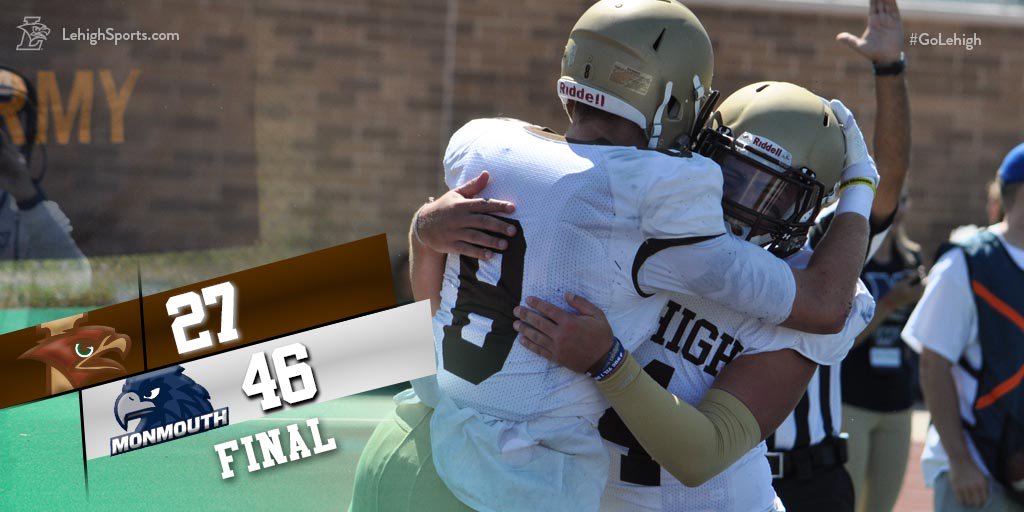 It pretty much started with RB Pete Guerrerio's 70 yard kickoff to open the game, and continued throughout a bruising, physical football game.

Lehigh would battle back from a 14-0 deficit to take the lead at halftime, but ultimately surrendered the lead as a physical beating took its toll and Monmouth got 4 straight rushing touchdowns, which allowed them to bowl their way to a 46-27 win over the Mountain Hawks.

Mayes would eventually find senior WR Troy Pelletier to break Lehigh's all-time receptions record with 238, but it had to be a bitter milestone to reach as the Mountain Hawks were held to 6 points - a touchdown, and a missed extra point - in the second half.

"Basically, they were a better football team today," a crestfallen Andy Coen said afterwards.  "They want to run the ball, and chew up the clock, and that was very evident here today, that's why they were the better team.  We did a very poor job of 1st downs, we did a very poor job on 3rd down conversions - we didn't get it done.  And to make it real embarrassing at the end, the quarterback fumbles right when we're trying to get back into it a little bit, and throw the interception in the end zone."

Mayes didn't turn over the ball until late in the game, but both were costly when the Mountain Hawks were trying to get back in it.  He'd still throw 3 touchdown passes, one a rifle to Pelletier, and a second highlight reel-like grab to senior WR Gatlin Casey, but it wouldn't be enough.

Junior WR Luke Christano would be the reason for those six points in the second half, where, for the second straight week, he had a highlight-reel catch of a throw over the middle by junior QB Brad Mayes for a 54 yard touchdown strike.

But Monmouth registered 351 yards rushing and scored 6 rushing touchdowns of 6, 71, 8, 4, 31, and 4 yards.  Three of them came from RB Devell Jones, who was the goal line vulture with 3 scores and 28 yards rushing, while Pete Guerrerio and RB Michel Jolly added 3 more touchdowns with a variety of big plays.

"Lehigh's a fine football team, we knew it was going to be a tough game, a four-quarter football game," Monmouth head coach Kevin Callahan said afterwards.  "We we were preparing our guys all week for that sort of game, and we came out fast, just like we wanted to.  After Lehigh scored first in the second half, I was happy about the way that our team responded, we answered that and from that point on we put the pedal to the metal a little bit."

Tune in later for a longer recap and more post-game reaction.

Unfotunately the LU defense is on par with some local HS squads. No pressure, no physicality, blown off every snap. Have no idea how you fix a team that is easily manhandled on every play.
1:45 PM