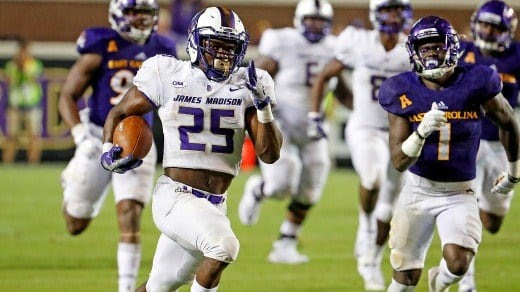 I don't officially vote in any of the FCS Top 25 polls, but I do share who I think deserves to be in the Top 25, and this week, unsurprisingly, I think James Madison was, and still is, the No. 1 team in the nation.

Not exactly going out on a limb, am I?

If you try to pick FCS games, one of the easiest picks of last week was to take the Dukes to upset the Pirates.  Pretty much all the experts across the board thought that James Madison, even with some suspended players, was stacked enough to take over rebuilding East Carolina, and boy, did they ever.

Remember the days when FCS vs. FBS matchups were defined by the FCS teams "wilting" in the fourth quarter?  With upper-echelon FCS teams like James Madison, that myth has been debunked for a while, but it was brutally apparent in this game, when RB Cardon Johnson easily eluded East Carolina tacklers on two 80+ yard touchdown runs.

That didn't surprise me at all this weekend.  And they're still my No. 1 team.


If you are looking for a nice, concise recap of the top games last week with video highlights - all in one, convenient post - you can look at CSJ's FCS Week 1 Recap and get the information.  There are highlights in there of Villanova at Lehigh you probably don't want to relive, but other games, like Howard's upset of UNLV, Nicholls' last-second FG win over McNeese State, and Tennessee State's strong win over Georgia State, are also represented.

Biggest Omission: Illinois State.  This has a lot to do with my policy to not have more than 5 teams in any one conference in my Top 25 unless it is unavoidable.  This is because I feel strongly if you finish 6th in your conference you are not a Top 25 team.  However at least part of this is due to....

Biggest Up-And-Comer: Western Illinois.  It is not easy to start the season on the road and get a win, but it's even harder to come out and just dominate the game from start to finish.  And that's what the Leathernecks did, holding the Golden Eagles' not-all-that-bad rushing attack to 0 net yards.  To me, their victory sent a real message to the rest of the Missouri Valley that they are for real.

Biggest Win:  How could it be anyone but Howard, and their stunning, out-of-nowhere upset of UNLV?  Yes, I knew QB Caylin Newtwon would be starting for the Bison, and yes, I was aware of his famous brother, QB Cam Netwon.  I was also aware that Mike London was the head coach that was the man charged with rebuilding the Howard football program, and that he didn't only win an FCS National Championship with Richmond, he also knows a thing or two about upsetting FBS programs.  But nobody, and I mean nobody, saw this upset coming.

Biggest Loss: I continue to feel really bad for Maine.  It's bad to lose a conference game.  It's bad to lose a close game to your closest and most bitter Rival.  But it's made infinitely worse when that game is the first game of the season on a Thursday.  I have no idea whose hare-brained idea it was to have the loser of the Maine/New Hampshire game to be out of the CAA conference race before actual Labor Day, but they should be held accountable for this decision.