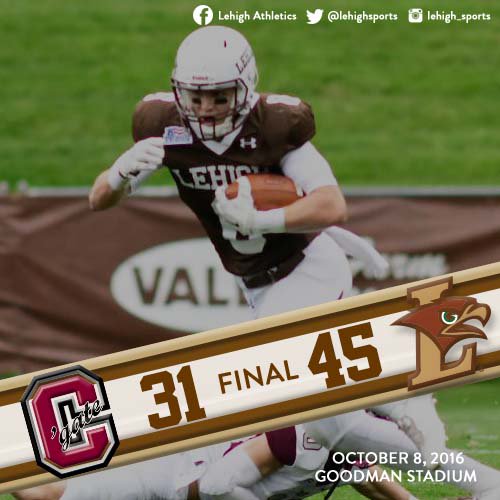 In all the pregame talk about an offensive showcase, we all forgot about how defense might be critical for the winning team in this important Patriot League Lehigh and Colgate clash.

Many saw the previous box scores and just assumed that Colgate's powerful offense, who put up more than 50 on Yale, would do something similar to the Mountain Hawks defense.

After a 75 yard touchdown run by Colgate QB Jake Melville to start the game, the Lehigh defense forced two enormous turnovers, including a forced fumble by sophomore SS Sam McCloskey that was recovered by freshman FS Riley O'Neil on Colgate's first drive of the second half.


The play would allow Lehigh to tie it up with a 25 yard FG by sophomore PK Ed Mish, and it would fire off a string of 17 unanswered points that would give Lehigh a 31-17 lead that they would never relinquish.


After cutting the deficit to 31-24, junior WR Gatlin Casey, who had a day of days on offense, took the ensuing kickoff 93 yards to to end zone, making it 38-24.

Casey who racked up 196 yards receiving and 3 touchdowns from senior QB Nick Shafnisky, also added 195 yards in returns, giving the Florida native 389 all-purpose yards on the day and 4 scores.

Shafnisky, who went all the way this week after sitting out last week due to injury, went 27 for 40 passing for 394 yards and a career-high 5 touchdowns on the afternoon in front of 9,255 fans.

In addition, a sliding grab in the second half by junior WR Troy Pelletier gave him 102 yards on the afternoon and a critical touchdown.

But as powerful as Lehigh's offense was, it was the defense that held the Raiders scoreless through a large chunk of the second half.   The Mountain Hawks held the Raiders' powerful running attack to 252 total yards, and only gave up a late touchdown to make the score look closer than the game really was.

Check in later for the full LFN recap.