Awesome Ridiculousness In A Record-Setting Day At Yale Bowl

Suppose you put in a copy of NCAA Football '14 into your dusty Playstation 3.  You create a team, "Lehigh", and put in the entire Lehigh roster, and make them 99s across the board.

You pick a team to play against - say, Yale - and you pick a place to play, of course, the Yale Bowl.  You put it on the medium setting.

Would these stat lines seem out of place if you played that game on that system?


"The Mountain Hawks scored on five of their first six offensive possessions to take a 35-7 lead with 11:35 remaining in the first half," LehighSports.com's official recap helpfully told us to neatly summarize the early flow of the game.

By necessity, it omits some key elements, like the defense forcing a 3-and-out on Yale's first possession and Mayes' first big play of the game, a 21 yard strike to senior WR Derek Knott (5 catches, 36 yards) and Lehigh's first touchdown, a 3 yard surge by sophomore RB Dominick Bragalone (56 rushing yards, 2 TDs) to make it 7-0.

Then a big combined sack up the middle on 3rd and 9 on the ensuing drive by sophomore DE Julian Lynn and senior LB Evan Harvey forced another punt, leading to a spectacular touchdown strike from Mayes to Pelletier.  Troy would streak across the middle of the field, and then, seeing a wide-open field in front of him, would turn and accelerate in for the score.

Did Yale head coach Tony Reno know that Mayes would be starting?

"I didn't know what the situation was," he said.  "We knew both guys were really good players.  We knew that the quarterbacks were good, we knew the perimeter guys were good."

Whatever the case, it took Mayes more time than you might have thought to get into the video game rhythm of the offense. 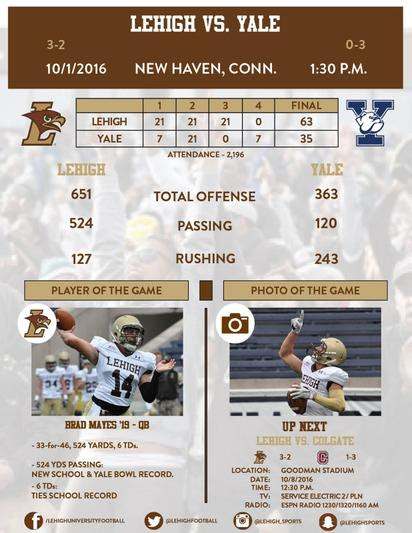 "Things got in sync as the game went along, not only with Troy but with pretty much all the wideouts," Mayes said after the game.  "There was a lot of space out there, and [offensive coordinator] Drew Folmar kept doing a good job with calling plays that put us in good position, and the wideouts did a good job in getting open and catching the ball."

After a fantastic 70 yard run by Yale RB Deshawn Salter closed the gap, Lehigh would responf four offensive plays later , as Mayes would find Casey on the outside, and then had one tackler bounce off of him and he surged to get to the end zone, a 54 yard score to make it 21-7.

It would get even more awesomely ridiculous after senior CB Brandon Leaks nabbed a ball thrown behind the receiver to set up shop for Lehigh's offense at Yale's 17, ending a drive with a 1 yard run touchdown by sophomore RB Micco Brisker (50 yards rushing, 1 TD) to make it 28-7.

"When the defense gets a turnover, that really amps us up and gets us going," Mayes said.

After a big sack on 4th and 3 by senior LB Evan Kauffman to get the ball back, Mayes zinged it to Pelletier on the next two plays, the second one a 27 yard touchdown throw that had Pelletier almost shaking his head in the end zone afterwards, seemingly not being able to believe it himself that the Mountain Hawks were up 35-7 only a little bit into the second quarter.

"They gave us a lot of looks that we liked, a lot of holes that we had to get advantage of," Pelletier said afterwards.  "Offense is clicking right now.  We've got a lot of weapons, and if they start double-teaming, we're going to start taking advantage of that."

A 63 yard touchdown pass to WR Christopher Williams-Lopez, and a punt return touchdown by RS Jason Allessi made it a game in a hurry, and a short field after a shanked punt and drive finished by a beautiful read option by QB Tre Moore made it a one-score game with 4:48 left in the half.

"We were sloppy at times," coach Coen said.  "We had opportunities to take advantage of, and like the Villanova game we weren't able to do it.  They didn't allow us to get our run game going.  We need to shore up some things."

But a 38 yard pass to junior TE Drew Paulsen (3 catches, 53 yards) would set up a critical touchdown by the end of the half, Bragalone's second touchdown of the day, to go up by two scores, and the Bulldogs would get no closer the rest of the way.

"Coming in we remembered what happened last time we were in the Yale Bowl," coach Coen said. "Our team was very excited to get back here and compete against Yale... we changed quite a bit of how we operated our offense and were able to find a lot of wide open wide receivers. I'm really happy for our team and our players and how they stuck together."

In the second half, Lehigh would keep the pedal to the metal, scoring Gatlin Casey's second touchdown right out of the gate and outlasting Yale 21-7 in scoring in the second half, including a back-breaker by senior WR Trevor Soccaras (5 catches, 39 yards, 1 TD).  A big interception by senior LB Evan Harvey (6 tackles 1 1/2 tackles for loss) seemed to really take the wind out of their sails, and Lehigh nearly got to a 70 point day before Yale stopped senior RB Kenny Crawford on 4th and 3, close to another score.