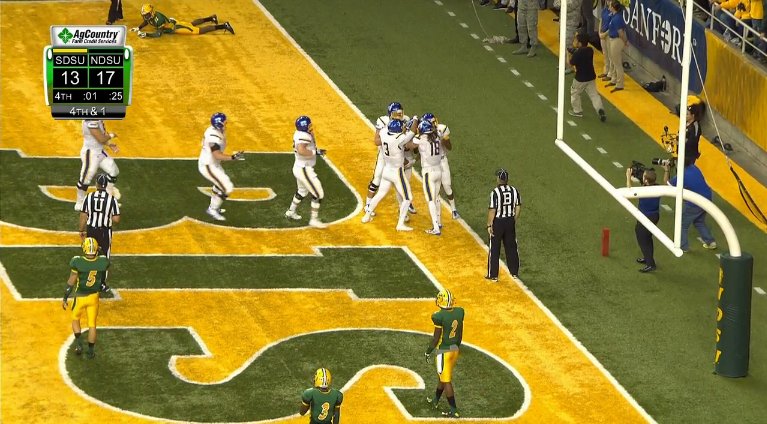 So this is the week that North Dakota State falls.

They fell in a thrilling defensive battle at home to South Dakota State in the game for the "Dakota Marker".

It was a great game, filled with drama and showed that the Jackrabbits are worthy of everyone's attention this week. In fact, South Dakota State's effective, time-consuming drive was in many ways pulling from North Dakota State's own trademark last-second comebacks, pulling together a drive for the ages, daring them to stop them yet consistently converting 3rd and 4th downs to set up the chance to win.

Here's what I ended up with:

* So now, why South Dakota State at No. 11 in my poll, and North Dakota State at No. 7?  The answer on my side is one of "body of work" - even with the loss to South Dakota State, the Bison's overall body of work drops them six places (which is more spots than many polls had them drop, frankly).  Similarly, on the South Dakota State side their win brought them up from my (admittedly somewhat underrated) position in my poll up to No. 11 - a step behind Montana and Charleston Southern.
* While we're on the subject of the Missouri Valley, finally I need to give some props to Youngstown State for winning the sort of "show-me" game that had them advance into my Top 20 - oddly enough in a similar, nail-biting fashion as the Jackrabbits.

* Each week is sort-of a tough time for me to figure out which Missouri Valley teams to put in my Top 25.  I really hate putting more than four teams from any conference in my Top 25 if I can help it - if there's a fifth team, the resume has to really "wow" me and most likely no more than one "oopsie" game.  2-4 Northern Iowa has a great win (Iowa State), and way too many losses (granted, they are to Eastern Washington, Montana, and Youngstown, but the South Dakota loss really stands out).  They'll need to run the table to get back in, probably, for me.
* Eastern Washington, my new No. 1, squeaked it out over Sam Houston State for me in large part due to their win over Washington State to start the year.  Though undefeated, the Bearkats have played a feather-light schedule (Oklahoma Panhandle State, anyone?) and doesn't do much to challenge themselves this weekend either when they host Texas Southern of the SWAC.  But it's worth mentioning that compared to, say, Northern Iowa's schedule, both teame have lighter schedules.
* Finally, I had a blasted time picking the No. 25 team in my poll.  Normally I like to pick an Ivy team for this spot, but Harvard's awful loss to Holy Cross (where they started their backup QB, backup RB, and backup WR1), and Princeton's feather-light schedule... I just couldn't do it.  The NEC also didn't seem to have any teams worthy of the mantle... so I finally decided on a team that most have already anointed in their Top 25s, North Dakota.
* My biggest beef with the Fightin' Hawks was their loss to Stony Brook to start the year, and then a series of Big Sky wins that didn't impress me.  But as the season has rolled on, North Dakota is on a five game winning streak with wins over some pretty good Big Sky teams in Cal Poly and Southern Utah.  Maybe I'm a late adopter, but I think they were much more worthy than any of the Ivy, SWAC or NEC teams I was looking at.