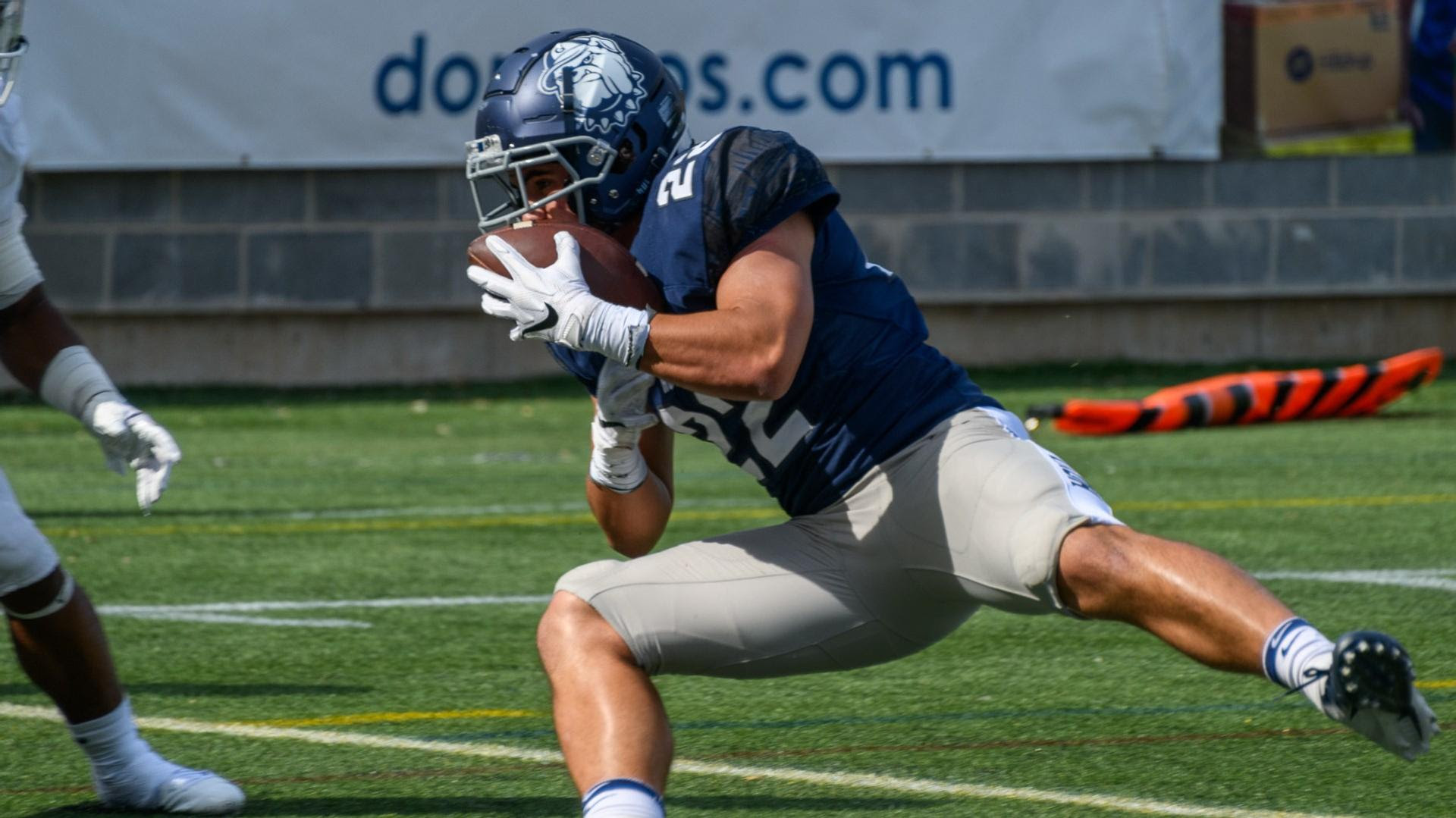 You can read College Sports Journal's preview of the game here, and my mostly-football-free "Tailgate Report" here.

I forgot in my "Tailgate Report" to do a look at Lehigh's game notes, so I'll do it here.

To most fans, seeing QB Addison Shoup on top of the depth chart at quarterback was probably the biggest eye-opener as QB Tyler Monaco was the starter last week, and was in the game until the last couple of plays in overtime.

As of the time of this writing, although some people have assured that Monaco is well enough to go, the truth is he didn't practice the entirety of this week, so I would more characterize more as a "gametime decision" as to whether it is Monaco or Shoup under center.  It seems fair to say that Monaco will start and play if he's able.

CB Marquis Wilson has struggled to get back to 100% from his injuries at corner, so freshman CB Brandon Spencer will be re-inserted into the starting lineup this week.

The final change to the roster is that freshman RB Zaythan Hill, who has really stepped up in Lehigh's last two conference victories, is now listed atop the depth chart at running back.  That's not to say we won't see RB Rashawn Allen or RB Nate Hope II - we'll be very likely to see them in a rotation of backs.

Georgetown head coach Rob Sgarlata knew he had a problem getting consistent offense two years ago.  That's why he went out and hired veteran offensive coach Rob Spence, who has been coaching offense at many FCS and high-end FBS programs (like Clemson) for the last 25 years.

Spence used to be known as a "run and shoot" guy, but the truth is he, like many college football offensive coaches nowadays, brought a version of the spread option to Georgetown.  Considering where the Hoya offense was two years ago, Spence has brought a great amount of improvement to Georgetown's offense, though if you remove a 69-0 win over D-III Catholic, the Hoyas are averaging about 24 points a game.

Senior QB Gunther Johnson, originally was a transfer from the University of Arizona, and he is a solid game manager for the Hoya offense.  Johnson's real forte, aside from being a true dual threat (276 yards rushing, 5 rushing TDs), is that he keeps mistakes to a minimum (passer rating of 128.0, 1 interception on the season).  That has been huge for this team, as their defense has forced so many turnovers, all the offense has needed to do is to hold onto the ball and not make any crazy mistakes.  The Hoyas clearly pride themselves in not killing their chances through turnovers, and almost always they achieve that goal.

Last year RB Jackson Saffold was one of Georgetown's lead rushers, but this season sophomore RB Herman Moultrie II has emerged as the Hoyas' lead ground gainer (379 yards, 7 TDs).  Both are on the depth chart and both should get carries in the spread option.

Johnson has focused mainly on his three starting wideouts in the passing game: senior WR Michael Dereus, sophomore WR Joshua Thomas, and sophomore WR Cameron Crayton.  Together they have combined for over 1,000 yards receiving of Georgetown's 1,354 on the season, along with 7 TDs.  No other RB, TE or secondary wideout has more than 100 yards receiving on the year.

By any measure, Georgetown's offensive line looks much better this year than in years past, only yielding 15 sacks in 7 games after being very leaky last season.  6'5, 320 lb senior OL Ryan Jelenik is a big part of that on Johnson's blind side.

For the second year in a row Georgetown is playing a base 3-3-5 defense.  To make this defense work, you need a stellar, athletic front six that fills running lanes well and does a stupendous job of tackling.  This is exactly what the Hoyas have.

6'0, 295 lb senior DE Khristian Tate is simply one of the class defensive linemen in the Patriot League in a year where there are a lot of great defensive linemen.  He needs to be accounted for at all times, which opens up for his other front six teammates to get big plays, like LB Xavier Reddick (47 tackles, 5 tackles for loss), LB Justin Fonteneaux (46 tackles, 2 interceptions, 1 fumble recovery), and DT Duval Paul (16 tackles, 3 1/2 tackles for loss).  They have consistently posed problems to all the offenses they have faced - they've only given up more than 20 points twice this season.

The great pressure of Georgetown's front six has also resulted in the Hoya secondary get an eye-popping 11 interceptions on the year so far, while no single player has more than two.  Senior S Cameron Agee is joined by a secondary full of junior ballhawks and a team that ranks No. 4 in total passing yards allowed.  Portorreal, Bibbens and Snyder might have a rough time getting behind this group - just a tremendous defense front to back.

Senior P/K Brad Hurst doesn't get the same headlines in the punting game as Bucknell P Alex Pechin, but quietly he's had a terrific year punting the ball, averaging more than 42 yards per punt and 6 going 50 yards or more.  He hasn't had a lot of chances to boot field goals this year, but he does have a 44 yarder to his credit this season.

Like last year, speedy WR Joshua Tomas has been a pretty big weapon on kick returns, returning one punt 66 yards for a touchdown already this season.  He's also their primary kickoff return man with 9 returns for 175 yards.

1. Putting Gunther Under.  How to get at Gunther Johnson and not have him pick Lehigh's secondary apart or take off for big gains is the key challenge for this defense this week.  Lehigh's front seven has been pouring on the sacks, getting more than five per game the past two weeks; Georgetown only averages two sacks yielded per game.  If Lehigh's Sack Exchange can get at Gunther Johnson and sack him on the turf more than twice, I like Lehigh's chances.

2. Smart, high-percentage plays.  The offense doesn't really need to take mad bomber shots down the field - they can get higher-percentage plays getting yards in smaller chunks.  Getting first downs, moving the sticks, and getting time-of-possession should help wear down Georgetown's formidable front six, where good things can then happen.

3. Keeping up momentum.  Twice, Lehigh has won games on the final play in Patriot League games.  It's a fun way to win, for sure, but it's not something that's sustainable week to week.  The Mountain Hawks are a fun, exciting team to watch, that has already improved by leaps and bounds over Week 1.  But they still need to find a way to get to the fourth quarter and not be on edge that the dam could break at any moment.  That means playing with more consistency, and getting better this week, too.  Despite the record, this team definitely has a long way to go.

Going into the season, Lehigh fans didn't necessarily look at the schedule and immediately conclude that they would be 2-0 in the Patriot League and in position for a possible Patriot League title.  In the preseason, the Mountain Hawks were picked fifth.  Two of the teams they beat to this point, Colgate and Fordham, were ranked above them.  So was Georgetown.

In some ways, this Lehigh team feels like a work-in-progress.  They are not winning games in a prototypical Lehigh way, but they are gutting out wins with defensive stops, and last week through clutch offense as well.  The emergence of WR Dev Bibbens, I bet, has defensive coordinators around the league worried.

But I still have that nagging question - are they really here yet?  Can this offense keep the turnovers down against statistically the best defense in the Patriot League?  Can RB Zaythan Hill get another big play touchdown run to help steal a victory?  I don't know the answer yet.  I know this team has a lot of "grit", as head coach Tom Gilmore is fond of saying.  And I'm eager to see how the rest of this season, with this "gritty" group, turns out.  But I worry if this comes down to late in the 4th quarter, again, for the third straight week, if the Mountain Hawks will make it happen.

Anonymous said…
Wow what an exciting win! So glad Monaco was healthy and could start as I think we would have been in trouble with Shoup in there (small with weaker arm so they would have keyed on the run). TM with some key throws and big plays by the receiving team along with timely runs. These tight games are tough, let’s come out firing against HC and take it to them early!
9:01 PM