2018 Week 3, Navy: Weather Report and Getting Your Tailgate Ready (Including Burger and Drink of the Week)

Like me, you probably heard that Hurricane Florence was barreling down on the North Carolina coastline, and earlier in the week it looked like a historic rain event could have possibly caused Lehigh's first meeting against an FBS opponent in 15 years to be delayed, or even cancelled.

Meetings were had, and the situation monitored, but over the last 24 hours it looks like, at least for Annapolis and the Maryland area, it will be spared the worst of the storm.

According to the Capital-Gazette, "if the latest forecast holds Hurricane Florence won’t present any problems for Anne Arundel County, but officials warn residents should remain vigilant for any changes in the storm’s track."

The shorter version, for Lehigh fans, anyway: Game.   On.

Getting to Navy-Marine Corps Memorial Stadium

Pick up 95 South and take it all the way down to Baltimore.  Take the 895 South exit and look for the exit for 97 South towards Annapolis. Take I-97 South to US 50 East. Exit US 50 at Rowe Blvd. (exit #24) and bear to the right. Navy-Marine Corps Memorial Stadium is on your right. Right turn on Farragut Rd. gives access to Gates 1 and 2. Right turn on Taylor (second right) give access to Gates 5, 6 and 7.

If you are making the trip to the stadium this weekend, you might want to take extra care to study the parking situation.

If you are going with friends who have a parking pass in the Blue and Gold lots - these are reserved for season parking pass holders - don't hesitate, just do it!.  Some of the parking passes for this are do go on sale at the ticket office - but get there real early if you hope to get those.

Alternatively there are other places to park for the game, but be prepared to pay.  $30 for Germantown Elementary School parking (which opens early, like 10AM), and $60 if you are planning to do the RV thing.  Other options are Bladen Street Garage (intersection of Bladen Street and Calvert Street); Gotts Court Parking Garage (250 Northwest Avenue); Park Place Garage (intersection of West Street and Taylor Avenue); and Whitmore Parking Garage (37 Clay Street).

There is also a satellite parking area at the Harry S. Truman Park and Ride that runs shuttles every 20 minutes to and from the ticket window at Navy-Memorial Stadium.  Two notes, if you choose this cheaper option: you can't tailgate in the Park-and-ride lot, and it's a fair distance to and from the stadium.  Again, and this is the theme here, you want to get there early.

Unfortunately most of the special stuff planned for this week from the Alumni Association, including and Alumni tailgate and the Friday Happy Hour, was cancelled due to the threat of possible terrible weather (and the fact that Lehigh fans form big swaths of Virginia and points south are very much concerned about the track of the storm). 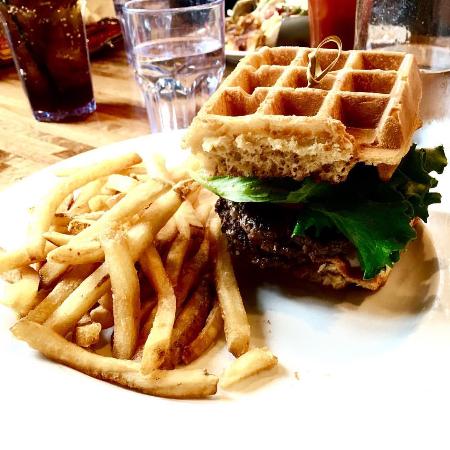 Inspired by the Iron Rooster in Annapolis is the somewhat-self-explanatory Waffle Burger that might make you temporarily forget that chicken and waffles is a thing.

Seriously, if you HAVE to get to the tailgate area early and start firing up the grill early, this is a true Breakfast of Champions.  Just make a double batch of buttermilk waffles the night before and store them free of moisture as you pack them for your tailgate.

Grill the burger patty and some bacon. Add some cheese, toast up the waffles, and apply some mayo (preferably homemade) to really smooth it out.  Assemble and add a sliced tomato and a slab of lettuce.


LFN's Drink of the Week

There was a 100% chance I went with a nautical-themed drink for my "Drink of the Week" this week.  No, really.  There was no chance I wasn't taking this wide-open shot.  As a result, my wide-open shot is, of course, the Anchors Away.

The linked recipe calls for blood orange juice, but let's not go nuts - regular old Tropicana will do quite nicely.  Fill a shaker with ice and pour in gin, vermouth, Cointreau and the Tropican. Shake well and strain into an ice filled glass. Top up with soda water, or if there is residual rain from Florence coming down on your tailgate, you're good to go.