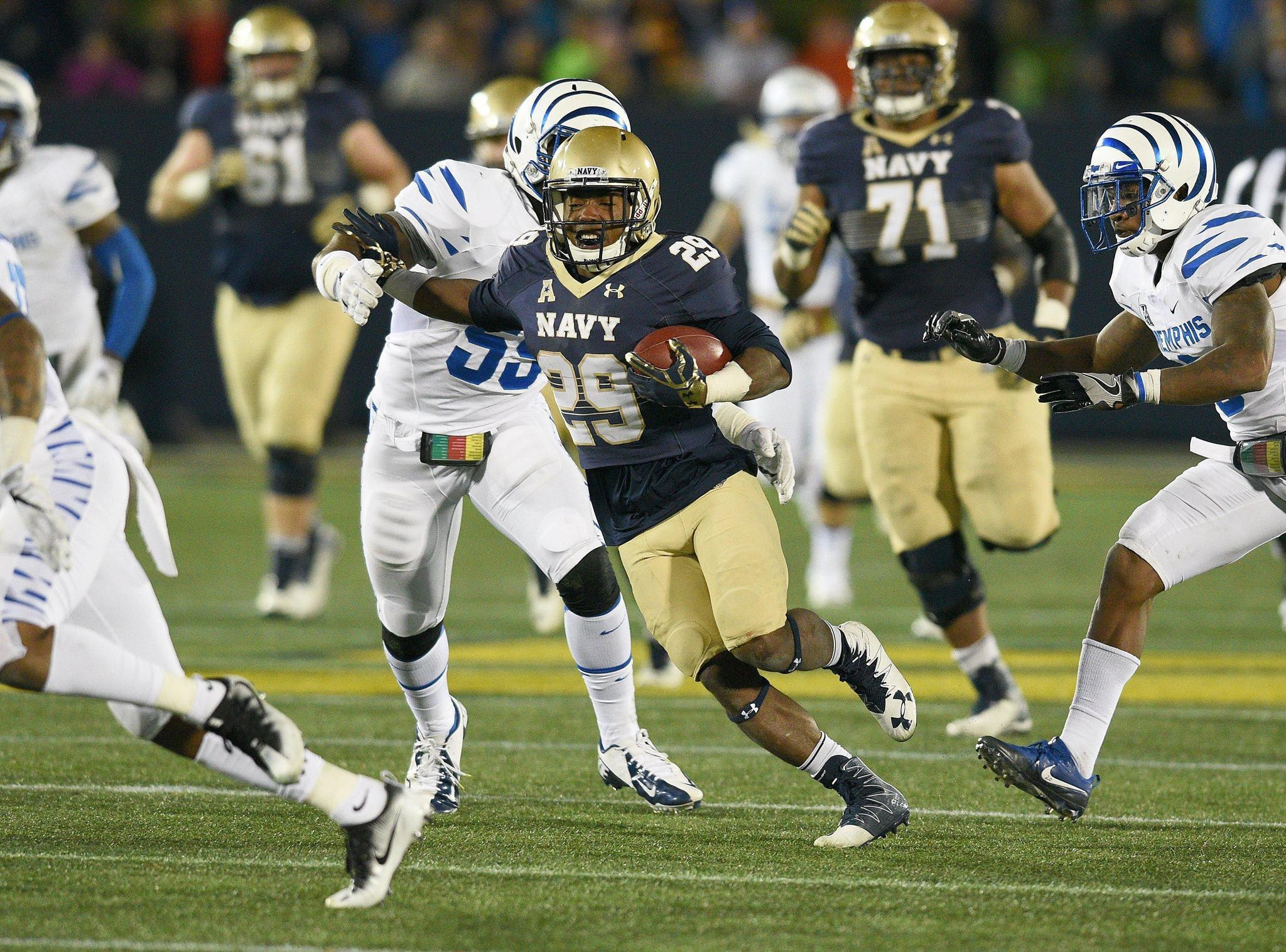 It's time to go full nerd and do a full-blown breakdown of the Navy Midshipmen.

I can't tell you how many of these previews I've done where I get game notes late Friday evening, had to play games with Ivy League depth charts to try to divine game plans, and the like.

Some schools Lehigh plays don't have any local media anymore, so finding out more about the starting players and the like is extremely difficult.

Not so this week.  For the first time in 15 years, Lehigh plays an FBS team, but not just a regional school, say, from the Midwest - they play Navy, a school with national and international reach.

Game notes were out early and were detailed.

The coverage of Navy football isn't just from the local Capital-Gazette - which continues, through tragedy, to be stellar - but from national media, too.  In fact their last two games - against Hawai'i and Memphis - were big-time affairs in the national world of college football.

There is no shortage of media about Navy football or Navy football players.  In that way specifically, it's like a breath of fresh air.

The last-minute injury information I've been able to find out on Lehigh is that senior RB Dominick Bragalone will not play this weekend.  Freshman RB Rashawn Allen and sophomore RB Evan Chadbourn will be doing most of the heavy lifting on the ground this week in Annapolis.

OL Jackson Evans last I heard was still questionable (50/50) for this weekend's game.  If he is OK to go that will be a big help at center, where he was the projected starter before he went down before the home opener.

Navy's offense for decades and decades has been no secret.  You know in a broad sense what you're going to get - you're going to get a triple-option attack with things like slotbacks, an actual running fullback, and, just when you've finally think you've figured out where the running misdirections are coming from, the quarterback burns you with a pass play.

That doesn't make Navy's offense any easier to prepare for.  Navy's flavor of the triple-option, with their array of elite student-athletes, is extremely tricky to handle and even trickier to prepare for.  It requires unique preparation - Lehigh doesn't exactly have a lot of slotbacks or rushing fullbacks to simulate the offense - and it has to be done after a more conventional week of preparation. 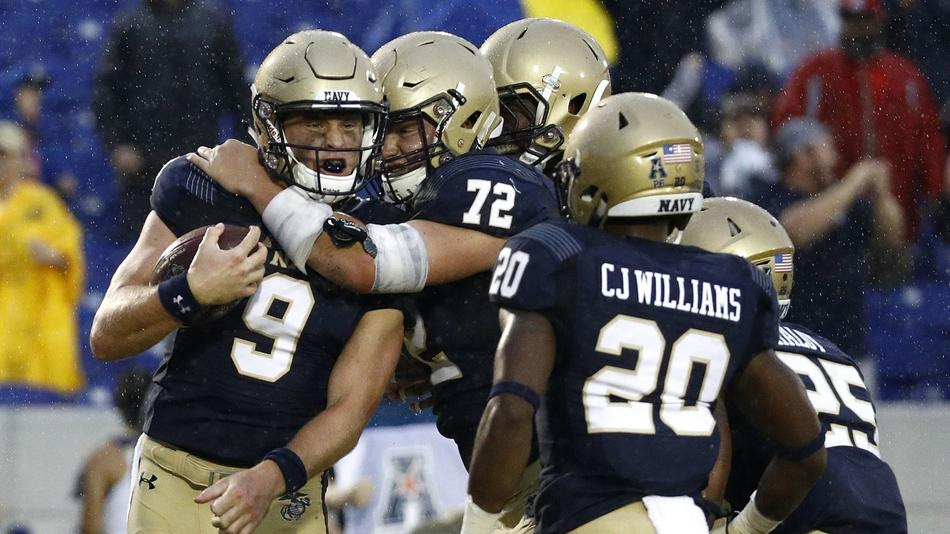 The biggest news of the offseason for Navy was the fact that last year's QB Zach Abey was being moved to WR and QB Malcolm Perry was anointed the starter by head coach Ken Niumatalolo.  You have to be careful, though because Abey is considered somewhat of a "slash" player who can do a little of everything - including playing QB in the red zone.

Here's the sort of threat Abey can be - last week against Memphis, in a critical spot, Navy called a double-reverse ending up in the hands of Abey - who lofted the ball to a wide-open Perry for 17 yards, resulting in Navy's first touchdown.

“I’m really proud of Zach. He did exactly what we have planned for him to do all season,” offensive coordinator Ivin Jasper told The Caiptal-Gazette this week. “Zach has a very, very important role on this football team – to convert on third downs and also on the goal line, and he’s done exactly that.”

“Zach was absolutely phenomenal. It’s amazing to me this guy can go play wide-out then come in there (at quarterback) in crunch situations and produce,” Niumatalolo said. “Everybody knows what’s going to happen. It doesn’t take a rocket scientist to figure out what we’re going to do. He just finds a way to get first downs and touchdowns.”

With all the focus on what Abey can do, the real driver of the offense is Perry, who has rushed for 310 of Navy's 642 rushing yards on the season.  He's only passed the ball 6 times, completing 3 passes for 41 yards.  His longest completion was 19 yards. Senior QB Garret Lewis also has made some appearances at QB as well - he sometimes comes in in certain situations where passing is more of a necessity.

As for the rushing game, there isn't one dominant go-to back that Navy uses, just a stable of backs that, as you might guess, are great athletes.  Eight different Midshipmen not named Perry, Abey or Lewis have carried the football, though FB Anthony Gargiulo (21 rushes, 70 yards), FB Nelson Smith (12 rushes, 87 yards) or SB Keoni Kordell-Makekau (19 yards) have technically seen the most action.

In the version of the triple-option that Navy runs, WRs are mostly valued for their blocking ability, but of course occasionally need to be called upon to catch passes.  WR Taylor Jackson has the most receptions on the team - 4 catches for 51 yards.

You would think that, as an FBS team, the Midshipmen would have the heaviest offensive line Lehigh has faced, but you'd be dead wrong, though that doesn't mean Navy's offensive line is in any way poor.  RT Andrew Wood, who is 6'4 and 290 lbs, is seen as a potential all-AAC candidate on the offensive line and will be a challenge to try to out-physical in the trench.

Navy plays a base 3-4 defense that was one of the reasons why the Midshipmen were able to upset Memphis last week.  It is here where Lehigh's biggest challenge might lie - making hay against the front seven of the Misdhipmen.

Start with a big, physical 3-man line anchored by 309 lb NG Jackson Pittman.  Pittman doesn't always get on the stat sheet but make no mistake, he's a big reason why, in two games, opponents are only averaging 159 yards rushing against them.  Runs up the middle will be a challenge with him.

Then there's senior LB Taylor Heflin (2 tackles for loss) and S Sean Williams (14 tackles) which add additional support in the run game for Navy, while LB Hudson Sullivan (12 tackles, 1 fumble recovery) is another ball-hawk that has caused opposing offenses problems.

Where Navy has had issues in defense (granted, one of the games came against one of the best offenses in the early going, Hawai'i) has been the passing game.  It is tempting to try to attack Navy's defense through the air, testing CB Micah Farrar and CB Jarid Ryan.

Senior PK Bennett Moehring was somewhat of a hero last week, his 23 yard FG the margin of victory against Memphis.  He's 6/6 on extra points as well, while P Owen White has averaged just a hair below 40 yards per punt.

Coach Niumatalolo has been concerned about Navy's special teams in general, especially because kick returners Jacob Springer and C.J. Williams have been fairly ineffective so far in their two games against Hawai'i and Memphis.  You can be certain that they will be looking for some much bigger special teams play this week.

1. Pass-happy Mayes?  It's truly tempting - why not just have senior QB Brad Mayes take his first ten plays, and throw the ball every down?  Short passes, long passes, medium-range-passes - just simply do what Navy does, just using misdirection but using passing as the driver rather than the running game.  More seriously, Lehigh won't be able to pass the ball 90 times this week, but certainly a robust passing game - and getting Mayes in rhythm - would have to be key to any possible upset.

2.  Special Special Teams.  One big special teams play - one way or another - could have a big impact in this game.  So far, Lehigh's special teams against St. Francis (PA) and Villanova have delivered some big plays, but they will need to be much more consistent to have the same sort of results against Navy.  Any upset will have to come from something like that.

3. Takeaways.  Navy's triple-option sometimes can hurt itself, with inopportune fumbles that can be exploited for points.  Senior DL Julian Lynn, senior LB Mark Walker and others need to have an eagle eye out for loose footballs and get some key takeaways.  That, too, is a key to an upset.

This game almost feels more like an event than an actual game, though I'm sure the Lehigh players will be putting all of that away once the Mountain Hawks line up to kick or receive the kickoff.  It is a big event, and will be a tremendous opportunity, to a national TV audience, to show what they, and Lehigh, is about.

In that vein I think Lehigh might surprise some people and keep the game close all the way through the first half.  If they get some breaks, make few mistakes and don't wear out at the end, they could pull off the upset.  But I'm not greedy.  A well-fought game, well into doubt in the second half, would have me grinning ear to ear as well.

Anonymous said…
Hey Anonymous above....you ever play? Or are you just a troll looking for attention?
11:21 PM