QUICK RECAP: Lehigh Has Another Losing Trip To NYC, Falls to Fordham 45-35 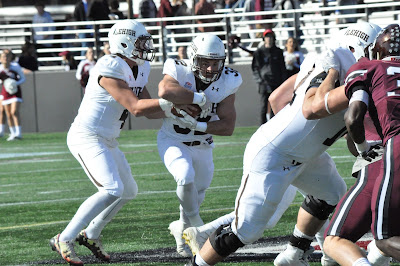 The ambulance came onto the field for the third time during a Lehigh football game.

On this occasion, it was that senior TE Drew Paulsen was trying to recover an onsides kick for the Mountain Hawks.  Down only a field goal, head coach Andy Coen was trying to get the ball back to take advantage of momentum.

On the tackle, he had a head or neck injury, necessitating for the third time this year that an ambulance had to come on to the field for a Lehigh game.

The extremely-loved senior out of Tampa, Florida was carted out on a gurney, and headed to local Presybterian hospital for observation.  On the TV broadcast, they showed tears from some of the players on the sidelines.

Lehigh lost to Fordham, 45-35, in an extremely frustrating game where the Mountain Hawks turned over the ball  four times, twice in the red zone, and twice setting up Fordham in their red zone.  But the injury to Paulsen, and the right leg injury that came up earlier to senior DT Jimmy Mitchell, was the focus after the game.  The worries were clearly centered around the two seniors' well-being.

"It's unbelievable," Coen said, Paulsen's injury clearly very much on his mind.  "I've been doing this for thirty-something years, and I've had three of these in one season."


"We didn't perform very well," Andy added shortly thereafter.  "We had a great opportunity out there.  We didn't perform the way we are capable of offensively.  We had a hard time getting the ball to Troy, and when you turn over the ball four times, you're not going to beat anybody when you do that."

But on the next series, both Portorreal and senior WR Gatlin Casey would be injured and wouldn't return, and though sophomore WR Dev Bibbens (2 catches, 25 yards, 1 TD) and junior WR Connor Bianchini (4 catches, 44 yards) would come in and have decent days, the loss of two great Lehigh playmakers to injury was tough to swallow.

Those injuries had an impact, but the silver lining is that it allowed junior RB Dom Bragalone to shine.

Lehigh would never get a lead in this game, though they would rally to tie the game at three different occasions, at 7-7, 14-14, and 21-21, thanks to the prowess of Bragalone, who scored two of those touchdowns, one through the air on a 13 yard pass, and another on a 30 yard run.

"I mean, yeah, I don't care too much about my personal [stats]," Dom said after this game where he ran for a career-high 218 yards and caught 6 passes for 79 yards.  "I would have rather came out with a win.  We played with them throughout the whole game."

In a way it harkened back to the last time Lehigh came to the Bronx in 2015, when QB Nick Shafnisky went out due to injury and a freshman QB named Brad Mayes had to try to pick up an injured team to get a key victory, but came up just short.

But this game belonged to missed opportunities for Lehigh, the most critical sequence coming with the score tied at 21.

On a 2nd and 8 from the Fordham 36, Fordham RB D'Angelo Palladino got free of contain and rumbled for a 58 yard run, only prevented from being a touchdown by junior DB Kareem Montgomery's tackle.  However one play later, Anderson would find TE Isaiah Seabright to give Fordham a lead they would never relinquish.

On the ensuing offensive drive, Mayes threw an interception that was promptly converted into a field goal, making the score 31-21.  Though Lehigh would rally to make it 31-28 and 38-35 - thanks to a powerful run by senior RB Nana Amankwah-Ayeh and a spectacular catch by WR Dev Bibbens - it wouldn't be enough in the end.

"I really think Bibbens played really well," Andy noted.  "He's getting better and better, and also had a pass break-up on a possible interception.  I think we're really going to need him down the stretch."

With three minutes to go, Paulsen's injury took the air out of the stadium, and Lehigh needing a stop to continue the game.  They wouldn't get it, as Palladino, who ran for 297 yards and 3 TDs, got his final, definitive score with 2:24 to play.

Lehigh technically controls their own destiny for the playoffs - if they win the rest of their games, they're in.  But yet again, 2-6 Lehigh will have to pick up the pieces after a loss and try to find a way to win again next week.

"Now it's do or die for the rest of the year," Bragalone said.

On the other hand, there is something seriously wrong with Andy Coen and his assessment of his own defense. Another 540+ yards given up, coming off a bye week, with a backup RB.

Dominick Bragalone ia a true monster, a warrior, an amazing player.
What a performance.
12:28 AM