In 41-38 Win Over Colgate, Lehigh Buries Memory Of Winless 1966 Season, And Gives Themselves Potential For More This Season

It was a very different time for Lehigh football, but in 1966, the Engineers started out the season 0-5, and had to travel up to Hamilton, New York to take on the Colgate Red Raiders.

"Lehigh faces its toughest opponent of the season tomorrow afternoon in the Red Raiders of Colgate, at Kerr Memorial Stadium in Hamilton, N.Y," the 1966 Brown and White preview read.

It was that sort of historic elephant that the 2017 Mountain Hawks had on their backs this Saturday, whether they realized it or not.

Had they lost to their Chenango Valley rival, they would have been the first Lehigh football team to go 0-6 in more than fifty years.

0-5 entering this game, ironically their sixth shot at a football victory would involve going to the same venue to play the same opponent they played fifty-one years ago trying to avoid a 0-6 start.

Turning around an 0-5 start could be one of the hardest jobs in football, especially against a hated conference rival, and especially in a place that has always been a difficult place for Lehigh to play.

And it wasn't easy.  The 2017 Mountain Hawks had help, both from some tough calls against Colgate and from some boneheaded penalties against the Raiders that were justified.

But this group of athletes achieved that goal that eluded the same goal of the Lehigh Engineers of 1966.  The football team playing this Saturday won a hard-fought 41-38 contest that maybe, just maybe, might have turned things around just in time. 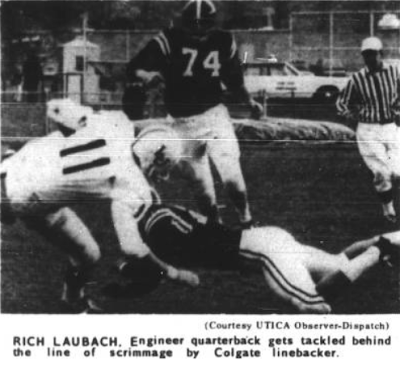 "The Engineers played their best game of the year against a heavily favored Colgate team," poor Brown and White sports reporter Dick Funk wrote in 1966, "but their bid for victory fell one touchdown short and Lehigh dropped its sixth straight game, 21-15, Saturday."

1966 was a season where QB Rich Laubach and WR Rich Miller would be a prolific passing tandem, mostly due to the fact that Lehigh had a very ineffective running game and Laubach to Miller would become the Engineers' most effective weapon.

The late 1960s were a very rough period for Lehigh football, a time when the Engineers were in the middle of a stretch between 1961 and 1971 where not a single Engineer team had a winning record.

As we fast forward to 2017 - fifty-one years later - we saw a very different Lehigh team travel to Hamilton to try to get a win.

These 2017 Mountain Hawks were a team that started in the FCS Top 25 and lost five straight games to start the year, each loss more painful and more interesting than the next.

In no way should they have resembled the Engineers of of the mid-1960s, or the last Lehigh football team that started 0-5, the 2014 team that got their first victory over Cornell in Week 6.

But that's where this Lehigh football team was, going up to Hamilton - trying to pull the season out of the headlong nosedive.  The 2017 football season was headed towards those same narratives, in the end achieving what the 1966 team could not.

When a team is stuck in a five-game losing streak, it sometimes seems like good things your team does are invalidated several plays or series later.  A great stop is cancelled out by an interception, or a thrilling touchdown is cancelled out by giving up a kickoff return for touchdown on the next series.

And every time Lehigh did something good, the worry was that the other shoe would drop.

But with about five minutes to go, none of that mattered, as a 27 yard field goal by Colgate PK Chris Puzzi to put the Raiders up 38-35 felt like it was going to be another one of those moments where Lehigh would fall just short.

But junior QB Brad Mayes had other plans.

“Before the drive, I told the defense I was going to get them a win,” Mayes told Keith Groller of The Morning Call. “That’s not being cocky, that’s just playing with confidence. Our defense did a great job today and I wanted it for them.”

There was no guarantee that Lehigh would be in a position at that point to possibly win the game, with Colgate dodging their own penalties and several other tough calls that turned the Raiders the other direction.

But Mayes and the offense put the rest of the game behind them, stayed where their feet were, and did their jobs to get the game-winning score on that drive.

On 3rd and 10, Mayes threw it to senior WR Gatlin Casey, who drew a pass interference call against the Raiders that moved the sticks and kept the drive alive.

Then Bragalone would get a 20 yard run that put Lehigh deep into Colgate territory.

Finally, Mayes would get time to fire a looping pass to senior WR Troy Pelletier, putting it in a place were only Troy could catch it.  He did, and his momentum carried him into the end zone - thus allowing Brad to keep his promise.

"Brad did great today," Andy Coen said afterwards.  "He covered the ball well and made really good decisions. So much different than the week before. I'm really proud of him. In the locker room he stepped up and became a vocal leader. The guys really accepted him for that and it's going to help us a lot moving forward. " 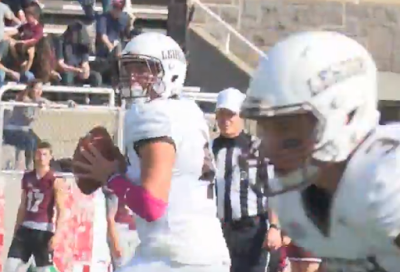 It was the kind of drive that 0-5 teams don't do - like the 1966 team whose Hail Mary pass to try to win the game fell short.  In a single drive, Mayes and the offense finally decided that they weren't going to sit around and be the team with the pass that falls incomplete.

The win wasn't all about that one drive - it was a team win, a win where Lehigh overcame their own mistakes and found a way to win a football game.

But it sure felt like somehow, some way, this team might have turned a corner and might win another football game and set up other future success for this season.

“It’s a big boost for our confidence,"  senior CB Quentin Jones said.  "But it’s just step one in our plan for the league.”

It is not easy to reverse course after five straight losses to start the year in a meaningful game.  But this team has done it for one game.  The challenge will be to continue it next week, but for the first time this season, excitement and hope has crept into the Lehigh football season.

And in doing so, maybe they also helped a team that took the field fifty-one years ago finally avenge a game on their schedule that they would have loved to play one more time.

Anonymous said…
thanks for keeping the faith Chuck, the breaks went our way finally. Dom is on absolute fire right now, what a load to contain.

Anonymous said…
Officials must be proud of dictating who claimed "victory" in this one. The 12th Man. Embarrassment to the Patriot League.
12:21 PM

Anonymous said…
Calm down Gate fans. It happens to all the PL teams...LU has faced its share of terrible officiating many times. LU was due this time, and was fortunate to win with a less than FCS level defense, as many of us have honestly pointed out. Its been an interesting season with a one sided football team to root for.