This week, Lafayette plays Harvard up in Cambridge, where the 2-4 Leopards are expected to lose to the 2-2 Crimson.  I say expected to lose because with one exception since 2000, that's what's happened every time Lafayette has played Harvard: they have lost 12 out of their last 13 to the Johnnies, and have a lifetime record of 3-19 against them.

The expectation among Patriot League football fans is that football scholarships were supposed to change all of that.  Simply offer conventional football scholarships, add to that a chance to play in the FCS Playoffs, and suddenly football recruits choosing between Harvard and Lehigh for business would start choosing Lehigh.

It hasn't worked out quite that way.

Through five games in 2017, the combined record of the Patriot League is a mind-boggling 8-21 outside of Patriot League contests.   And of those eight wins, only one has come against a team from the Ivy League - Colgate's 21-7 win over Cornell.  Collectively, the Patriot League is 1-7 against the Ancient Eight, with six of those seven losses coming by more than two touchdowns.

This is not what fans of the Patriot League signed up for five years ago when they decided to offer the same sort of scholarships that schools like Delaware, Montana and North Dakota State.  But is the problem scholarships, or is it something else?


Patriot League fans should feel blessed that Paul Reinhard is still on the Lafayette beat for The Morning Call.  The reason why is evident from the fact that he asked Harvard head coach Tim Murphy about the difference of recruiting against Patriot League schools since they can now give merit scholarships while the Ivies stick to their financial aid system.

“To be perfectly honest, I thought it would have a bigger impact than it has,” Murphy said. “There is some better skill in the league, certainly, but I don’t think the quality of the programs is that much different than it was five or 10 years ago. It’s really good football but not necessarily as impactful as I thought it might be. And I think a lot of kids on the Patriot League teams now would have been on the same teams if they didn’t have scholarships.”

A pretty stinging analysis from coach Murphy, and one that many Patriot League fans have been debating amongst themselves this year as to what the causes might be. 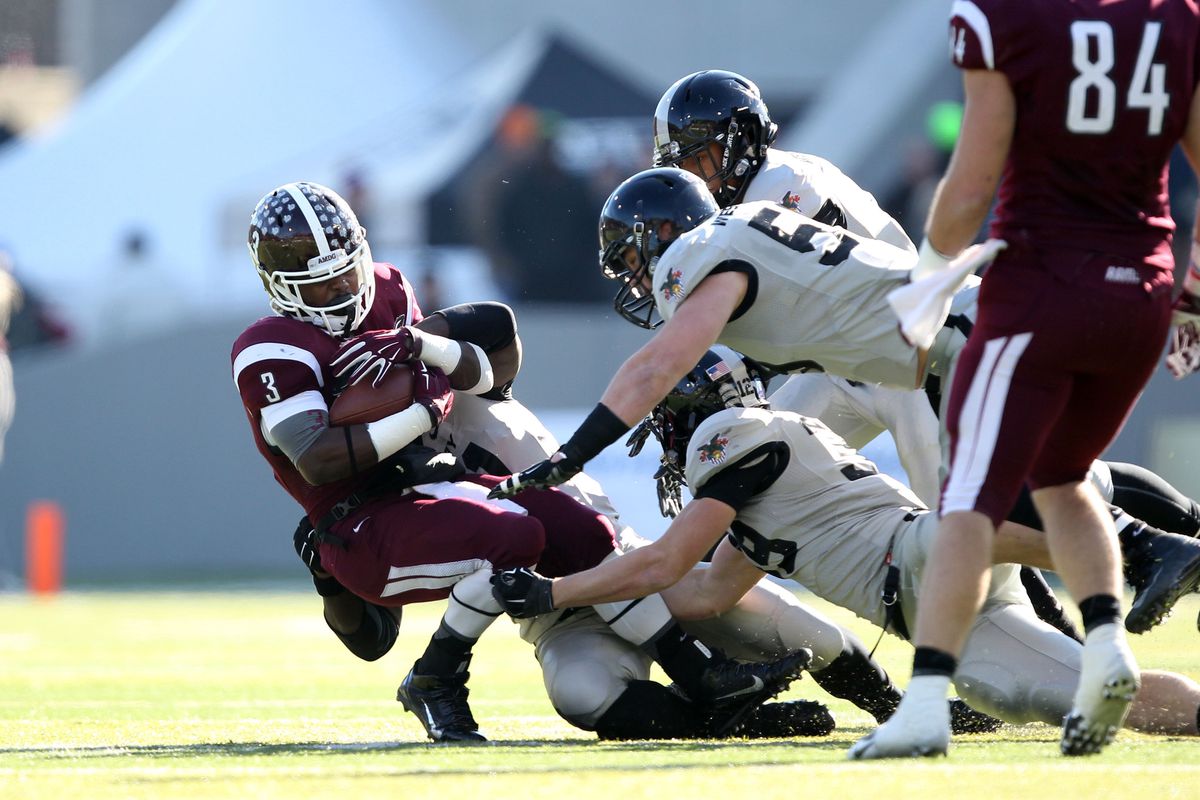 One factor for certain is the fact that the Patriot League as a whole has upped their scheduling game.  This year, three Patriot League teams scheduled FBS teams: Colgate (vs. Buffalo), Holy Cross (vs. UConn) and Fordham (vs. Army).  Though these were losses, they were somewhat expected.

The FCS teams that have shown up on Patriot League schedules haven't been slouches, either, including nationally-ranked Villanova (twice, vs. Lehigh and Lafayette), Richmond (vs. Colgate), and Eastern Washington (vs. Fordham).  New Hampshire (vs. Holy Cross), William & Mary (vs. Bucknell), Furman (vs. Colgate) and Monmouth (vs. Lehigh and Lafayette) are also tough teams that shown up on the schedule as well.

But when you schedule tough teams, you expect to win more than one of those games.  In the above games, the Patriot League has gone 1-7.

But is it due to scholarships?  Frankly, to me, blaming it on scholarships makes no sense.

All loosening the old needs-based restriction on football scholarships did was to enlarge the pool of possible football recruits available to Patriot League schools.  Reverting to the old method of means-testing scholarship aid - essentially, saying you only qualify for aid by going through the financial aid office, where you'll discover how much of your education is paid - would make it onerous to get the athletes Patriot League schools are already getting.  I am certain that scholarships have allowed Patriot League schools to recruit student-athletes they would not have otherwise been able to realistically recruit.

However, in parallel to the scholarship decision came a new restriction that, in my opinion, may be affecting the schools of the Patriot League much more.

"The Patriot League will begin using instant replay for basketball and reduce the size of football rosters in future seasons," the Patriot League Council of Presidents announced back in 2012.  "According to the league, football roster sizes will be reduced in the future. The maximum roster sizes will be set at 95 players in 2013, 92 in 2014 and 90 in 2016."

It seemed like a small move at the time, perhaps a cost-saving or competition measure to accommodate a football scholarship world.  But it doesn't seem like the League thought of the ramifications of that decision fully.

In the rest of FCS, football rosters are routinely much larger than 90 student-athletes.  I counted the total number of playable athletes of all of Lehigh's opponents this season:

Colgate, of course, is a Patriot League school, so they are required by conference rules to have a roster of no more than 90.  But as you can see, other FCS schools, including those of the Ivy League, do not choose to constrain their roster size in this way. 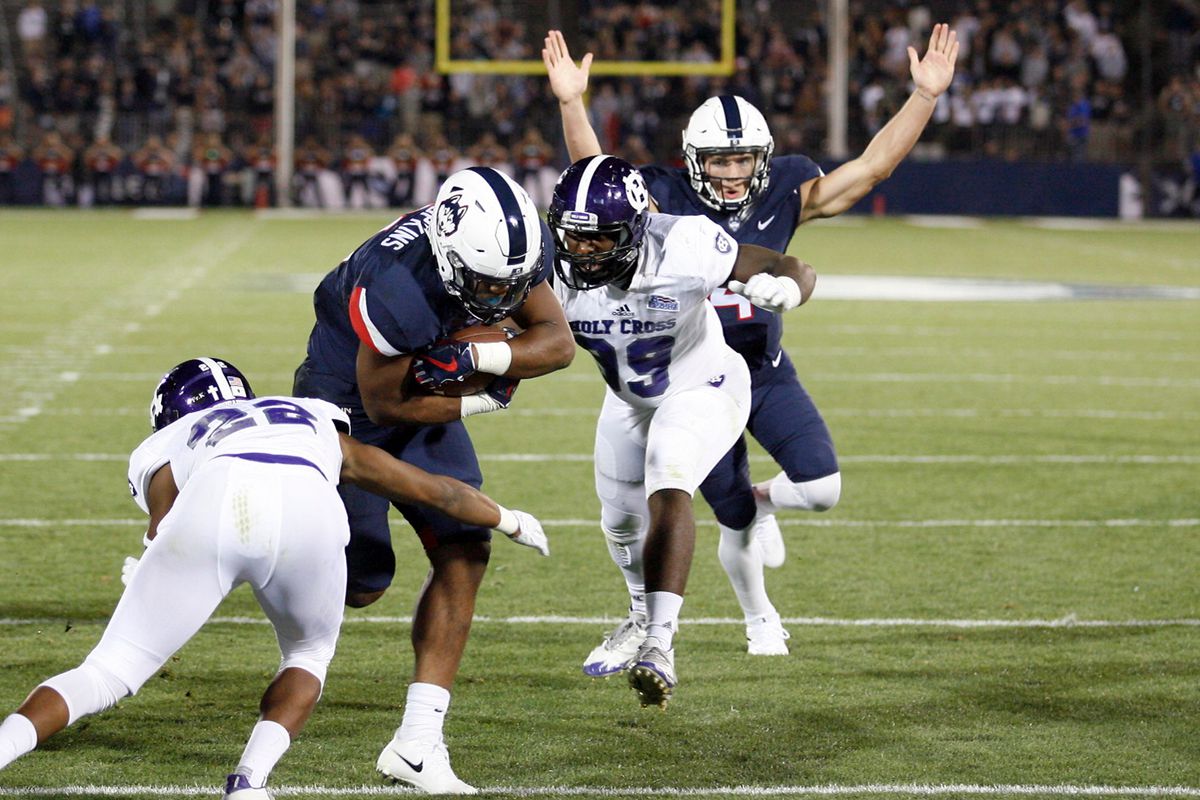 But the roster sizes do have a hidden effect that most fans do not realize.

The way to see this is a Patriot League football team today has a pool of 90 players they can suit up in August and say "these guys can be football players". The staff doesn't know at that point whether the players beyond the 90th athlete would never see the field or become a future all-Patriot League starter.  But this has an impact in practice beyond the starting two-deep - on the scout teams, who are the people that challenge the starters to become the best they can be.

And in the game of football, the consequences for a lack of depth can be severe.

Take Fordham, where RB Chase Edmonds suffered an early injury and the Rams had to scramble for depth at that position.  Now imagine if the backup also gets hurt - with most FCS and FBS programs, there is a chance for that 91st invitee to camp to be promoted from the scout team into the starting lineup.  With a squad size of 90, though, who knows if there will be enough bodies?

Injuries are not the only attrition that happens in college football programs.  Kids get homesick, quit the team, or get in trouble.  In normal FCS programs, the pool of players on your roster is deeper, so you'll at least be able to have enough bodies to compete in football games if something like that happens.  But at Patriot League schools, that can end up being a full-blown crisis.  What if mono took out the entire starting offensive line?  Would any Patriot League school be able to have a full two-deep in that eventuality?

Like any good debate with no clear answer, it is difficult to pin the question of competitiveness on any one thing, whether it's use of scholarships at hand, more difficult scheduling, or any number of other factors.  But a good discussion on removing the limits on roster sizes should be a part of that discussion, because in my opinion it is having a profound, deep impact across the board in the Patriot League.

LUHawker said…
Lehigh's defense giving up 500+ yards per game and a 45-50 ppg doesn't seem to have anything to do with roster sizes. The 24+ guys that see the field on the defensive side would seem to be the ones the coaches want so not having more guys seems like less of the problem.

I'd be more inclined to think it is the limited contact in practice. You can develop good offenses without the tackling and hitting, but not on defense as that is predicated on making tackles.

I think its an interesting angle, but feels like a less impactful problem. It might not be irrelevant, but doesn't seem to be the driving issue.
3:46 PM

Anonymous said…
I guess if you could recruit 200 offensive guys and 200 defensive guys and 20 specialty guys, then the 11, 11 and 2 you put on the field might be slightly different than the 11, 11, and 2 put out if you only recruited 90 guys total, recruiting not an exact science, but if you are recruiting 90 to fill say 44 2 deep spots, you should not be missing much
4:59 PM

Douglas said…
Coach Coen made statements in a recent Ch 2 interview that was posted about team size that is making it harder to practice... Are there no Walk ons and are they limited?? Can there be a walk on that is getting need based aid like any other student??? I also think they can only offer full scholarships where as before they could offer Need based was a half scholarship and counted half. Now.. that same amount of scholarship aid gets you one player not 2...
4:17 PM