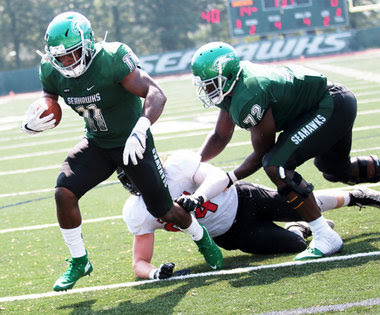 Most of the teams on Lehigh's football schedule have become so familiar that it seems like they are on the Mountain Hawk football schedule every single season.  Ivy League teams, Villanova, Monmouth... to anyone following Lehigh football over the last decade, they are names fans have heard of.

That's nothing against the Seahawks, who have played many Lehigh opponents in the last five years (Lafayette, Central Connecticut State, Monmouth, Georgetown, Holy Cross, and Colgate in the FCS Playoffs in 2012).

But, strangely for a school so close to Bethlehem, Wagner has never played Lehigh in football.  That will change this season, when the Mountain Hawks travel to Staten Island to compete in their only night game of the year.

Wagner College competes in the limited-scholarship conference called the Northeast Conference, or NEC.  The NEC used to be the home of Monmouth before they jumped to the MAAC in all sports but football, and is the current home of Central Connecticut State, whom Lehigh defeated 20-14 in their last meeting in 2015.

The Seahawks' head coach is Jason Houghtailing, in his third year after the only head coach Wagner had ever known, Walt Hameline, stepped down from the head coaching portion of his job, retaining the office of athletic director.  Houghtailing has a 7-15 lifetime head coaching record, but most of those losses game in 2015 - last season they went a respectable 6-5 and defeated the NEC champs, St. Francis (PA), on the final weekend of the season.

The Wagner media guide says the Seahawks return 8 starters on offense and 8 starters on defense,  none more important than Wagner's Aaron Rodgers-lookalike QB Alex Thomson.  The 6’5, 225 lb senior could be the best quarterback in the NEC, and he should rack up yards and points this year, after getting 2,436 yards passing and 16 touchdowns last season.

In College Sports Journal's preseason NEC picks, the Seahawks were picked to finish 3rd, and with their strong finish last year in NEC play, it's not out of the realm of possibility that they will be competing for the title and an FCS Playoffs autobid.

He also has Wagner's leading rusher, RB Denzel Knight, and Thomson's leading receiver, 6'6, 210 lb WR John Williams, are also coming back, so at all the important skill positions, the Seahawks have someone important returning.   On offense, the Seahawks play a 3 wide receiver base set that balances the run and pass fairly well.

Also, worryingly, LB Santorini Graham, Wagner's leading tackler last year, also returns, so it might not be wise to look at Wagner's two-year record and assume a win is all but assured.  Wagner plays a conventional 3-4 defense.

Personally I'm excited to head up to Staten Island to see Wagner since it's a venue I've never been to before.  Hameline Field at Wagner Stadium is small, capacity, 3,500, but it's a pretty field, based on the pictures.

But the big concern about the Wagner game isn't the field, it's the thought that Lehigh might forget about the game, the fact that it's on the road and is the final out-of-conference game the Mountain Hawks will play before the big Patriot League games show up on the schedule.

It's early, but I'm personally really looking forward to this one.