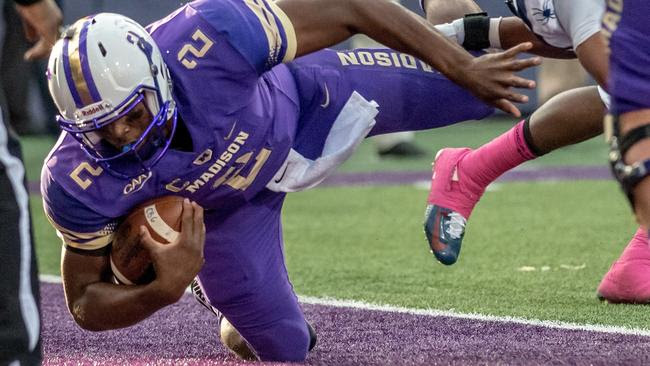 The story of the week in James Madison after their loss to Richmond wasn't the fact that College Football Gameday was there, nor was it about their big CAA conference loss, which took them out of the drivers' seat for the CAA title and conference autobid.

It was the fact that their superstar quarterback, QB Vad Lee, sustained an injury that would require surgery and take him out for the remained of the season.

The play didn't look like much.  The Dukes, who were already down by two touchdowns, saw Lee simply try to make something happen on a routine 2 yard run left.  A shoestring tackle by Richmond's linebacker wasn't particularly dirty, though in retrospect it looked like his foot was tackled awkwardly.

A play afterwards, Lee remained in, and collapsed after hucking a deep pass, and his incredible career at JMU was done.

A look at Vad Lee's injury. Was hobbled before he threw pass to Ravenel pic.twitter.com/bsbJJm4mAx
— Matt Jones (@MattJones36) October 26, 2015


It's a horrible injury to happen to anyone, anywhere at any level of football.  But it has brought into focus how dependent so many teams are on their quarterbacks.

Lee is hardly the first MVP-level quarterback to go down this season.

Another Walter Payton candidate, Villanova QB John Robertson, went down with a season-ending injury and saw the nationally-ranked Wildcats fall out to a mere afterthought in the CAA title race (not to mention the FCS playoff race).

The gold standard of FCS programs, North Dakota State, is not immune, either.  Bison QB Carson Wentz went down, and the once-dominant FCS team is now sitting behind Illinois State in the Missouri Valley football conference standings.

In all of college football, depth has become even more important than ever.  It seems like injuries are diagnosed more quickly, and players held out more quickly, than ever, thanks to an increased lookout for head injuries and early detection of other potential problems.  Pairing with this, counterintuitively, is a seeming increase in the number of serious, season-ending injuries, like Lee's.

It's hard to see what the solution is.  Rip up all the artificial turf, which makes players move faster and thus put them more at risk for injuries?  That's unlikely to happen, and besides, Lehigh, who plays their home games on natural grass, is as injured as many other teams this season.  Better equipment?  It may help, it may not, but it will take years to find out.

Could it be play-calling?  Lee, known throughout FCS as a dual-threat QB, wasn't afraid to run the ball.  Yet it wasn't a play-call that got him hurt, or exposed.  It was a normal, broken play.

Probably the solution is even greater emphasis on the physical training before the season, and having a world-class training and conditioning staff.  What's scary, though, is that JMU was the best conditioned team I've seen Lehigh play all season, and that still didn't help Vad Lee escape injury.