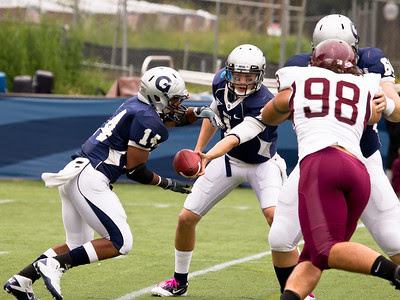 Head coach Rob Sgarlata should be a trendy pick for coach of the year in the Patriot League.

In a year when Georgetown was picked last in the preseason poll, Georgetown instead is playing meaningful football games at Halloween, and have a golden opportunity to finish above .500.

And they have to be looking at the game versus Lehigh as a critical one to achieve that goal.

First, there's the matter of Fordham.  While beating the preseason favorite Rams are high on the list of all Patriot League fans, the odds of them beating the other teams on their schedule, Holy Cross and Lehigh, are much greater.

Lehigh also happens to hold the second-longest active winning streak of consecutive wins against the same opponent (14).  The longest current streak is Penn over Columbia (18).  It's no wonder that the Georgetown faithful might think that, with Lehigh having a down season last year, that this is the year that the streak is broken.

Part of the great thing that offensive coordinator Michael Neuberger has brought to the Hoyas is stability.  For the first time in three years, Georgetown has run the same offense from a returning offensive coordinator.  In 2012 and 2013, they changed coaches after the season.

The base part of Georgetown's offense with a pro set, tight end and slot back, seems similar to years past.  Like in years past, overall, they've also struggled putting points on the board, Lafayette and Marist games nonwithstanding.

Georgetown actually balances the run and pass better than you might expect, and have an experienced signalcaller, senior QB Kyle Nolan, throwing the ball.   The 6'5 Nolan is a good athlete that is not afraid to take off with the ball and run with it for a 1st down, complementing the running game of senior RB Jo'el Kimpela (553 all-purpose yards, 1 TD).   Senior FB Troye Bullock is primarily a blocker, though he also catches passes out of the backfield.

Kimpela is an impressive runner, but he's pretty much a one-man show right now rushing for the Hoyas aside from Nolam.  Sophomore RB Issac Ellsworth is the only back that could give him a rest, but he doesn't even have 100 yards on the season.  It also demonstrates that the Hoyas' average time of possession is 27 minutes per game, or 96th out of 123 teams of FCS.

Where the Hoyas have made the most hay is in the passing game, with Nolan spreading the ball to junior WR Justin Hill (571 yards, 6 TDs), junior TE Matthew Buckman (192 yards, 3 TDs), senior WR Harry Glor (119 yards), and senior WR Jake DeCicco (386 yards, 2 TD).  (DeCicco has a brother, WR Jimmy DeCicco, who was a star receiver on Colgate.)

If these names sound familiar, it's because they all are exactly the same cast of characters from last year - only better.  Hill in particular has blossomed into a big weapon - his touchdown grab at the end of the first half could have been considered the biggest play of the game on offense for the Hoyas, and was the score that ultimately held up.  (In fact, Georgetown is 4-0 this season when Hill has caught a touchdown pass.)

The Hoyas used to be small and athletic across the line, once upon a time, but those days are long gone.  Now, Georgetown has offensive linemen that are plenty massive, like, for example, 6'6,  300 lb senior OL Kevin Liddy.

Head coach Andy Coen called Georgetown's defense very similar to Fordham's.  The biggest difference between the two is that the Hoya defense is way better statistically than the Ram defense.  In their Patriot League games this season against Lafayette and Bucknell, the Hoyas allowed 16 points in total - both wins.

Interestingly, most of this great defense has come about after a large amount of the Hoya defense graduated last year.

One of the big reasons there wasn't a big dropoff from last season was the return of junior DE Phil Novacki (40 tackles, 6 1/2 tackles for loss) after being out for the 2014 season.  Originally a linebacker, the 6'4, 255 lb defensive end moved to the front of the defensive line and didn't miss a beat.

But the real strength of the defense is at linebacker.  Senior LB Matt Satchell (79 tackles 9 1/2 tackles for loss, 2 forced fumbles) was a monster last week with 18 tackles, 13 of them solo tackles.  Right behind him are junior LB Leo Loughery (64 tackles) and sophomore LB Dan Yankovich (63 tackles), closing out a very effective front seven for the Hoyas.
The defensive front's pressure is a treat for the Hoya secondary, where senior CB Ettian Scott (2 interceptions, 17 passes defensed) and junior SS Garrett Powers (35 tackles, 3 pas breakups) have been effective this season.  Sophomore FS David Akere, a starter last year as well, also returns, joining sophomore CB Jelani Williamson at the other corner.

Worryingly for Lehigh, Georgetown's defense tends to get better as the game goes along.  In their three Patriot League games this season they've let up a grand total of 0 points, as in zero.

Junior PK Henry Darmstadter has continued to be automatic on extra points (18/18) and has been near-automatic anywhere inside of 37 yards, continuing from last year's fine season.  Other than that aberration, Darmstadter has been automatic, though the problem is he hasn't had that many chances to kick extra points (10/10).  Junior P Harry McCollum, the regular punter, was out versus Bucknell, so junior P Ben Priddy took his place last week.  It's unclear if McCollum will be back this week.

Junior WR Jake DeCicco returns punt again this year, and he's a definite concern, having already achieved a 30 yard return this season.   On the kickoff team, sophomore RB Issac Ellsworth has had a great season thus far with 614 yards and a 23 yard average.  He's come close to breaking one for a touchdown.

1. Screaming Screens.  One way to avoid a fearsome pass rush is to punish overaggressive defenses through out passes, and whether the quarterback will be junior QB Nick Shafnisky or freshman QB Brad Mayes, I'd hope that a nice diet of screen passes to sophomore WR Troy Pelletier will be a part of the gameplan.

2. Double-Team Martin.  If Martin has been the key for all these good things for the Hoyas on offense, then shutting him down should make life tough for Nolan and the Georgetown offense.  The less Martin is in their gameplan, the more the defensive front has a chance to wear down the Georgetown offensive line.

3. Turnovers.  I don't care how they happened in prior games, but Lehigh's best chance at victory is looking into the future at a happy scoresheet with 0 next to FUM and 0 next to INT.  Georgetown offers an opportunity to clean up this part of the game, and it will be needed if Lehigh is to get some success in November.  0 FUM and 0 INT will make me 100 happy.

Georgetown is an interesting team, certainly defying preseason expectations and a squad that is probably looking at the scoreline from last weekend's 59-42 loss to Fordham and licking their chops a little.  Beating Lehigh and ending this streak, and beating them in a place where no living Hoya has celebrated a Georgetown win, would be like a Super Bowl victory to them.

Could this be their year, with key injuries to Lehigh players, and the team possibly down a bit emotionally after last week's loss?

It doesn't feel like it from this end, where the Mountain Hawks, despite the inconsistency, has been able to put points on the board.

Jumping out to a quick lead I think is going to be critical for this Lehigh team.  If they can do that, and I think they will, they should be able to manage to keep Georgetown from finally celebrating on their field this weekend.