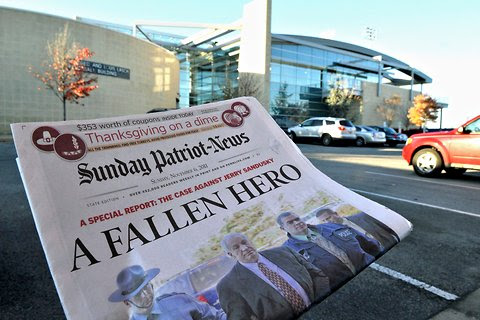 I'm thinking about starting something daily during the work week - a section of five lunchtime reading links I found interesting.

Most times these will involve the Patriot League, FCS football, college football, or something else that I find interesting or amusing.

Let's get right to it: Your LFN lunchtime reading for today.

"This could lead to irreparable damage at UAB in its relationship with the community," Williams said.

LFN Hot Take: Hard to disagree with Rep. Williams.  With all the blood and treasure and virtual ink-spilling about UAB droipping, then re-studying, then appearing on the cusp of reinstating, football, it's easy to see a rift between the school and community that could take a decade or more to recover.  And that's not even bringing up the fact that any conference that would take UAB would now have to consider that as well.

UMass Ready for Next Step - ajerseyguy.com


There will be moments in the next several weeks and months when new University of Massachusetts athletic director Ryan Bamford will feel like the Greek mythological character Sisyphus, whose fate was to perpetually push a huge boulder up a hill, only to have it roll back down the hill past him.

Bamford was hired to do what John McCutcheon couldn’t do, slide the Minutemen into the life of FBS football with some reason of success and make the UMass athletic programs profitable and relevant.


LFN Hot Take:  Sisyphus may be looking at Bamford and shaking his head.  UMass' eventual divorce from MAC football is a problem, as Mark Blaudschun says, has only one realistic destination: membership in the AAC with UConn and Temple.  What's not said, though, is UConn would rather let Kevin Ollie go to North Carolina that allow their regional rival to even pretend they're equals to the Huskies.  Ironically, UMass' best shot at the AAC might be if UConn leaves for a Power 5 conference.. which would defeat the purpose of landing there.


University of Montana Athletic Director Kent Haslam announced on Wednesday that all11 games of the 2015 football season will be televised, continuing the tradition of all Griz gridiron contests being on television.

ESPN will televise the season-opener versus North Dakota State on August 29 and Root Sports will broadcast five conference games. Cowles Media and the Big Sky Conference have come to an agreement on the other conference contests, and in addition, Cowles Media has agreed to carry the non-conference games versus Cal Poly and at Liberty.

LFN Hot Take: One of the hidden secrets of the popularity of the FCS football programs in Montana and North Dakota is the presence of games broadcast on a web of regional networks, preempting other programs on Fox, NBC and ABC.  These types of deals are the gold standard at the FCS level, and it's always a great thing to see these types of deals hammered out.  The only question now is whether some or all of these games will be available across the country via online streaming.


Gut reaction: The best player in the world vs. one of the best starting fives in the NBA, so you never know what can happen. The problem with predicting this series is the injuries to both teams. Depending on how healthy certain guys are, it could go either way. I was reading Mike Rupp’s NHL Playoff Preview and he pointed out how nobody in hockey is 100-percent healthy at this point. A lot of people don’t realize that the same could be said for the NBA playoffs. Kyrie Irving says he’s going to tough it out and give it a go in Game 1, but how will that affect his quickness?


LFN Hot Take:  Lehigh's own C.J. McCollum has been previewing the NBA playoffs for the Players Tribune, and offers a fantastic insider perspective on the games.  Would I be as interested in these games if Lehigh's most famous recent alum weren't writing it?  Probably not, I admit, but reading his perspective truly reels me into the world of the NBA - to his great credit as a writer.  (Though I admit it also validated my trading for J.R. Smith in my basketball fantasy league, too, which helps more than you might imagine.)


While American Pharoah has been winning six of his seven races and making his way to a historic bid next month for thoroughbred racing’s Triple Crown, his owner, Ahmed Zayat, has been contesting a federal lawsuit brought by a felon that alleges Mr. Zayat has failed to pay a $2 million debt he ran up betting via a website in Costa Rica.

LFN Hot Take: Why bother with fictional crime shows when you have this as your reality?  This case has it all: offshore gambling sites, the owner of a potential Triple Crown winner, bookies called the Rubinsky brothers, and a judge presiding over the case named William Martini.  It's like a lost Elmore Leonard book come to life.  How can you not follow this?