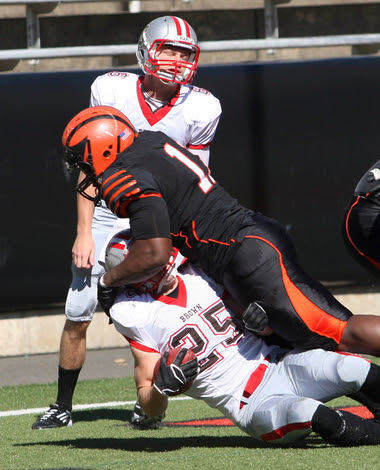 "Once you have some positive things going, you start saying, 'Wow, I know Lehigh is a great team'.  We started playing football, and it was nice to see.  After this game, there's going to be some 'attaboys', 'good efforts' and everything else, but for us to improve as a team it's got to go beyond the great effort, the good effort, the hanging in there.  It's not enough.  It can't be the case.  It needs to be winning a game that we gave ourselves an opportunity to win."

That was Princeton head football coach Bob Surace last year after his Tigers came close to beating the Mountain Hawks at Murray Goodman last season, but coming up just a bit short, 17-14.

Princeton's strong effort that Saturday last season was an indicator that the Tigers, who were 1-9 in 2011, were poised to be a much better team in 2012.

After a 5-5 season, where the Tigers beat Harvard and Yale - their two biggest rivals - they enter 2013 with goals a lot bigger than a "good effort against Lehigh".  Their goal is re-establishing themselves atop the Ivy League, with their first stop hosting a nationally-ranked Mountain Hawks team on national television.


After two tough years, Surace finally saw results in his high-octane offense bear fruit last season.  Part of the reason for their success came from continuity, from both Surace and his coordinators.

Offensive coordinator James Perry, now in his fourth season for Surace, explained it to Paul Franklin of the Trenton Times at Media Day a few weeks ago.

“We’re also bigger, stronger and faster, and that’s noticeable. So that just makes our jobs that much easier. I’m sure there are ways he’s grown as head coach,’’ he added. “But his consistency, the way he stays on point, is almost amazingly so; through rough times and good times.’’

More than 60 players stayed around this summer to work out, a contrast to those who did so the staff’s first year. It’s called commitment.

“There’s 6 a.m. workouts, then they go off to (jobs) and are back here at night; throwing, all those type of things. That’s what championship teams do.

It took three years for things to finally click, but it indeed did click last season for the Tigers, and the continuity has really paid off.

“We’ve been in the system four years now,” OL Max Coale said at the beginning of Tiger preseason practice. “We can help each other out a lot more than, say, when we were freshmen. Seniors then were learning the new system the same time as us.”

This season Lehigh will see a Princeton team that is more comfortable with head coach Bob Surace's vision, and higher expectations.  They're also going to be raring to go on Saturday night for a whole host of reasons, none playing to the Mountain Hawks' advantage.

They're going to be the last Division I football team to start playing football in the 2013 season.  They'll be at home.  They're expected to make a great impression on the rest of the Ivy League.  And it's also going to be on national television, on the NBC Sports Network.

And Lehigh goes into this game, at a bare minimum, with distractions.

There's no need to further go over the bad news from yesterday again - the fact that four Mountain Hawks are suspended indefinitely.  As Keith Groller of the Morning Call also reported in the paper today, it appears like no starting players were affected by the suspensions, based on the revised two-deep, so it appears the impact will be minimal, at least as it regards the starting 11 on offense and defense.

But the fact remains that the player suspensions was the first of its kind involving the football team since Lehigh head coach Andy Coen took over eight years ago.  For sure it's an unneeded distraction in a time when the entire team needs to be focused on how to stop 6'2, 305 lb Princeton DE Caraun Reid, who is probably going to be an NFL draftee when he leaves Prince Town.

"I'm not happy about it," he told Groller. "It's something that will have to be addressed at practice and it's certainly not helping us be better student-athletes and better football players, and that's where the disappointment lies.

"I'm disappointed from a personal standpoint, but I know it happens," he continued.. "I know it happens every week all across the country, so you just have to deal with it and be professional. We have to stick to what our values are and make sure we're consistent."

As you'll see, too, the Mountain Hawks also enter this game with potentially significant injuries as well, making what was already going to be a tough matchup even tougher.  Princeton was never going to be an easy out.

But even without the suspensions and the injuries, senior RB Keith Sherman isn't using that as an excuse this Saturday.

"Basically we just have to stay focused on the field," he told me.  "Things happen in life on and off the field, and the coaches do a good job of refocusing the team.

"Having said that, it's up to the senior leaders to reflect those sentiments in our actions," he continued.  "We can't get side tracked with the off-field events because we still have a job to do and that's sticking together and winning a championship. Everyone understands that we make mistakes because we are human, but what matters most is how we bounce back and overcome the adversity."

"We have great leaders on this team who keep us in check and will keep us focused on our goals," junior CB Damien Brown said to Groller, too, in yesterday's presser. "It's unfortunate for this to happen, but we know we have a game to play on Saturday and that will be our main focus. I have learned some lessons in my career here, and hopefully we'll all learn from this situation."

The word "adversity" is thrown around in sports an awful lot, used to describe sporting situations and overcoming things like score deficits, injuries, or turnovers.  Personally, I'm not a fan of talking about adversity in this context: to me, adversity is overcoming something more than a 20 point deficit.

For the first time in a long while, Lehigh will be asked to overcome some adversity in the true meaning of the word this Saturday - some of it self-inflicted, some of it not their fault.

How this team focuses in the face of the adversity is the key to Lehigh's performance this weekend.

Game Notes
The game notes posted by Lehigh this week don't take into account player suspensions.  Senior CB Jamil Robinson may see more time in the secondary as a result of them, but the suspensions pale in comparison to the other injury news coming out of Cundey Varsity House.

Mike LoRe's injury report delivered the big news that star senior LB Nigel Muhammad was "really banged up" and it will likely preclude him from playing much, if at all, this Saturday in Princeton.

If he's unavailable, it would be a huge blow, because his backup, promising sophomore LB Matt Laub, has already been ruled out thanks to a shoulder injury suffered against Monmouth.

If neither are able to go, a duo of underclassmen would likely take the field in their place, led by sophomore LB Mat Verdon and junior LB Tashaun Mitchell, according to LoRe.  Freshman LB Pierce Ripanti, too, might also make an appearance on the other side at linebacker.

That would be significant enough, but that's not all.

One of the centerpieces of Lehigh's "O" line, senior OL Matt Lippincott, is "questionable" after being held out of practice this week with a back issue.

If he's unable to go, freshman C Brandon Short would get the call in his first-ever collegiate start.

And then there's junior TE Tyler Coyle, still recovering from a shoulder injury, who will be yet another gametime decision for the Mountain Hawks.  If he's still out, junior TE Dylan Colgate will start in his place.

If there were ever a time for an underclassman football player to step up and be counted for Lehigh, it would appear that this weekend is the time and place.

Weather Report
The weekend's weather Saturday night is going to be perfect in Princeton.  After a high of 77, the temperature is only supposed to dip into the mid-60s by the end of the game.  It should be fantastic weather for a night of football.

Famous Princeton Alumnus You Didn't Know About
A lot is made of former presidents, Supreme Court Justices, and other famous names in the world of literature and entertainment having attended the New Jersey school.  But did you now Ethan Coen, one of the famous filmmaking Coen brothers, attended Princeton?  While his brother Joel was in NYU studying filmmaking, Ethan was completing a four-year degree in philosophy.