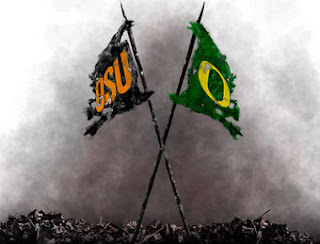 Few analogies are as overwrought as the consistent characterization of football being a "war".  I do it; Pat Forde does it; everybody does it.

But it seems strangely appropriate to use this as my "Sunday Word" this weekend. With Democrats and Republicans making every single tiny appointment and legislative action as an epic struggle between good and evil, anything on the political front these days feels dangerous - whether it means driving the American economy into a ditch, or not.

So it goes, too, with all the big issues on the docket in the NCAA this past week.

If you thought Congress was the only body that had walkouts, no-shows, financial straitjackets and throwing the least well off under the bus, you should see the "war" happening in the halls of the NCAA. (more)


NCAA president Mark A. Emmert kicked off his "presidential retreat" this past week with a very ambitious agenda.

"The goal is to examine the critical issues facing intercollegiate athletics today and to – collectively among all the presidents – determine the course of action that we need to be taking to address those challenges We especially need to address those challenges in the three key areas we’ve described: financial sustainability, integrity and academic performance.
We need to recognize that incremental change is insufficient to address those concerns and challenges. We need in several areas to have pretty systemic change if we are going to get ahead of these issues."

Restoring integrity in collegiate athletics, in an offseason dominated by Jim Tressel's issues and a slew of other violations, was never going to be an easy task.  And when it was revealed by ESPN's Dana O'Neil that the group "wouldn't have the authority to enact legislation", it seemed even more like pure political posturing.

And adding fuel to that speculation was none other than the New York Times' Pete Thamel, who noticed the absence of two important people from the meeting:

Two key people who did not attend the meetings were Mike Slive, the commissioner of the Southeastern Conference, and his counterpart in the Big Ten, Jim Delany. Few would dispute that they are the most powerful men in college sports. Although the presidents of Hope College and Molloy College might have provided keen insight into the future of college athletics, they are not exactly the rainmakers.

It's impossible to picture this scene in the NCAA without also picturing the Obama administration's attempt to reform the banking industry in the face of the 2008 meltdown - with certain bankers having "more important things to do" than talk to the president. Apparently, Silve was more interested in seeing if Texas A&M's interest in joining the SEC was real than attending a summit held by the NCAA.

Almost immediately as the meetings started, the talks were not only hijacked by the swirling rumors of A&M's departure.

Instead of debating the integrity of the game, the subject talked about the most was instead... something Delany and Silve themselves were much more interested in talking about - the "debate" about including the "full cost of scholarship" to the scholarship cost made available to potential athletes.

As any military buff can tell you, a key strategy in "war" is to shift the battlefield from the areas in which you can't win onto ones that you can.  On the battlefield of "integrity", it's a losing talking point for the SEC and Big Ten, whom have taken some huge hits of credibility for the Tressel and Cam Newton affairs, among others.

Adding the "full cost of scholarship" - in other words, a "travel and monthly stipend" that has the effect, to some, of paying athletes to play at their schools - is a proposal, I've argued, that is less about helping athletes than it is giving a competitive advantage to hyper-rich athletic departments over other schools.  (And most of those schools, unsurprisingly, are members of the Big 10 and SEC.)

That even in their absence that "full cost of scholarship" was given credibility by the NCAA's decision to "consider" the idea has to be seen as a masterstroke by Delany and Silve.  Tressel's and Delany's reprehensible behavior for dragging out the Terrelle Pryor affair to allow The Ohio State University to pocket $6 million in Sugar Bowl money got no talk at all during this week, ostensibly, when the NCAA was supposed to discuss integrity.  Instead, it was all about "pay-for-play".

Even worse, in the NCAA's zeal to make it seem like they were being serious about "cleaning up college sports", they made a horrible decision.

The NCAA uses a measure called the Academic Progress Rate, or APR, to attempt to track the eligibility of athletes once they matriculate.

But as I've argued before, the APR calculation is incredibly unfair to Historically Black Colleges and Universities, or HBCU's, since the mission of HBCU's is frequently to educate people that traditional colleges and universities miss.

In many, many circumstances, the issue is not high-scale cheating.  It's financial - if a kid cannot afford to play on the team, the school's APR takes a giant hit.  Many of these teams have retention rates higher than those of the schools themselves, but get slammed by the NCAA because their calculation cannot reconcile this fact.

In the last APR cycle - unsurprisingly - nearly two-thirds of all the APR violations came from athletic programs of  HBCU's.  None of these teams were funneling players to the pros.

In his initial reaction to the list of "violators", it seemed like Mr. Emmert was cognizant of the issues HBCU's face:

"You're right that there are a number of historically black colleges and universities that have been penalized, especially through the postseason ban," Emmert mentioned in the press conference announcing the APR penalties. "We are concerned about that, have met with those institutions to help them develop ways for improvement and to help provide resources to help them be successful."

But after the "summit" this weekend, Emmert seemed to throw away his campaign promise like so many politicians:

Following up on the retreat's mandate to toughen academic standards, the NCAA Board of Directors voted to ban Division I teams with a four-year academic progress rate (APR) below 930 from participating in the postseason, including all NCAA tournaments and football bowl games.

Here's the best part, though:

Emmert tossed out the 930 figure after the retreat and that's the number that was approved the following morning.

That Emmert would acknowledge that there's something wrong with the APR calculation - and then, three months later, "toss out" the figure of 930 in order to make it seem like he's doing something for academic reform - is beyond belief.

Did he even stop to think for a second what that would do to HBCU's?  A quick check of the APR database for football shows that with a new 930 threshold, exactly ONE school in an HBCU conference - Norfolk State University - would exceed the 930 number.

It's not unreasonable to think that this new threshold that Emmert "tossed around" could have the real effect of forcing the MEAC and SWAC to reclassify to Division II.

Is THAT what you want, Mr. Emmert?  The forced reclassification of HBCU schools?  Schools whose mission it is to educate non-traditional students don't have a place in the new NCAA?

Do you care about HBCU's, Mr. Emmert?

I'm not sure what's more reprehensible - the fact that an APR, without reform, could mean the declassification of the HBCU athletic conferences, or that Emmert just tossed the numbers out so cavalierly without an ounce of thought as to what the ramifications might be.

Never has the old saw been so true: that the NCAA is so mad at Ohio State, they're threatening to declassify the MEAC and SWAC right out of Division I.

Like the "wars" in Congress concerning the debt ceiling, this NCAA dog-and-pony show ended in almost the exact same way: endless political posturing, rule changes that harm more than they help, and an ultimate agreement that will do little to solve the underlying problems that plague them.

The only hope now is that Mr. Emmert and a whole lot of college presidents can agree that the "war" is senseless - and come to some common-sense ways to actually fix collegiate athletics in a way that doesn't hammer the schools that are doing the most with the least.

The "war" should be directed at the Ohio State's and Auburn's, not HBCU's.