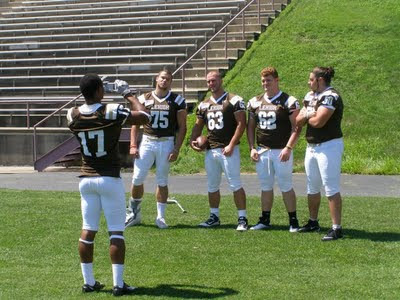 Not only did it feature brand-new uniforms courtesy of Under Armor, but it also featured hilarious one-on-one interviews featuring CB Jarard "Main Man" Cribbs and members of the team.

This year continues the tradition, with senior LB Devin Greene playing the part of host on Lehigh's "Behind the Scenes" segment on Lehigh's official report on preseason camp.

Greene seemed to have less adrenaline, and more cool, than Jarard - but he still seemed to show a looseness about the team.  It's a trait that worked extremely well for the 2010 Mountain Hawks - and a trait that everyone hopes will be the key to success this year as well. (more)

From the video, the 2011 team seems to have a similar energy as the 2010 one - a hard-working energy, but also with the ability to cut loose and have some fun as well.  In that way, they seem to reflect the energy of the general Lehigh student body - you don't succeed at Lehigh unless you're working real hard, but you also need to be able to celebrate in a positive way as well.

A cynic might say that we don't learn that much from these light moments on picture day, when the team takes time out from physical preparation to cut loose in a positive way.  But to me, Greene's video does show us about the true nature of the team, away from structured Q&A from reporters and passionate fans in a press conference setting.

Probably the best part of the picture day video shot by Lehigh Sports was senior DB Kenyatta Drake's impressive show of athleticism - a backflip, after which he was quoted as feeling "loose" enough to do a few hours more of drills.

(Either that, or coach Andy Coen showing off his work in the weight room in the summer - it's a really tough call.)

Practice so far hasn't been all pictures, smiles and interviews - it's also about preparing for the upcoming season, of course.

In Lehigh Sports' initial article about the open of preseason practice, coach Coen spelled out his team's thoughts going into the year:

“The guys weren’t happy with how the season ended. They are eager to do more than they did a year ago. We haven’t talked about repeating or defending a championship. We’ve talked about earning another championship, about how we have the bullseye on our backs. It puts a little pressure on our guys. Our expectations are high and we’re working the right way to meet those expectations. They understand the situation they’re in.”

Coen knows there are still a lot of areas to improve upon since the end of spring practice.

“We didn’t lead the league offensively in any category,” Coen said. “Obviously the most important statistic is how many games you win but there still are so many areas to improve upon. We have to get better running the football and do better in short yardage and goal line situations. We have to take better care of the football. Our defense did a nice job creating turnovers last year but we still turned the ball over too much.”

In the video, Coen talks a lot about how excited the team was about getting prepared for the upcoming season. "I get the sense by being around these kids the last day and a half how excited they are about the challenge of the season ahead. That's what you need, a bunch of excited guys."

"I think the main difference between last preseason and this preseason is that we have a little more confidence going into the season," senior TE Mark Wickware said on the video as well. "Everyone is poised to follow off last year, win more games, and advance further in the playoffs."

"I've been thinking about camp fro three months now," senior DE Andrew Knapp also said. "It's nice to see the new faces with the freshmen, and a lot of guys who have been working hard over the spring and summer to accomplish what we want to get done this year.

Going into the fall, the biggest question mark on the team had to be the offensive line. With the graduation of OL Ricky Clerge and a guy who's competing for a starting nod on the NFL's Jacksonville Jaguars, OL Will Rackley, the "O" line was always going to take the longest to adjust.

Almost immediately in the first practice, too, senior OL Troy McKenna suffered an injury that has kept him out of camp in the early going, making things a bit more complicated as well.

"The line has been in transition," coach Coen told me, "and probably will be through this next week. We will have it sorted out by the end of next week. There's a lot of good competition there."

Coen, though has appreciated the effort on the "O" line in the two deep this far, which will almost certainly feature 295 lb senior C Keith Schauder and 280 lb senior OL Jim Liebler.

"Some of the freshmen linemen are getting reps because of the depth issues there," Coen said in the latest camp update, which also means that freshman OL Kyle Moore, freshman OL Wenner Nunes, freshman OL Matt Douglas, and freshman OL Cornell Herriott have been seeing a lot of time in camp as well.

What about another big training camp battle - running back? Coach Coen appears to have a lot of confidence in all three back in his stable this year.

"They each been impressive," he told me. "Sophomore RB Keith Sherman is much more complete then a year ago. Junior RB Zach Barket is stronger and I believe faster. Junior RB Marcus Dormevil' feet are very quick and he has juked many guys this camp. They can all play and its a good situation there."

All three bring something different to the table - 5'6 Dormevil's pure speed, 5'10, 205 lb Barket's terrific power, and 6'0 Sherman's overall all-around athleticism seems to be crying out for a nickname for the entire unit.

Add to that senior QB Chris Lum, junior WR Ryan Spadola and a deep stable of wideouts, and there's plenty to be excited about on offense going into the 2011 season.