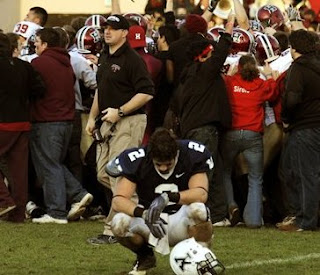 If there is one coach on Lehigh's schedule that understands the importance of historical rivalries, it's Yale's Tom Williams.

Two years in a row, Williams saw his team suffer excruciating losses to their huge rival, Harvard, in heartbreaking fashion.

And in Year Three of the Williams era, they might actually have the team to do it. (more)

Many Lehigh fans, unjustifiably, tune out the Mountain Hawks' games against teams like Harvard and Yale. If the Eli or Crimson aren't ranked in the FCS Top 25, to some fans they may as well not even exist.

But Patriot League football players and hard-core fans know differently - the Ivy League has some great players that line up on Saturdays.

And this day and age, Harvard and Yale are stacked. Many of their athletes are not only recruited by Patriot League schools, but BCS schools as well.

This happens in large part because the base financial aid package that Yale can offer its athletes can be every bit as good a deal as an athletic scholarship at a BCS-level school.

In essence, anyone whose family makes less than $100,000 a year can go to Yale for free, thanks to their endowment that is larger than the GDP of many African states.

This policy, plus the elite scholastic reputation of Yale, makes them able to recruit against BCS-level schools with a frightening level of effectiveness. Put it this way - would you walk on at Penn State, paying for a playing opportunity that might never come, or take a guaranteed four years at a Top Ten academic school - for free?

Case in point: senior QB Patrick Witt, who transferred from Nebraska in order to play his games at the Yale Bowl:

Eight months ago, redshirt sophomore Patrick Witt stood on the precipice of competing for the starting quarterback job at Nebraska. Last Saturday, he completed 22 of 27 passes for 216 yards and two touchdowns. Except that his white jersey had blue numbers, not red. And he played before 2,941 fans, about 78,000 fewer than the capacity of Memorial Stadium in Lincoln.

Witt maintained that the Georgetown game Saturday came at him just as fast as what he experienced in Lincoln, where the 6-4, 220-pound graduate of Wylie (Texas) High threw eight passes last season in a backup role to Joe Ganz.

"Here and there, there's a guy that's two-tenths slower on his 40 than a guy playing for Texas," Witt said. "In general, football is still football. I don't think it changes that much."

"If he's who I think he is," head coach Tom Williams remarked on him two years ago, "we're going to have a chance to win a bunch of games [with him] at quarterback."

Witt, an extremely talented and accurate drop-back passer, is by all appearances a great student and the kind of athlete any Ivy League or Patriot League team would be happy to have. Not only is his IQ off the charts, so is his football IQ. He's a great decision-maker, and will be difficult to stop.

Unfortunately, his story is also is the embodiment of the innate hypocrisies of the Ivy League in this day and age. For example, the Ivy League never redshirts athletes... unless, of course, he's coming from a BCS school in Nebraska, and he redshirted over there. And: the Ivy League is non-scholarship for the purposes of boasting about their league... but in reality, everyone at Yale is on scholarship who is making less than $100,000 a year, Witt included.

For coach Coen, there also might be some revenge on his mind as well, as Yale is one team that he hasn't beaten in his tenure as head coach at Lehigh.

Yale and Lehigh have a fairly good rivalry going, having met 20 times, including six meetings in the past decade. In 2006, the rivalry with the Eli was formalized with the creation of the "Yank Townsend Trophy", named after the only Yankee (i.e., student from Connecticut) who was in the Lehigh class of 1895.

After graduating, he would relocate to New Haven to be close to the rest of his family, where he would design many buildings and residences and cement his legacy for generations.

Yank's descendants sponsored the trophy to be presented to the winner of this game. It's a cool way to link these two historic schools, linked by academics and tradititon, a constant reminder to the history and football traditions of both schools.

But since the establishment of the trophy, it hasn't come close to making its way to Grace Hall.

And the last time Lehigh and Yale faced off would certainly be a time coach Coen would rather forget.

"I'm sitting here in front of my laptop, struggling to think of what to say," I said after a 7-0 shutout loss to the Eli where the Mountain Hawks lost on - of all things - a fake punt that resulted in a touchdown. "Losing a game where the defense kept Yale out of the red zone? Are you kidding me?" I added the next day in my "Sunday Word", "Zero".

But rather than folding the tent and giving up after the first time Lehigh had even been shut out at home, the Lehigh football team responded, going 3-2 and giving league leaders Colgate and Holy Cross a run for their money.

You could even argue that embarrassing home loss was the catalyst for the historic 10-3 season a year later.

A lot of the Lehigh players won't remember this game in 2009. But you can bet a lot of the players do - and that might bode well for Lehigh this go-around.

One very interesting development around the Yale program this offseason was that Army, who of course competes as an FBS independent, signed a deal to play Yale at the Yale Bowl to celebrate the 100th anniversary of the venue.

For the record, I think it will be great when Army plays at the Yale Bowl in 2014, and full credit goes to Yale athletic director Tom Beckett for making this historic game happen.

But I also maintain that this game should also be the spark of a larger debate on the non-scholarship nature of not only the Ivy League, but the Patriot League as well.

As a part of their game against Army, Yale has asked for a waiver from the NCAA to allow it to be a "bowl counter" - meaning should Army win, a victory over Yale would count towards their bowl eligibility.

The NCAA Rulebook states that in order to be a "bowl counter", schools must offer at least 56 1/2 scholarships.  While Yale scholarships all of its athletes, none of the aid is considered athletics specific, so for the purpose of the NCAA Yale doesn't count as a counter.

You could make a joke of this: When is a school with 100 players receiving scholarship money non-scholarship?  When they play in the Ivy League.

To me, it's not right that instead of opening up a debate as to the counter status of their "scholarship everyone policy", Yale is instead applying for a waiver to the rule, which allows Yale to claim they're "non-scholarship" while refusing to play by the rules that other non-scholarship (and need-limited leagues, like the Patriot League) play by: that is, if you're not counting them as scholarships, you're not a bowl counter.

When this was announced last fall, I was apoplectic:

Why isn't the Ivy League having an internal debate about ripping up every restriction they have on their football programs right now? Eleven game seasons? Bye weeks? FBS opponents? Postseason? Even "football scholarships"?

On the field, Witt is only one huge problem that the Mountain Hawks will have to face from this senior-laden Yale team.

Senior RB Anthony Thomas (710 yards rushing, 247 yards receiving, 10 TDs) is a quintessential Ron Jean-like diminutive back that leads a deep, experienced stable of rushers that come at opponents in waves. Thomas worked his way towards getting th bulk of the carries last year, though 6'1 junior RB Mordecai Cargill (290 yards) offers a change of pace from the speedy waterbug for the Eli.

The Bulldogs also return their two top speedsters at receiver in senior WR Gio Christodoulou (563 yards, 1 TD) and junior WR Chris Smith (452 yards, 1 TD). Witt does a great job distributing the ball, so it won't be easy to key on either guy. In addition to his receiving responsibilities, Smith is an excellent kickoff-return specialist that had 2 touchdowns, making him a threat on

And while the Bulldogs lose their blind side protection and their starting center from last year, they return a core of athletic linemen like senior OL Colin Krueger. Clearly, this team has a boatload of experience coming back on offense.

Senior LB Jordan Haynes, who led all Eli tacklers with 102, is the Bulldog team captain and a potential pro prospect at 6'1, 237 lbs. The heart and soul of Yale's defense, he has a terrific sense of the football with two interceptions and three fumble recoveries. One of those picks came at the goalline against Princeton, where he was playing centerfield and showed some soft hands to nab the pick. He's a dangerous player.

This game should be about a lot more than the "Yank Townsend Trophy" to Lehigh fans.

The Yale game may not get the same sort of recognition nationally as the games versus New Hampshire or Liberty. But that doesn't mean the game will be any less difficult. Matter of fact, it might be made even tougher.