November 16, 2019
You can read College Sports Journal's preview of the game here, and my mostly-football-free "Tailgate Report" here.

Below, we're going to do a quick once-over of Lehigh's game notes and possible injuries, then we'll dive right into 5 things to look for with Sacred Heart, my Keys to the game, and the cherry on top will be my Fearless Prediction.

Keith Groller of The Morning Call headlined his piece "Lehigh football tries to regroup at Sacred Heart with season slipping away".  Part of the article talked about the frustration of last week's 20-10 loss to Bucknell.

“We didn’t handle our business, but all you can do is learn from it and plan to fix it for the future,” senior WR Dev Bibbens said. “We need to win this game and get things turned around against a quality opponent. There’s always a lot to play for. Any time you have an opportunity to play a game on a Saturday, that’s a lot. We don’t take that opportunity lightly. We’re going to fight."

An already rocky week was made rockier by the fact that two Lehigh players, DB Brandon Spencer and RB Nate Hope II, announced that they were on the NCAA's transfer portal.  This had a direct impact on the starting two-deep on Lehigh's game notes.

This is on top of the fact that it is already confirmed that senior QB Tyler Monaco will not be suiting up this week after being injured last week vs. Bucknell.  It's not certain at the time of this writing whether QB Alec Beesmer or QB Addison Shoup will be starting this Saturday.

1. The Pioneer O line has been stellar.  Sacred Heart has an offense that has exploded at times this year, and their O line has been a huge part of that, giving up on average less than a sack a game and carving out big lanes for their running game.  As a Lehigh fan, I could be most worried about how the Lehigh defense will handle this unit. 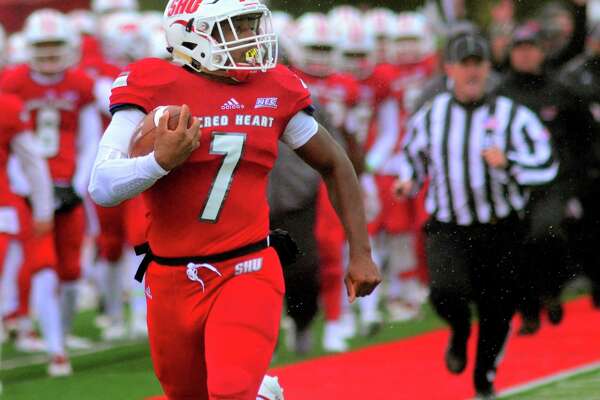 2. RB Julius Chestnut is one of the top runners in all of FCS.  Any recipe for a Lehigh victory involves the Mountain Hawks keeping the super sophomore from getting off any big plays.  He has 1,224 yards rushing already on the year, is leading the FCS in rushing, and he has two games to go.

3. Second Half Team.  Sacred Heart won 41-7 last week, but when you look closer at the box score you see that they were losing 7-0 at halftime and forced an amazing right turnovers in the second half.  It's not the first time the Pioneers have won trailing at halftime; in their 58-40 win over Lafayette, they trailed at halftime as well and exploded for 37 points.

4. Ball Control.  Though the turnover ratio is skewed somewhat by last week's game, Sacred Heart has done a great job not turning over the ball.  They're only lost the ball twice all year from fumbles and while they've thrown nine interceptions, last week's starter, redshirt sophomore QB Marquez McCray, didn't turn over the ball once in an efficient performance.  Assuming their game notes are correct, he will be the starter again this week.

5. Good pass rush.  Led by DE Chris Agyemang, the Sacred Heart defensive front has shown a worrying tendency to put good pressure in the quarterback.  He leads the team with 3 1/2 sacks, and the tram has 19 on the year.


LFN's Keys to the Game

1. Offensive line needs a show-me game.  Last week's stinker vs. Bucknell was an abject lesson in how lack of protection can ground and offense to a halt. The Lehigh offensive line has to demonstrate that they can be cohesive enough to give the rest of the offense a chance to cook.  Yes, there have been a lot of injuries and upheaval.  But this group simply needs to find some way to get things done.

2. Make Chestnut earn his yards.  Lehigh cannot afford to have Chestnut break loose for big plays.  He'll get his yards, but it's critical that he is made to earn every yard.  This will give Lehigh the best possible chance to win.

3. Rally from adversity.  If I were coach Gilmore, I would tell this team that when the story of the 2019 team is written, the narrative that will be associated with this team is "adversity".  Normally I hate to use that word, but in this case it is true, with injuries, the transition in head coaches, and other issues.  If Lehigh wins their last two games, they will have earned the right to put the word "overcame" in front of it.  Only, however, if they win.

If you are doing an analysis, there is plenty about this Sacred Heart team that can keep you up at night.  The Pioneers have a lot of things going for them - srnior day, the momentum of a winning streak, a great offensive line.  They've beaten Bucknell and Lafayette; they are likely to go into this game with a lot of confidence.

On paper, this isn't a huge game in terms of a championship.  Technically, even if Lehigh loses they could still be in the hunt for the autobid and Patriot League title.  That situation is out of their hands.  They will have to see what happens.

But in terms of overcoming adversity, this is the game where Lehigh needs to do just that.  They need to earn that redemption before the most important game of the year.  Kids leave.  Kids get hurt.  Things happen.  But what defines these kids and defines this team is how they bounce back from it.  Will they overcome, or not?

Anonymous said…
Great effort and great toughness today in all elements, just not enough to contain a guy who looks like First Team FCS. Tough to tackle that guy for 4 quarters. I loved seeing Allen running so hard and smart behind a very subpar OL.

As of now in 3rd quarter games today...HC and Lafayette may be going down to defeat. Could it possibly be Lehigh Lafayette for all the PL marbles - if HC loses next week to G-Town?
3:11 PM

Anonymous said…
oh well, HC is going to win in the Bronx. The Rivalry awaits. Lehigh can still ruin any Pard chance of a title if HC falters next week...
4:35 PM

Anonymous said…
Proud of the effort today and very optimistic about Beesmer as our starter remainder of this year and next season. Strong arm and decent mobility, just inexperienced. Defense played with heart and almost was enough.
9:04 PM

Anonymous said…
Agree. And a win next week will be extra meaningful on so many levels going into 2020. Going to watch every minute of that one.. I am so, so happy that Coach Gilmore has totally, 100% turned around the defense this year into a tough, prideful unit.

Anonymous said…
All this being said, Holy Cross fully deserves the PL Title. They are an explosive, athletic team, a step ahead of everyone this year. It would be a sin if they somehow slip up vs. G-Town, and the Pards pull one out against LU...we just cannot let that happen. (Pards own the only PL win over HC and would win the tiebreaker).
11:50 PM

Antonio Lionader said…
You started looking for a real college literature lesson homework help online because of some extraordinary sophisticated assignment that is due soon and you have no clue about a way to approach to its completion.
Let’s first be clear on one thing: you buy at College Homework Help and we give great homework help. College demands it. And you don’t have to be involved if you are uninclined to do so. You can give us the assignment, explain what you will, and leave us to complete the work. However, our methodology is set up so that you can reap enormous benefits from the process itself. From the day you complete the buying process, you will get to choose your professional writer, and e-mail communication begins immediately.

Toni Myran said…
With assignments piling up during the academic right throughout the year it makes sense to start looking for the answer to that question Who can do my homework for me? as soon as possible. As the saying goes, the best time was yesterday, the second best time is now! So once you’ve decided to take the plunge and go looking for some professional academic help with your homework there are quite a few things you should know before you choose the service you need.

If you are fed up with so many assignments or you have tried to determine what to write, but you cannot find anything, then you do not need to worry. A student needs to have free time to have fun and relax. The homework online services for sale is an ideal solution for any student who is overwhelmed or cannot find time for his or her assignments. Expert writers Do my homework for me write assignments excellently in order to help students to succeed in their careers. The service is offered at an affordable price and it is available whenever you need it.

Anonymous said…
Waiting for the faux rivalry write up.
6:44 PM

Anonymous said…
The most played rivalry in the nation cannot be faux, under any definition. This year it is meaningful. Lafayette has a tiny chance of the Patriot League autobid, and we have to stop that insane proposition.