Lehigh Inks 12 On Early Signing Day, And Here Are My Thoughts 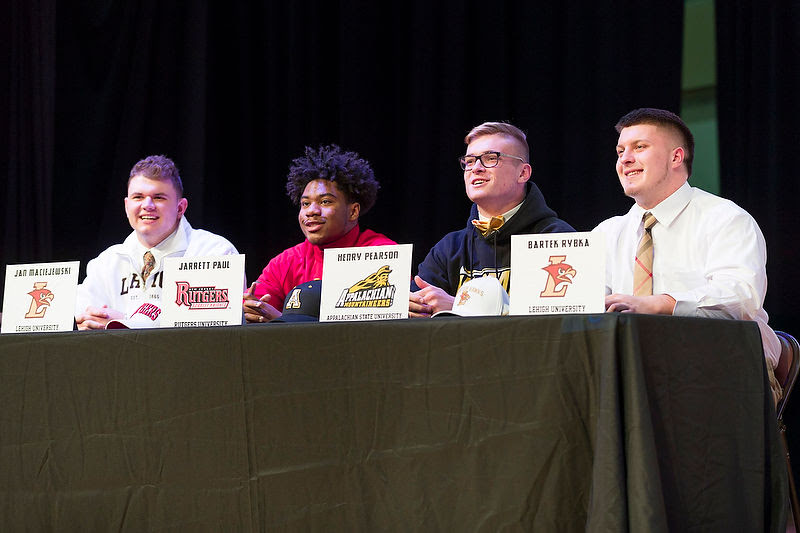 Yesterday, Lehigh announced the signing of 12 football student-athletes to National Letters of Intent, or NLI's.

Nobody knew exactly what was going to happen in regards to student-athletes, whether they would sign national letters of intent, or not.

What ended up happening was a floodgate of signings, not just at Lehigh but across college football.

I entered Wednesday thinking that a good target for announced Lehigh football recruits was six, based on little other than my history of observing this stuff.  As it stood, I saw schools like Delaware announcing six football recruits signed before breakfast, and Lehigh had inked their sixth recruit well before I had my leftover General Tso's chicken for lunch.

It wasn't just amongst Patriot League or FCS schools, either.  Penn State signed 21 recruits, including one of the top athletes of the Lehigh Valley, who flipped to the Nittany Lions from UCLA.  Some estimates speculate that when the dust settles on this early signing period, over half of eligible football recruits will have signed with their schools.

For the student-athletes and their families, committing during this time offers some great benefits.  It binds the schools' scholarship offers to the student-athletes, and can pull the plug on some of the signing-day circuses that have sprung up in years past.  It also moves much of the pomp and circumstance to the end of the second marking period, an academic lull where tests are complete and there is time to have a celebratory signing ceremony in the library.

Overall, early signing day seems to be a major win for the student-athletes, who get to commit earlier, get to worry less, and get to experience the celebration for their collegiate signings that is becoming more and more the norm at a time when it suits them better.  Whether you love the process or hate it, this way of doing it seems to have a lot of benefits, and it's here to stay.

My thoughts on Lehigh's initial signings:

1.  OL and DL are a huge focus.  My initial joking around about this class involved Lehigh's dining services and Waffle House - as in, will these two institutions of calories be able to provide enough material for caloric intake to feed the three OL and two DL that were included in this class of twelve, including one incoming recruit that already tips the scales at over 300 lbs.  I identified OL and DL as two great need areas for this team, and even though the class isn't complete yet, these five guys are an excellent start.

"What's really most important is the positions that we have yielded," head coach Andy Coen said. "We have a big group of offensive and defensive linemen and we're very excited about that because we'll always need to have a lot of big guys in the program."

2.  Surprised only three defensive players signed early.  Though Lehigh's main reputation is one of an offensive powerhouse, it is clear that improvement is needed this offseason on defense, which I thought might manifest itself in recruiting a bunch of defensive players.  With the caveat that this clearly isn't the end of Lehigh's recruit class for the class of 2022, I'd definitely like to see more defensive players to challenge for spots in 2018 and beyond.

3. Really excited about the Paramus Catholic recruits.  I'm excited about the entire group coming in - and there will be more about them as we go - but two guys that really made me grin ear to ear in Lehigh's recruiting were the inclusion of OL Jan Macijewski and DL Bartek Rybka in Lehigh's incoming class.  Originally a basketball recruit, Macijewski, who looks like he could project at guard or tackle, according to coach Coen, and  has a lot of potential to work his way into Lehigh's offensive line next year.

From NJ.com: "He's got real good size [6-4, 300 pounds]," head coach Dan Sabella said. "And he's a really intelligent player. He's going to pick up their schemes immediately.  He's still growing into his body, still figuring it all out a little bit. He's very raw, but once gets a little more seasoned, I think he'll be able to get on the field there."

Rybka's highlight reel shows a defensive lineman with a non-stop motor who, according to the recruiting websites, had FBS offers from Army and Rutgers, as well as other FBS and Ivy League schools but chose Lehigh instead.

From NJ.com: "What kind of player is Lehigh getting in Bartek Rybka?  The passionate three-year starting Paramus Catholic defensive lineman broke his wrist in the Paladins' season finale against St. Peter's Prep in the state semifinals -- in the first quarter -- yet finished the game without telling anybody.

"He's a guy who has played a lot of football here," Sabella said of Rybka. "He loves to complete and I think other schools, bigger schools, maybe shied away only because of his height because other than that, there are no deficiencies in his game. He's emotional, he's got a motor going 100 miles per hour all the time and he's a high-energy guy with a lot of passion and a lot of intensity."

"This past season, Rybka made 73 tackles (10.5 for a loss) with three sacks and, in 2016, was Paramus Catholic's leading tackler (98) as a junior on a team that won the Non-Public Group 4 state championship."

"Rybka is a fiery, tough, tough guy," Andy said.  "and he's one of the top players in the state of New Jersey."

Anonymous said…
Wouldn't it be nice to introduce this dunce to a razor? Wonder who told him he looks good with that ridiculous goatee?
2:40 PM

van said…
I donno, I look good in a goatee, so why not Andy?

Anonymous said…
The goatee is the least of his problems.
12:41 PM

Anonymous said…
He looks homeless which come to think of it he just might be very soon.
5:40 PM

Anonymous said…
why would a homeless person? Please explain.
10:43 PM