The Rivalry: Enjoy The Best Part Of Going to Lehigh Or Lafayette 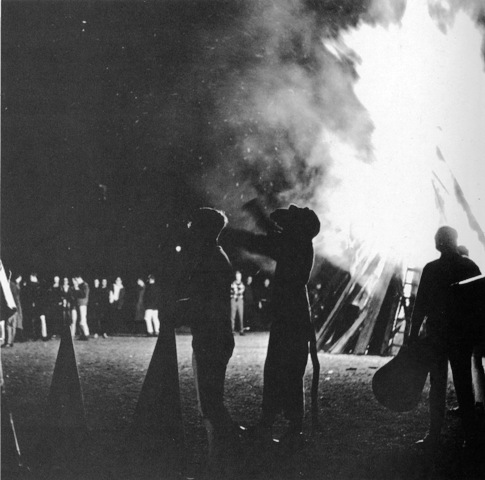 It's something you ought to see once in your life, if you can, because it's unique, it exudes its own special energy, and it has an emotion and spectacle that many bowl games would dream to have.

It's been waged every year, with only one interruption since 1884.

And the two schools, in competition in pretty much everything since the founding of Lafayette (1826) and Lehigh (1865), eventually coalesced around football as the main driver of The Rivalry between them.

I've spent a good portion of my adult life being around The Rivalry.  I've studied it, blogged about it, and even written a book about it.

And even if you're not a hardcore fan of Lehigh or Lafayette, it's worth coming to experience the craziness if you can.

There are other intense Rivalries.  There are other big regular-season games that have lots at stake.  But The Rivalry, the most-played Rivalry in college football, has all the energy yet also has a level in intimacy that is unmatched by any other game.

You can go to the Iron Bowl and watch a game between Alabama and Auburn in the nosebleeds.  You can go into the cavernous Yale Bowl and watch Harvard play Yale.  You can experience the craziness when Michigan plays Ohio State.  But a game versus Lehigh and Lafayette packs the fans into an intimate setting that has all the energy and intensity yet is much more accessible and, at times, feels much more organic than those other Rivalries.

Once you've gone to a Rivalry game, or gone on the campuses in the run-up to the game, you experience the energy.

The ideal is to visit the campuses during Rivalry week; to hear the Marching 97 blasting their way through campus with the Lehigh fight song; to join the Lafayette alumni at their Pub Night; to take in a bed race or a bonfire, to take part on more than just a tailgate or a game but to take in the entire experience.

Even for those not immersed in the Xs and Os of the game itself, the energy starts in the first classes of the week and eventually takes over the campuess.  It comes near one of the pressure points of the semester, the end of classes right before Thanksgiving break, and the virtual end of what generally is a tough, challenging semester in school.

Students don't come to Lafayette and Lehigh to coast; they go to challenge themselves and to work hard in the classroom.  Attending one of these schools is not easy.  Most Monday through Friday's consist of all-nighters, intense study, and stress.

But during Lehigh/Lafayette week, the pressure lifts a little, a chance to finally cut loose and to spend the week partying.

At Lehigh, events start to take over the campus - the traditional bed races, the Turkey Trot.  Classes take place, but they're interrupted by the Marching 97 barging in and playing the Lehigh fight song.  Casual drinking during the week, often impractical due to the rigors of the academic schedules, enters the scene.

Alumni and booster groups sponsor luncheons.  The regular ebb and flow of the universities are interrupted with things like "Smack The Lehigh Car" at Lafayette, and a slew of other activities that are planned or unplanned.

Some of the best times I had as an undergrad was spent during this week, from my time as a freshman, trying to fumble through and figure out what it is about, to my senior year, sitting in on Eco 1 to hear the band at 8 AM with a refreshing beverage in hand - even though I had already passed Eco 1 the year before. 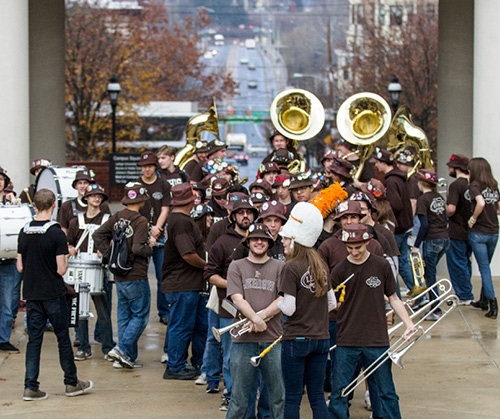 It's always been crazy, and has always been nuts.  The rituals and the activities have changed over the years, but it's also united the student bodies and alumni and allowed them to put any other divisions aside, just for a weekend, and cut loose.

The times of the pajama parade to Moravian are past, as are the "smokers", a form of pep rally where Lafayette (and Lehigh) students would smoke tobacco and cigars and hear speeches and watch basketball to psych themselves up for the big game on Saturday.

The times of the postgame riot are gone too, replaced simply by the current tradition of storming the field after your team wins.  Luther Campbell might be too proud of his fans storming the field after the U wins a football game, but not at Lehigh or Lafayette - to me, it's the perfect ending for either team, to be surrounded by your fans and celebrating.

To the students of Lehigh and Lafayette - I'd suggest just taking a minute during this week, and breathing it all in.  Participate in one of the events that are going on - a bed race, the bonfire, anything.  Don't have any regrets, for I can guarantee that where I sit, I wish I had been a part of just one more thing on campus as a part of my Rivalry experience.  You can always go back as an alumnus or alumna the Saturday of the game; getting back on a Wednesday or a Thursday night to see a bed race, not nearly as easy.

And take heart that whenever you do go to a bonfire or a bed race, you're following in the footsteps of hundreds of years of Lehigh or Lafayette students, who have experienced many of the same things you have now - felt the same unique energy in the air, felt the same tension broken, spent time walking on the same hill, the same mountain.  The activities have changed - some have sustained, some have died out, and some have been reborn - but the spirit of the students has not.

I went to a lot of classes at Lehigh, some of which I remember.  I studied a lot, spent a lot of time in the library and computer labs, activities that I remember more in theory than specifics.  But I can walk through what I did in the week running up to each Lehigh/Lafayette game to this day.  I know how I got to each game, what I ate and drank, what happened in each game and who I was with.  I suspect the current students who attend the game will feel the same way.  The other stuff was important, but the Rivalry made me feel like I was alive and a part of the school.  Lehigh wasn't a glorified study hall after that, a place to simply learn a trade - it was something more.

Being a part of this thing has been, and continues to be, one of the best things in my life.  If you're a student, get caught up in the fever.  For me, it continues to be worth it.

Helen Richardson '77 said…
I started going to the Bonfire with my parents at age four, followed by a ride up the Hill to see the fraternity displays. As a student, my friends and I "guarded the bonfire," but mostly guarded our liquor bottles and properly disposed of the empties. The band in classes, the pregame parties and the atmosphere of cheerful bonhomie stay with me decades later.
7:34 PM