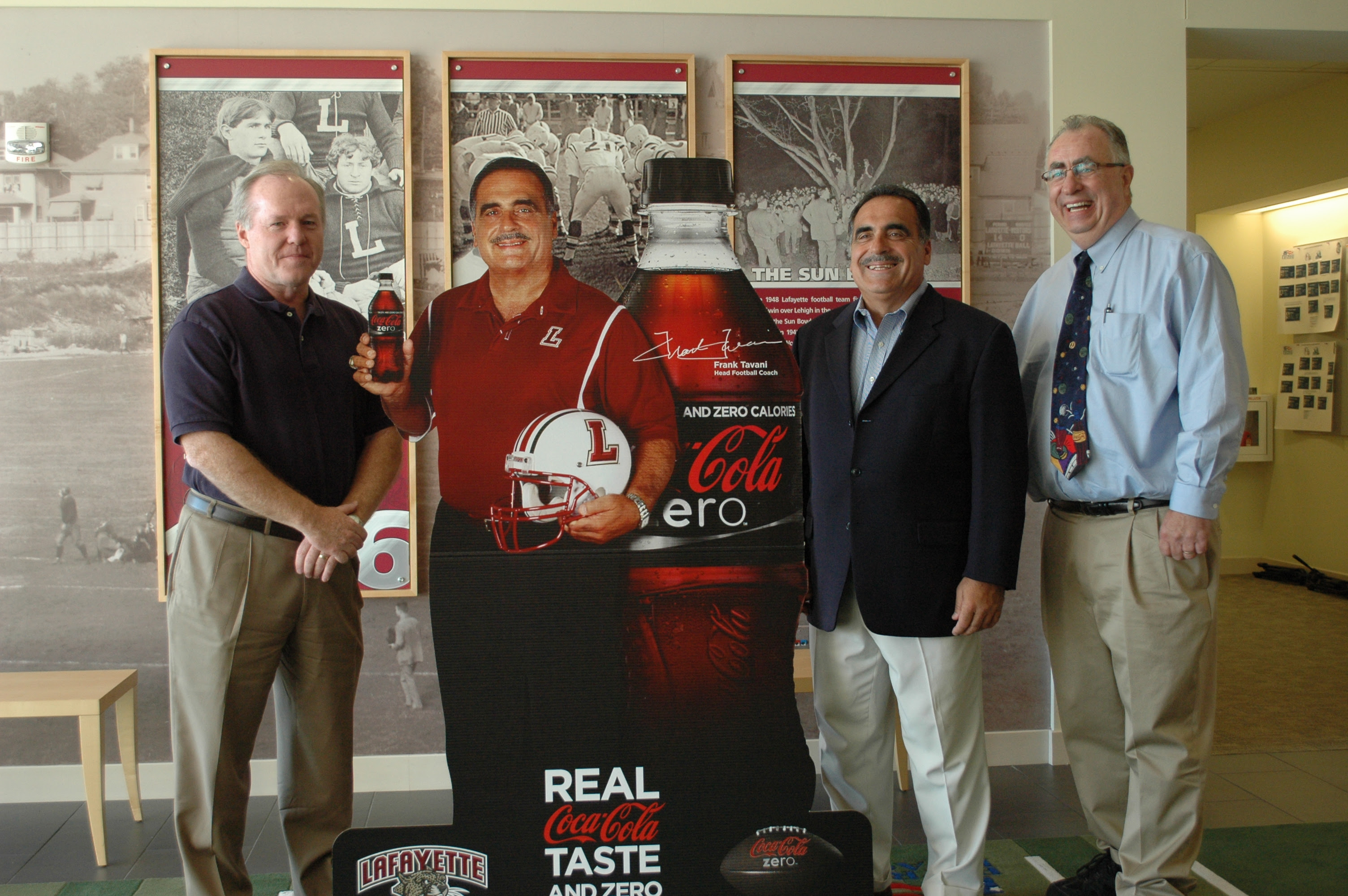 Frank Tavani always made sure the Patsies were celebrated in downtown Easton.

Perhaps it was the Bourger Field House needing an event to host in February when the men's wrestling team was out of town, or that field hockey practice was finishing up - the shindigs that Bourger fielded back in those days were great.

All that steak, not overcooked, was barbecued outside, filling the Eastonian air with charred meats usually only present during Lafayette/Lehigh week.  Many students would come up - giving up their vegan diets, maybe just this one time - to eat beautiful steak sandwiches, and to sip delicious Coke under huge cardboard cutouts of their beloved head coach.

Today, Lafayette has a new head football coach, and so far there's no Coke billboards with head coach John Garrett on them.  And there was no smell of steak as the Committee got the folder filled with the printouts of Lafayette's Patsy Ratings class.

The Spotted Cats arguably had one of the toughest recruiting jobs in the country last year.  Under new head coach John Garrett, who was hired after longtime Frank Tavani retired last December, Lafayette's staff for a very long stretch not only didn't have their lead guy in place, they had to close the deal on a bunch of recruits as Garrett was putting pictures of his playing days at Princeton on his new bookshelf in his office.

You'd have given the Eastonians a pass if they had a ho-hum recruiting class, based on the circumstances, but what happened instead was that the Lafayette coaching staff amassed the largest "quality point" haul of any class in the Patsy Ratings this year.  Under normal circumstances that would be great for the Leopards - in the context of this particular offseason, it's downright remarkable.

The Committee didn't really have so much as a "bad" thing to say about the Leopards recruiting class insofar that it was difficult to figure out what their "needs" were because, frankly, their needs were many after a tough couple of seasons.  While the Spotted Ones did meet their first two "need areas" extremely well, their third "need area", surprisingly, wasn't - which will be explained later.

QUALITY = 39.   As mentioned, the Leopards "quality point" total was the highest of any Patriot League teams' recruiting class this season.  11 out of 20 recruits at least had a page on the recruiting sites, and five of them had star ratings.

DISTRIBUTION = 8.  All bases were covered with the exception of tight end.

SPEED = 0.   For whatever reason, no "official" speed information was present on the officially considered recruiting profiles, so zero points here.

TRIGGER = 8.   Lafayette had an amazing haul of "Trigger Points" thanks to the fact that the Maroon and White had four recruited quarterbacks, two of them rated two stars.  Four points for "recruiting website recognition" plus four points (one for each star) equals eight total points.

JUMBO = 5.  Out of 7 recruits, five of them tipped the scales enough to earn jumbo points.

QB = 5 (of 5).   Picture that your team needs a quarterback.  Then picture a recruiting class with four quarterbacks to choose from, two of them star-rated.  When scholars dig up the Committee's printouts of what the Patsy Ratings look for in terms of a "perfect meeting of need", Lafayette's 2017 quarterback class might be the example to which others might be measured.

OL = 4 (of 4).   Perhaps next on the "meeting of need" prototypical examples might be Lafayette's meeting of needs in the are of offensive line in 2017.  5 recruits (critical for replenishing depth), 4 recognized by the recruiting sites, and one of them a two star recruit - and all of them tipping the scales over the "Jumbo" point threshold.  Another slam dunk, needs-wise....

DL = 0 (of 3).   ...which leads us to the disappointment of the third need area.  In the area of the Patsies, transfers are not included in the assessment, so the official look at the class sees two recruits, neither recognized by the recruiting services - essentially, "need not met".  However, this ignores the presence of a hefty defensive line from Syracuse - but the Patsy Ratings have never considered transfer students who have matriculated at other two-year or four-year schools, so he doesn't count.  The transfer may come in and start, and be all-Patriot League, but for the purpose of the Patsies, he doesn't exist.

COMMITTEE ADJUSTMENT:  The dreaded "Committee Adjustment" came about a season long ago when a particular Georgetown class had six quarterbacks, with several sporting star ratings.  The head Committee person then, Carney, decided that the star ratings didn't represent the class properly, because you can only start one quarterback, not six, no matter how good they are.

While this season's Lafayette class wasn't as unbalanced as that Hoya class long ago, it does have the same problem: you can only start one quarterback, not four.  It's a textbook case for a slight downward adjustment, and the Committee decided on a slight negative adjustment to reflect that.