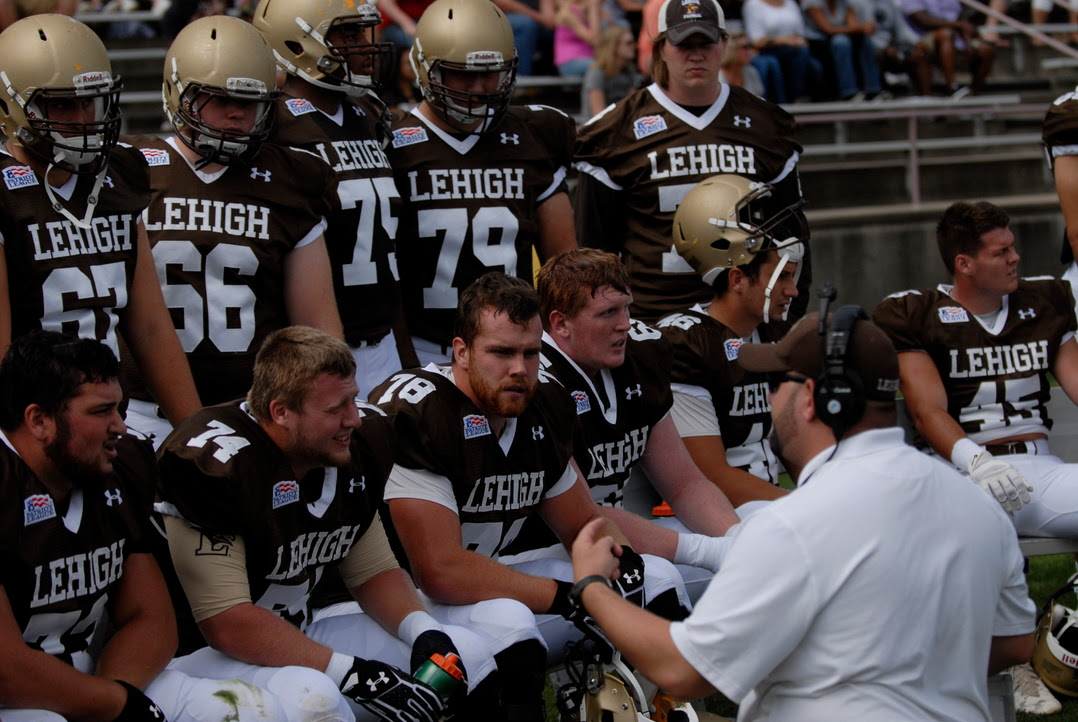 When the league posted their preseason all-Patriot League team, unsurprisingly there were seven Lehigh football players on it, one of whom was senior OL Zach Duffy.

No congratulations are needed since we haven't accomplished a single thing yet. Sorry if that sounds sour. We appreciate the recognition.
— Zachary John Duffy (@ZachDuffy72) July 27, 2017

In the span of a tweet, Zach established immediately that re-reading one's press clippings from the 2016 season is not something this 2017 edition of the Lehigh football team will be doing.  They'll be judged on accomplishments, not preseason all-Conference teams.


Later on, when head coach Andy Coen would come on the call, he'd echo the same sentiments Zach tweeted out earlier, differently.

Like Zach, he had seen the Patriot League preseason all-Conference team and seen the release which had Lehigh picked to finish 1st in the league.

"Football is in the air, for sure," Andy said on the call. "We came off a great season last year, and we're honored that we're being recognized as a top team in this league, but everybody knows that it doesn't matter at this point in time.  What matters is [where you are] at the end."

Lehigh got the top number of votes in the preseason poll, with votes by athletic directors and sports information directors, with 70.  Second place was Fordham with 61, while Lafayette and Georgetown were tied for last with 17 points each.

"It's got to be a one-day-at-a-time mentality," coach Coen said.  "What we did last year, none of that stuff matters.  The only thing that matters is how we play every day, and how we get better every day we practice.  We've got to get better every time the ball is snapped."

Zach added to this in the phone call as well.

"The biggest struggle, I think, a championship team has to deal with is not letting expectations get in the locker room, and how the season is supposed to go," he said.  "I think we'd done a good job of keeping people focused on their daily job, what is expected of them on a daily basis from our coaches  [like OL coach Andy Marino]. If you want to be very good at something, and if you want to win championships, you need to be consistent in everything that you do."

With the preseason first team list on offense boasted five Mountain Hawks, including two offensive linemen that are Lehigh's bookend tackle combination of seniors Zach Duffy and Tim O'Hara, Andy talked about the foundation of the Mountain Hawks' high-powered offense: the offensive line.

"I'm really thrilled that we were able to get Duffy back, a 5th year guy, and senior C Brandon Short," he said on the call.  One thing that we always try to accomplish every year is leadership development, we want guys to develop not only as football players but as real leaders that can grab the bull by the horns and create positive things.  That's probably the most important thing that those two guys are going to give to our football program.  They are two outstanding players,  and O'Hara last year was second team all-Patriot League guy [as well].   As he's growing into his senior season he's going to move right in to where [Brandon and Zach] are."

Coen, who was a former offensive lineman in college and offensive line coach before taking over at Lehigh, talked more about the importance of having a good offensive line, and also mentioned that he felt like this group had to be the potential to be the strongest group that he's seen at Lehigh.

"I know how important this is for those five guys," Andy continued, "every time the ball is snapped that they're in the right place, the right time, and making sure that their teammates are doing the same thing.  I think everything has to start on the line of scrimmage, and I'm really excited about the five guys that are going to start this year for us."

Through an email, Brandon Short told me that the numbers of student-athletes who worked out in Bethlehem over the summer were the biggest that he could remember.

"Workouts this summer have been solid," he told me.  "The younger lineman have been up here this summer and pretty much all of the offensive line have been up here as well. Zach and myself bring a couple guys over a few nights a week and go over some of the basics -  calls, fronts, and techniques are mainly what we go over so that when camp comes, it's not as big of a learning curve for them because they've been exposed to it."

Short and Duffy and the other offensive linemen have been doing a lot together as a unit this summer, including things like wing nights and going out and playing miniature golf as a unit.

"Bonding and being up here with the team is irreplaceable and is something that can't be achieved when training at home," Short said.

Aside from bringing the unit together and getting ready for the upcoming season, the home opened on September 2nd - a Top 25 FCS clash between Lehigh and Villanova - certainly helps everyone stay focused, Duffy said on the call.

"I think it's going to be a great gauge for where we're at, especially in Week One," Zach said.  "Last year, we played them fairly early in the season, and it was a really close game, and we kind of knew from there that we had something good going.  That's something we're going to be harping on this year as well, preparing for them as best as we can and being ready to play them, as prepared as possible.  They're going to be a great team, and we're really excited about it."

The season is a little more than thirty days away, and most Lehigh football fans aren't totally in tune with the upcoming season.  Fortunately for Lehigh fans, the players in Bethlehem aren't sitting around patting each other on the back celebrating their preseason all-conference team selections.  They're already much more focused on the challenge of playing the Top 25 team coming to Murray Goodman on September 2nd.