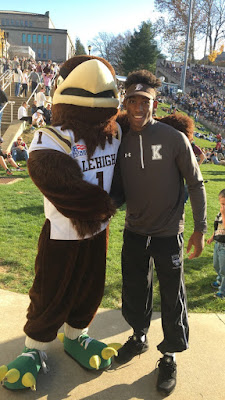 In the run-up to signing day, I caught up with a few of the new recruits to ask them about their recruiting stories and their high school football career.

Today our subject is DB Divine Buckrham, who competed at The Kiski School, which is based just outside of Pittsburgh, PA.

The Kiski School is an all boys, small, private school with an enrollment of 210 students.

Despite its small size, it has a long, storied history of football, too.

"From the early 1950's to the present, it is well documented that Kiski has fielded teams deep in football lore and history," Kiski's team website says. "Many of the country's greatest football players of the time started their careers at Kiski."


LFN:  You list as your hometown Queens, NY.  How does a guy from Queens end up in central PA, and how did you become aware of Lehigh?

DB: Well, I was blessed with the opportunity to attend one of the most prestigious, all-male boarding schools in the country. To get there, I went through a program in New York called the Boys Club of New York, which allowed me to be placed at Kiski Prep for nearly 100% financial aid. From there, it’s been a grind for four years straight, whether it’s in the classroom, on the field, or in the campus community.

Coach [Craig] Sutyak came in to speak with me in the spring of my junior year, and since then I’ve only shared good vibes with the all the Lehigh coaches I’ve talked to.  Amongst all the other school representatives I had spoken to, I could tell that one, Lehigh, had a little more flash compared to the others, mainly because of Coach Sutyak’s specific enthusiasm for recruiting.

DB: Yes, I was in contact with almost every Patriot League school, including Lehigh, Holy Cross, Fordham, and Bucknell. All of the following came to Kiski to speak with me throughout my junior year. Honestly, I think the repetition of high academics at my school attracted Patriot Leagues compared to other schools from various divisions.

LFN: You played WR, RB, and DB at different times Kiski.  You also seem to have returned kicks as well.  How many ways did you score touchdowns at Kiski, and which one was your favorite?

DB: Being a primary defensive player for three-plus seasons at Kiski was always a challenge, mainly because it takes a physically-brutal defense to compete against explosive offenses in our division. With that said, I always felt that I could be very effective on the offensive side of the ball too against opposing defenses. Unfortunately, I only got to play RB for 3 games in my high school career, but it was definitely some of the most memorable moments in my career. It’s hard to show people your true athleticism when playing only cornerback when opposing quarterbacks won’t even look your way, but having a chance to play running back this year allowed me to make a noticeable impact in our games when my defensive contributions were limited. Some wide receiver and returning duties were also fun because I still had chances to make raise my personal player stock by showing I could break tackles, run dudes over, and simply make plays with the ball in my hand. At any rate, playing RB made my senior season just that much more memorable amongst all the other opportunities I experienced.

LFN: Who's the most influential person in your life?

DB: I get asked this question a lot, and It’s always so hard to answer. There are a couple people who influence me, from CB Deion Sanders and his playing abilities, to my older brother and his leadership. Through it all, however, my mom has been in my life in more ways than I can even imagine, and I've always saw her as the kind of person I wanted to be. She is my backbone. The hardest working person I know and I am one who values hard work so she's the one.

LFN: Finally, it looks like you went to see Lehigh/Lafayette this year (based on your Twitter timeline).  How was that for you?  Did it have any bearing on whether you wanted to come to Lehigh?

DB: That game had to be the most insane game I've ever watched. Everything about it, from the energy of the crowd, to ROV Laquan Lambert throwing players around the field left and right, everything about the game was perfect. To be honest, I was pretty upset that I couldn't play in it myself.  All of my games interfered with Lehigh’s this year, so it was good to finally watch the Hawks finally play in action, in the biggest game of the season.