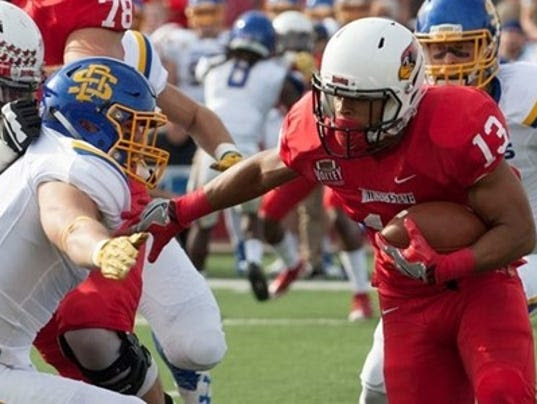 I'm pretty proud of myself for not falling into the trap of South Dakota State.

Many people, after the Jackrabbits' huge win over North Dakota State, vaulted them to the Top 5 of their polls, but I know better.  The craziness of the Missouri Valley I thought would eventually catch up with them, so I had only reluctantly put them at No. 10.

Their loss to 3-5 Illinois State, taken in isolation, was a shocker - but perhaps not completely shocking, though, considering the Missouri Valley has not one but two teams that have beaten Power Five Teams and also have five losses.

In fact, there are three Missouri Valley teams - Illinois State, South Dakota and Northern Iowa - that can plausibly say, if they get to 6-5, they have a legitimate shot at making the playoffs as an at-large team, thanks to perceived quality wins.

* I did some reshuffling of my Top 10, most notably downgrading James Madison a bit and upgrading North Dakota State a bit.  My beef with the Dukes isn't so much that they crushed Rhode Island 84-7, but more about what that game says about James Madison's overall schedule.  Namely: are they worthy of being ranked above North Dakota State, who lost exactly one game on the final play with, objectively, a much harder schedule?  Morehead State, Central Connecticut State and Rhode Island are teams most of FCS could beat.


* Of course, this week they go on the road to play Richmond, a game that feels like it's the game of the year in the CAA.  Unlike the Dukes, the Spiders have played and beaten Albany and Villanova this year - and, not to mention, a "small" win against an FBS team, Virginia.  I don't think it's too much to say that the winner of this game might be looking at a seed, and the loser may need to turn things around fast to avoid the FCS playoff bubble.


Put another one in the win column for the Spiders! #OneRichmond pic.twitter.com/ikw5Td8OB9
— Richmond Football (@SpiderFootball) October 22, 2016


* Let's make this Top 25 a CAA trifecta by talking about a team I think should be getting more Top 25 consideration, Maine.  At 5-3, they don't look that fancy, unless you remember how they came within a whisker of upsetting UConn opening weekend, and lost to a second FBS team (Toledo) and another good CAA team (James Madison).  They don't really have a signature win, but their schedule has been tough and if they can run the table vs. Villanova, Stony Brook and New Hampshire, they'll be a no-doubt-about-it playoff team and maybe even co-CAA champs if things break right.

* The reason for the CAA obsession at the moment may be that Lehigh seems likely they will be facing off against a team that is situated East of them, which most likely at this point means New Hampshire, Maine, or Stony Brook.  Lehigh will need to beat Bucknell to guarantee a postseason berth, and with St, Francis (PA) the odds-on favorite to win the NEC, it seems logical.  CSJ's picks-plus projected FCS bracket has Lehigh playing New Hampshire.