Lehigh 58 Fordham 37 Postgame Commentary: Coming Out Next Week "On Fire" 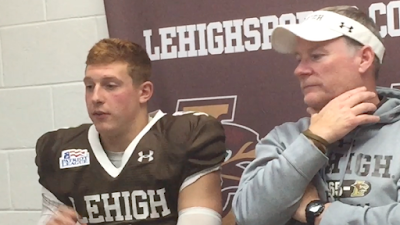 Lehigh football post-game press conferences don't get much more relaxed than the one that happened last weekend.

You can hardly blame head coach Andy Coen, senior QB Nick Shafnisky, junior DE Tyler Cavenas and sophomore RB Dominick Bragalone for feeling that way, after jumping to a 13-0 lead right out of the gates and piling up an incredible 57-9 lead against their opponents last weekend before calling off the dogs.

It led to a familiar feeling in the post-game: talk of how the offense is clicking so well, how the defense keeps coming up big.  There were plenty of accolades to go around.

But when one media member tried to lightly broach the subject to Lafayette, the always-loquacious Shafnisky quickly steered the conversation back to next week's game.

That's because Shafnisky, perhaps more than anybody, feels the importance of next week's game vs. Bucknell.

"For us to be in this position, it's all a credit to us and our coaches. We put ourselves in this position, we earned it. But we didn't earn anything yet. Next week, when you ask that question again, hopefully I'll be the happiest man."

Some were calling the Fordham/Lehigh clash a form of Patriot League Championship Game, but this Mountain Hawk team essentially made this "championship" over by halftime.

Lehigh had six offensive drives in the first half; all six resulted in points.  Lehigh's defense held Fordham to one touchdown drive and one successful field goal attempt, and, for good measure forced a fumble from the usually sure-handed RB Chase Edmonds that was rapidly turned into a Leigh touchdown.

It meant there was a routine-ness to the post game - even though Shafnisky, who hadn't started in several weeks, was there, and junior DE Tyler Cavenas, who had his best game of the year, an 8 tackle, 3 sack game, was too.

"He picked up where he left off before his hiatus," coach Coen said.  "He not only performed well, but he provided great leadership for the guys."

It's amazing how each week, a new person seems to step up and not only get a Lehigh win, but a Leigh win that was well over before the 3rd quarter is over.

One week, we're talking about junior WR Gatlin Casey and junior WR Troy Pelletier, how they've busted through for another 100 yard receiving day.

The next week, we're talking about an almost-unheard-of 6 rushing touchdowns in one game.

It's also amazing how the scoring almost becomes routine after a while.

Fordham scores a touchdown?  On the very next series, senior WR Derek Knott caught a perfect pass from Shafnisky over Fordham's safety, and then turned on the jets, never to be caught, for an 86 yard touchdown grab.

Shafnisky goes out after being poked in the eye?  Sophomore QB Brad Mayes comes in for a series, and tosses a highlight-reel pass to Casey in the end zone, making it seven straight games that Casey has caught at least one touchdown pass.

In any other game those offensive plays are seen as game-breakers, huge momentum swings that determine the course of games.  They are great plays and should be recognized as such, but it's a testament to this Lehigh team that these extraordinary plays almost become expected, just a normal part of the flow of a Lehigh game.

You know you're doing a lot right when your punter, sophomore PK Ed Mish, becomes special teams player of the week for the third straight week and he didn't even punt once.

At the same time, you don't get the feeling that this team has to guard against complacency, either.

The 2015 football class was the first graduating class in a long time that didn't have a championship ring.  The Lehigh football program took enormous pride in the fact that every graduating class had at least one ring, and that aspect of the program finally fell last year, ten yards short of its goal at Colgate.

I'm struck overall by the focus of this team, and the lack of complacency.  There's simultaneously a sense of amazement at what they've achieved thus far, yet there's also a keen sense that they're not there yet.

Shaf was asked by Greg Joyce of Lehigh Valley Live if he ever looked up at the scoreboard during last week's game.  "I kind of did, yeah," he grinned. "Then someone yelled it, 'Stay focused.' I was like, 'Yeah, let's put up 70.'  That was my mindset."

It's little things like that that make me think that this team's focus is in the right place - there seems to be that sense of urgency that nothing is settled yet.

This Saturday is military appreciation day at Murray Goodman stadium, but it's also going to be Senior Day, potentially the last time seniors like Nick Shafnisky, Derek Knott, senior OL Brandon Short and a host of others will be taking the field with their football uniforms on.

This senior class has seen a lot of disappointment as football players - lots of almost-shots at glory, but no rings.

In 2013, they had a chance at a share of a Patriot League title, but lost the opportunity on the final game of the season, losing 50-28 to Lafayette.

In 2014, things fell apart, ending with the biggest disappointment of all, the loss to Lafayette in the 150th meeting of the Rivalry at Yankee Stadium.

Last year, it was ten yards short in the comeback attempt at Colgate.

I think these almosts are a big part of the fuel that has people like Shaf stay "focused" when he's tempted to scoreboard-watch.  Shafnisky was a part of all of these moments, in one way or another, and more than anybody on the field I think he just wants that championship ring more than anyone else on that field.

There were hints of this, too, in a Brown And White interview of Shaf that came out late last week.

When asked what he was trying to pass on to Brad, he said, "Pretty much how to take over a team – literally take it over. Not where you can just boss anyone around like a dictatorship, but spread the love to everyone on and off the field. And show him that you’re with everyone there, that everyone’s your best friend. But sometimes when someone does something they’re not supposed to do you gotta really be able to lay on them, but not in a way that breaks your relationship."

Shaf has always been like this - spreading the accolades around, giving props to offense, his offensive line, defense, special teams in the post-game press conferences, too.

Football is a team game, of course, and it's not all one player, but you get the sense that Shaf's sense of urgency informs every player on this team.

"For now, we just have to come out on fire and then have our bye week next," Shafnisky said.  "So, we have to do anything we can and put our bodies on the line to make sure we get that win."

You get the feeling that he isn't going to let anyone rest versus Bucknell next week - not until the ring is assured.

"It's an awesome feeling," Shaf said.  "[But] no one on the team has a ring, some coaches, too.  So we haven't earned anything yet."