100 Years Ago, Lehigh and Lafayette Squared Off For The 50th Time 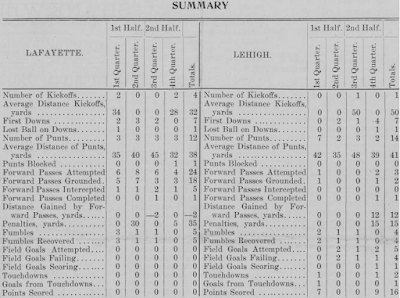 "A special feature of Saturday's game will be the press service for a special wire from the sidelines to the press box with will provide good service to newspaper men covering the game," The Brown and White said in regards to the 50th meeting between Lehigh and Lafayette that was to take place on Saturday, November 25th, 1916.

"With the co-operation of the Western Union Company, this scheme has been worked out: The details of various plays will be given to an operator who will send them from a table placed on the sidelines over the wire to the press box.  The operator in the stand will receive them and they will be called to the press representative through a megaphone.  One Lafayette and one Lehigh man will give the plays to the field operator - the man who carries the ball, the man who makes the tackle, fumbles, penalties, and every detail of the game will go over the wire.  All of this will be done so quickly that the press will have every play complete before the next play is begun."

"This service is not surpassed on any field in the country," The Lafayette also noted.  "As far as is known, only one other, Franklin Field, uses this system.  By far the majority let the newspaper men do the best they can by themselves."

In the 50th game of The Rivalry, technology was then a big part of the story.  The reporters in the press box, including both student newspapers, would be one of the rare few that would get a play-by-play call of a college football game.


Played at March Field, Lehigh/Lafayette games had already gotten quite a reputation along the East Coast.  Aside from the Lafayette and Lehigh students and enthusiastic fans of the Brown and White coming from the steel mills of Bethlehem, an additional special train came in from New York City, depositing the passengers at Easton's train station to head up to the College.

In fact, the expected crush of fans coming to Easton had one unfortunate victim: the citizens of Easton.

"No person, barring an alumnus of the college," The Lafayette reported, "was given an opportunity to buy a good seat to for the game.  As a matter of fact only 1,100 seats [out of 15,000] were placed on sale.  They were offered to the public at Odenwelder's drug store at 2 O'Clock [the Wednesday before the game].  They are all $1.50 seats, well down toward the goal posts."

It didn't matter that Lafayette, who was suffering through a tough 2-5-1 season, seemed like they were up against near-insurmountable odds against Lehigh, who, under head coach Tom Keady, had gone 5-2-1 and even had acquitted themselves decently versus some top teams like Yale (a 12-0 loss) and Penn State (a 10-7 defeat).

"Lafayette will, as she did last year, enter the game with a better than fighting chance," The Lafayette said, recalling the 49th game in The Rivalry where a favored Lehigh team got crushed underfoot against an underdog Lafayette team, 35-6.  "If there ever was a time when Lafayette men would not stand behind a team with that chance, we have never heard of it."

As was the custom, both Lehigh and Lafayette held large "smokers", or parties where large quantities of tobacco were consumed while speakers and special attractions engaged the student body to get them ready for an emotional outburst at the game the following day.  In an era when almost all music was live and not pre-recorded, the glee club, banjo club, and even a four round fight provided entertainment.  At Lafayette, a student pep band, one that had been in existence for several years, would provide the soundtrack.

"The memory of last year still rankles in our breasts," Charles 'Bosey' Reiter, Lehigh's athletic director, said at the Lehigh smoker to fire up the faithful.  "Tomorrow, I believe, is the day of retribution."

At Lafayette's smoker, Dr. John Henry MacCracken, president of Lafayette at the time, took a tack of saying how big The Rivalry had become, and what sort of stage was to play out on Saturday.  "There are multitudes of men in every walk of life who know of Lafayette or Lehigh merely because of this annual struggle," he said.

Indeed, starting on late Friday evening, people started pouring into Easton on those special trains to come and take in the game.  "Once up the precipice, one could see nothing but eager football fans swarming in the gates of March Field," The Brown and White reported.  "Every conceivable nook and corner of the field was jammed to its utmost capacity.  It was one of the largest crowds that ever say the great annual struggle, and certainly the largest crowd ever on March Field."

What was pretty remarkable was that the game really was only being played for pride in 1916.  Lafayette, who had had national championship-caliber teams in the recent past, was struggling uncharacteristically.  And Lehigh, who had improved, were still well behind the national powers in the East, which were Colgate, Pittsburgh and Army, all of whom were designated national champions retroactively, with Yale not too far behind those three.

But March Field was still packed, fans there to see a Rivalry that already had a momentum of its own.  No matter what the records, no matter that one, or both teams, were struggling - The most-played Rivalry was news.  It was big-time, as all that Western Union equipment and manpower on the sideline proved.

"Somebody had a basket full of homing pigeons on the sidelines," The Lafayette also reported.  "Whenever Lehigh scored or did something else worthwhile, the owner let loose a bird with a note to carry the news to Bethlehem." 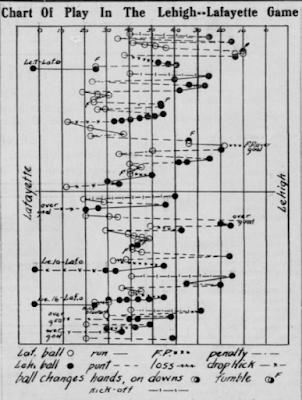 The 50th meeting of The Rivalry wasn't much in terms of drama.  "Weldon dropped on of Brunner's punts, and W. McCarthy coming down the field like a streak to make the tackle scooped up the ball and ran for a touchdown," helpfully noted on The Lafayette's play-by-play of the game with the mark-up "F" and "La. 7- Laf. 0."  Lafayette's forward passing attack, already weakened with an inexperienced team filled with injuries, didn't exactly light up the skies: according to the box score printed in The Brown and White, Lafayette went 1/24 passing with 5 interceptions.

But it showed that The Rivalry almost transcended the competitiveness of the game itself.  It still had the energy that always surrounds The Rivalry.  It still had the crowds - in fact, the biggest-ever crowd up until that time of 15,000 people.  It had the music, the happenings, and it even had a parade through the streets of Easton from Lehigh students, repaying the favor of last year's Lafayette parade through the streets of Bethlehem.

In this day and age, we take for granted all the technology and advances that have come about in an effort to cover and archive the history of sports.  The greatest legacy from the 50th meeting of The Rivalry comes from the simple things that we now take for granted: audio play-by-play, and statistics.