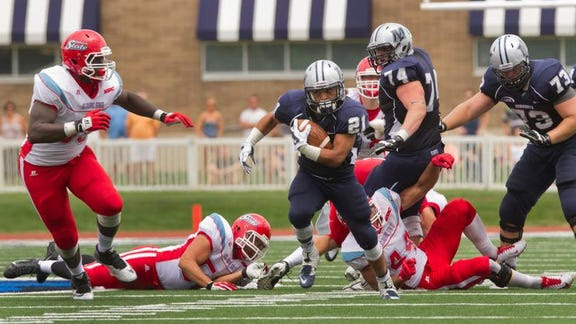 Thanks to Monmouth's game notes and the Asbury Park Press, which is the source of all of this research.

Two years ago, Monmouth beat Lehigh thanks to a spread passing attack that featured a future NFL player, WR Neal Sterling, and a first-year offensive coordinator that was a former QB coach at Yale and a former head coach at UMass, Kevin Morris.

Two years later, Morris' spread offense is back, and will test the Mountain Hawk defense.

Monmouth returns nine starters, including one player that exploded onto the FCS football scene against Lehigh two years ago.

Senior RB Lavon Chaney, filling in for the injured starter, exploded at Murray Goodman stadium that afternoon, racking up 200 all-purpose yards.  In 2015, the speedy 5'9, 190 lb back nearly broke the 1,000 all-purpose yard barrier and probably would have had he not been out one game due to injury.

One of the areas where Chaney absolutely killed Lehigh in 2014 was through bubble screens and short passes.  His 9 receptions and 72 receiving yards during that game were career highs, showing that he's dangerous both rushing to the outside and catching passes.

Last year as a redshirt freshman, dual-threat sophmore QB Cody Williams emerged as the winner of a preseason battle for the starting position.  After a successful first season under his belt, where he completed 58.5 percent of his passes, threw for 1,868 yards and 12 passing touchdowns, this season he was uncontested as the starter.

"I don't think there's any question that he has matured throughout the course of the last year, especially compared to where he was a year ago at this time," said Callahan to The Asbury Park Press. "He has a full season under his belt, an offseason, a spring, a summer, and the result of that is him being so much more ahead of where he was last year. That's going to pay great dividends for us."

Like Shaf, Williams is always a threat to take off with the ball for the first down, which is always an extra headache for defensive coordinators.

Monmouth seems to always grow fantastic receivers on trees, as evidenced by NFL veteran WR Miles Austin and current productive TE Neal Sterling, both of whom competed against Lehigh in their collegiate careers.

This season's candidate for best receiver, senior WR Darren Ambush, is a preseason all-Big South team receiver who led the Hawks in receiving with 614 yards and 4 TDs.  The veteran 5'8, 185 lb speedster will be trouble to cover.

He's not the only solid receiver returning.

Junior WR Reggie White, Jr., isn't related to that Reggie White, but he is the son of the former NFL player named Reggie White who played for the San Diego Chargers and played in Super Bowl XXIX.  Junior White had 432 yards returning and 5 TDs, and will certainly test the Lehigh secondary along with a couple new names catching passes, senior WR Matt Choi, who missed most of last season with an injury, and sophomore WR Devin Phelps, whose best day came against Fordham last year.

Monmouth has a smallish, athletic line that are loaded with juniors and one fifth-year tight end whose specialty is blocking, senior TE Zach Fabel.  The entire right side of the line is new, but the blind-side tackel, 6'5, 300 lb junior OL Matt Stoneberg, is an 11 game starter from last year who will anchor this unit.

Monmouth's base 4-3 defense's strength, unfortunately, plays right into Lehigh's strength in running the football.  The Mountain Hawks' rushing attack will be trying to gain its ground against a team that has always been very strong in that area historically, and has been a way for the Hawks to steal wins against very good teams.  Liberty fans will certainly back me up on that - Monmouth's win over the Flames, where the Hawks stuffed Liberty's running game, probably was the single biggest factor of keeping them out of the Big South conference championship race last year.

5th year senior DE Darnell Leslie played against Lehigh a couple of years ago, but missed all of 2015 because of injury.  Before the injury, the 235 lb senior was one of the best defensive ends in the Big South, not only because of his ability for sacks but the way he would also amass tackles for loss as well.  Assuming he's entirely recovered, he'll certainly be a point of emphasis.

He's joined by senior DT Dimitrius Smith, a 6'2 275 lb tackle that led the defensive line in both tackles and fumble recoveries.  Smith and Leslie are alsi joined by sophomore DT Manny Maragoto, who is making his first career start, and sophomore DE Zach Talley, who recovered from an injury that held him out of most of 2015.

6'3 245 lb senior LB Payton Minnich, who also started against Lehigh last time, is another preseason all-Big South player who will be heavily depended upon by the Hawks.  He's joined by another player who suffered a season-ending injury early last season, senior LB Brandon Anthony, and sophomore LB Diego Zubuleta, who is a constant threat to blitz after a productive freshman year (20 takles, 4 1/2 tackles for loss).

The best athlete on the team might be junior SS Mike Basile, who has made a multitude of preseason all-America teams this preseason and was the leading tackler for the Hawks last season (with 119).  The 6'1, 200 lb defensive back, it is more of a linebacker-esque sort of safety like S Steve Atwater used to be.  Lehigh backs and receivers will have to keep an eye out for No. 30 at all times.

"As the past two years have gone, I've grown more as a player," he said at Monmouth's media day.  "I don't think I was ready to be a leader at all my first two years here, so I really believe I can be a leader of this team. I really believe that.  I can help everyone on the team. I can bring my knowledge and what I know, my experiences and really bring it down to the younger guys, the older guys, everyone. This team can really come together and we can really win some games this year."

Rounding out the team is an intriguing graduate transfer from Penn State, senior CB Anthony Smith.  Originally from Dover, NJ, he was a backup for the Nittany Lions but seamlessly enters the starting lineup at corner.  Senior CB Kamau Dumas, who spent some time on offense on Monmouth in the past, lines up on the other side, while junior FS Marcus Leslie, a former corner, slides to free safety.

Junior P/K Matt White averaged 40 yards per punt for the Hawks last year and has a tremendous leg, notching 9 punts past 50 yards.  Additionally, he was the preseason all-Big South selection for best placekicker, with 26/27 on extra points and 8/14 on field goals, including a 40 yarder.

Senior DB Kamau Davis returns as the lead kickoff returner, who had 324 return yards last year but none returned for a touchdown, while sophomore WR Matt Castronuova will be appearing on the other side in his first collegiate action.  On punts, another newcomer at that spot, junior WR Vinny Grasso, is scheduled to appear.

1. Solid Tackling and closing space.  Monmouth's offense is all about getting their speed into space the create, and making good things happen, so critical to Lehigh's chances at a win involves tackling well and making sure spaces close up fast.  Senior LB Evan Kauffman's ability to close things down will be critcal.

2. Balance.  Lehigh's offense can beat you in a number of ways, but it's important to keep things balanced between the pass and the run so that the Hawks can't focus on one aspect.  Balance will be key to keep them guessing.

3. Zen.  I'm not usually one for zen, but in the first game of the year it's very easy for the home team to get amped up - and make mistakes, especially on special teams.  In this season opener, staying "zen" - cranking down the amplitude, playing within yourself, keeping the penalties down - might really help pull this out.

The days of the Monmouth game being a mismatch are over.  The Hawks, a 63 scholarship school, go toe-to-toe with Lehigh competitively, and it shows in the breakdown.

The same narrative applies to both sides of the ball: "experienced offense, with dynamic quarterback, running back, and a stable of wideouts, goes up against shuffled defense."

I think this won't be a game defined by four or five big plays - I envision a game, like the last three contests between these two schools, that is surprisingly controlled with long drives resulting in touchdowns instead.  Don't be fooled by Lehigh's dynamic offensive numbers last year - this could be a game where Lehigh is held under 30 points, as both teams work out the rust.

Ultimately I think this will go the way of the latest games in the series - a close game going into the 4th quarter.  It's there where the Lehigh offense will take control of this game and deliver a nail-biting win.