Lehigh 42, Princeton 28 Postgame Thoughts: The Defensive Secret To The Turnaround 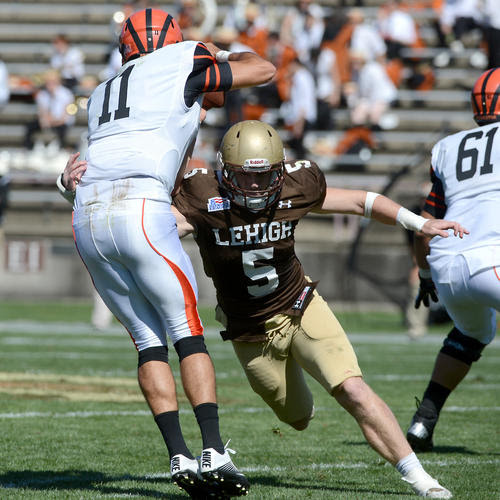 What a difference two weeks makes.

At times it's hard to comprehend how desperate it felt for Lehigh fans after the Mountain Hawks' slender loss at Villanova to fall 26-21 to the nationally-ranked Wildcats.

At 0-2, after a pair of excruciating losses, a rematch with the defending Ivy League champions Penn awaited, a game that the Quakers had circled on their calendar since about December.  Following that tough test would be a Princeton team that laid 52 points on Lehigh last year and returned almost all of the skill players on the team that beat them then.

A losing record going into the Colgate seemed like a best-case scenario.

And yet, here we are after these two tough tests, and the Mountain Hawks are 2-2, with a boatload of momentum going into their game vs. 0-2 Yale next weekend.  Suddenly, 3-2 and a three-game winning streak going into an enormous game vs. Colgate seems like a real possibility.

The reason for this dramatic, and important turnaround?

In the light of that great achievement, it's important not to lose sight of one of the biggest factors in Lehigh's strong performance versus Princeton: turnover ratio.

Lehigh forced three interceptions in the game this Saturday, a feat that was last equaled in 2011.

That game happened to be a decisive, Patriot League-clinching game vs. Georgetown which ended up a 34-12 win.

CB Bryan Andrews had two of those three interceptions, one which was returned for a touchdown.

"This was an exciting thing," Andrews said after his championship-clinching performance.  "When you're recruited, the first thing you want is to win a championship.  That was our goal from day one when we first came in, and it feels good to achieve our goal."

Junior DE Tyler Cavenas didn't think about returning his pick for a touchdown, the first of the three interceptions that Lehigh took away last Saturday.

"There was a pump fake and I actually thought he was going to throw it over me and I was getting ready to bat the ball," he said. "But I feel like the ball slipped out of his hands and it just happened to land in my lap. We had junior NG Julian Lynn getting pressure on the QB and I think he got nervous and it kind of slipped.  Everybody was joking, 'Why didn't you run the ball?'  I wasn't really expecting him to throw."

Cavenas' interception happened at a very opportune time, as the Tigers were driving on the Lehigh 30 when the ball landed in his breadbasket.  Even better, three plays later Shafnisky would deliver an explosive 42 yard touchdown to junior WR Gatlin Casey. making Princeton pay dearly for their mistake.

"As excited as I am about our offense, I'm really pleased with what we're doing defensively," Coen said. "Our defense did a super job last week in the second half against Penn and then they came up today with the big plays that we needed. ... That's huge to get those things and we hadn't been getting those things over the last couple years.  I want both (the offense and defense) to feel like they're a part of what we're doing."

They definitely were last Saturday.

The second pick, which occurred in the second half, came from senior LB Colton Caslow jumping a route and stopping a potential Princeton game-tying drive in its tracks.

Like the first interception, this, too, would cost Princeton dearly, as again, four plays later, Shaf would hit junior WR Troy Pelletier with a 14 yard strike to put Lehigh up 28-14.

"These last couple of weeks, we haven't been making game-changer plays on the defense," Cavenas said.  "I think today was one of those days, creating three interception and one forced fumble that we didn't recover.  Going forward, we need to keep doing that."

The final interception, the one by Evan Harvey, snuffed out any chance Princeton had at a comeback, with the only bit of drama being whether the Palm Beach Gardens, Florida native would manage to get into the end zone on the return.  Had he gotten one more block, he might have.  "It sealed the game," Coen said.

It was quite a turnaround from earlier in the game, when a fumble that was forced by Caslow couldn't find its way into the hands of any Mountain Hawk defenders.

"When I saw that ball on the ground, I was thinking I can't remember the last time we recovered a fumble," Coen said.  "I think one of the guys tried to scoop it instead of falling on it.  But boy, the boys stepped up really big with the three interceptions.  They were huge.  Princeton was starting to make a run to get back into the game, and without the interceptions, it would have been a lot harder for us."

Less headline-grabbing were some other important stops on defense that stopped Princeton on key 3rd downs, especially in the second half.

Up only 21-14 at the start of the second half, Caslow came up with a huge eight yard sack on second down, and junior CB Quentin Jones stuffed Princeton RB Charlie Volker, forcing an early punt.

Then, asked to stop the Tigers once again up 28-14, they did so, pressuring Princeton QB Chad Kanoff into two hurried throws, followed by a punt and another Lehigh touchdown drive.

Though the box score only counted two tackles for loss and one quarterback hurry, it felt like there were a lot more, as Kanoff seemed pressured a lot in key situations.

"I'm really pleased with what we're doing defensively," Coen said.  "The defense did a super job last week in the second half against Penn, and then they came up today with the big plays.  That's huge to get those things, and we hadn't been getting those things over the last couple of years."

As fun as Saturday's game was, as reminiscent of an "Air Lehigh" offense  the Princeton victory was, just as exciting to some fans is the emergence of a defense that is showing signs of coming together into a strong unit.  In fact, this Lehigh team is starting to feel like pieces are falling into place for a big game this weekend at Yale and a focused run in Patriot League play.