The buzz went through the press box in the minutes before last year's game versus Bucknell that QB R.J. Nitti, the starter for the 4-1 Bison, was not suiting up at quarterback.

Almost immediately, the mood of the Lehigh folks covering the game picked up.

Without Nitti, it would mean little-used QB Trey Lauletta would be the starter in his place.  That, along with the injury to the regular starting RB C.J. Williams, what seemed originally like a close matchup between two close teams felt like a very good shot at a win for the winless Mountain Hawks and might actually get Lehigh's season pointed in the right direction.

It didn't work out that way.

After jumping out to a 7-0 lead, Bucknell would ride a record-setting performance by WR Will Carter, who would get 3 big-play touchdowns during a stretch of 31 straight Bison points to power through to a 45-24 win over Lehigh and effectively ending any dreams of competing for the Patriot League title.


"We're really looking forward to this one and getting into league play," freshman LB Jake Buskirk said in the run-up to the huge game in Lewisburg this week. "Our motto is 'Family' and the captains are always talking about how we need to come together even tighter. Our out-of-league games didn't go exactly the way we wanted them to go, but we learned, we got tighter as a team and we got better. We show signs of great things. We just need to become more consistent. We haven't played a full game yet, but it will come. Hopefully, this is the week it will come together."

At the end of last week's post-game press conference, too, senior LB Noah Robb and junior QB Nick Shafnisky talked about the importance of the Patriot League slate.  Robb said he was excited to play Bucknell" and put these last couple of games behind us".  Shafnisky said he "couldn't wait to get the ball rolling".

Before the season Shaf told me that he was looking forward to the Bucknell game specifically because of all his games last season,  that seemed to really be the one he really wanted to have back and play over.  His stat line from that game shows why:  4 interceptions.  18 net yards rushing.  16/30 passing.  193 yards through the air.

"We turned the ball over five times," Coen said after that game.  "One was a fake punt, but we can't have four interceptions in any football game and hope to win."

That't not to say last year's 45-24 loss to Bucknell was all on Shaf - hardly.  A defense that gave up a mammoth number of big plays, including three 60+ yard touchdown receptions to Will Carter, also shouldered a big part of the blame as well.

Fortunately for Lehigh, the secondary has emerged as an area of strength for the team in 2015, and one that has not given up the same number of big plays as seasons past and has made some big plays of their own.

Not many quarterback have tested junior CB Brandon Leaks for very long in games.  That's because passes thrown his way have a tendency to be incompletions.

And junior FS Brian Githens has been an effective enforcer on running plays and has made opposing passers pay with two interceptions on the season thus far.

"I've always liked Brian," Coen said earlier in the season. "He's changed his body quite a bit. He's much more athletic. He's always been a strong tackler. He's probably one of the best tacklers on our football team. He's done a really nice job."

Two weeks ago versus Princeton, senior CB Olivier Rigaud snuffed out a quarterback-to-quarterback lateral, leveling his man, forcing a fumble and picking it up for a 72 yard touchdown.

"[Coach Wilcher] and Coach Coen came to my high school after the season and gave me an offer," he told me.  "I went on an official visit that February and it was great and that's when I decided to come here."

Though Jones played two ways at Collins Hill, at both corner and wide receiver, he was immediately tagged to play secondary for Lehigh, appearing on Lehigh's depth chart in nickel packages very early in the season.  Against Bucknell last year, Jones played and had two tackles, including one tackle for loss.

"Last season I played a lot at nickel and it was a great experience," he said.  "During spring lifting and training last year, one day right after a early morning workout coach Craig Sutyak told me I was moving to safety, and that's when I started playing safety."

When healthy this season, Jones has been the no-doubt-about-it starter at strong safety, already with 18 tackles and two forced turnovers.

But most encouragingly, Jones seems to appreciate the lessons learned from last years' game versus Bucknell and the lessons from last week's defeat against Yale.

I was reminded of a key quote from last season's game versus Bucknell.

"Coach always tells us to play the way we're capable of playing," LB Isaiah Campbell said after that game. "I feel like if everybody just does what they're coached to do and they don't try to be Superman, things will work out better."

"Last week's game was a tough one, and we made good plays and at times made bad plays," he told me.  "We just have to bounce back strong and have a great week of practice and prepare for Bucknell. It will be a good physical game this week at Bucknell, and our preparation and the ability to do our jobs on the field will be the key to beating them."

The players don't seem to need to be reminded how big this game is.

They seem to be looking forward to doing their jobs on the field, get back into the fray physically, to finally put things together with the consistency required to turn an OK football team into, potentially, a Patriot League championship-caliber team.

Any potential shot at a Patriot League championship run starts this Saturday.

Not a lot in this week's game notes or from the wires about injuries this week.  Lehigh will be starting the exact same offense and defense at the 1s this week as compared to last week.

There was a concern that Rigaud and junior LB Colton Caslow, who came out last week vs. Yale with injuries, might not be ready to go this week for the Mountain Hawks.  But Coen said this week that both guys would be ready to play on Saturday.

Freshman LB Jake Buskirk, who came in for Caslow when he came out, did very well with four solo tackles and could be in line for some more work this week, but he's still behind team captain Caslow on the depth chart.  You wonder if he might get some extra work this week.

This weekend's weather in Lewisburg is supposed to be great football weather.  A bit chillier than the rest of the week with a high of 63 but a 0% chance of rain at this point.  Should be nice tailgating weather for the only real game in town.

Unfortunately for Lehigh and Bucknell fans, the nice weather may be a concern, because there's, um, another football game down the road from Bucknell involving some outfit calling themselves the state University of Pennsylvania and some other school from Indiana.  Plan your trip to Lewisburg accordingly, and for Heavens' sakes try to avoid those cows. 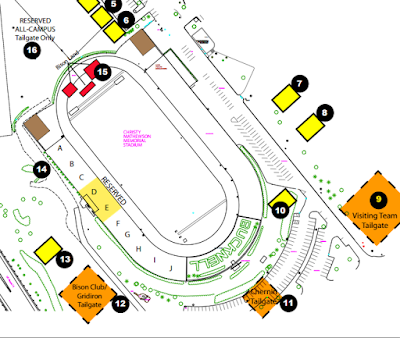 Tailgating at Bucknell couldn't be more convenient for the visiting fan.  See 9) in the picture to the right?  That's right across from some parking to the stadium and a stone's throw from Christy Mathewson stadium.

The lots open three hours prior to kickoff, thanks to the efforts of some enthusiastic students, and it's should be a great afternoon for a road trip.

So why not go?

There are a lot of famous Bucknell alumni that are business leaders and the like, but one guy you might not be aware of is a guy called Ben Benson, who owned a famous steakhouse in West Midtown called Ben Benson's Steakhouse.

The steakhouse closed in 2012, but was known for its family atmosphere and its ability to be a hugely successful business.  Benson the restaurateur was very proud of the fact that he didn't make his iconic steakhouse into a chain.

Ben Benson's Steakhouse was always on my bucket list to visit in Midtown - once I earned enough money to "make it", as they say.  While I'm still waiting to "make it", I was saddened to hear Ben closed it down.

You know I am pulling out the big guns when I pull out Yuengling Premium as by Drink of the Week.

Aside from the fact that it's my all-time favorite beer (and no, Yuengling doesn't pay me anything to say that), Yuengling Premium has a great, unofficial track record when I select it at #DOTW.  The last time I was able to track when I selected it as Drink of the Week, it was in a victory over New Hampshire.  But in past years it has also seemingly had magical powers.

In a must-win for Lehigh, you need all the tools at your disposal to get the win, and this one is mine.  Enjoy  Yuengling Premium - always in the bottle! - at your responsible tailgates.