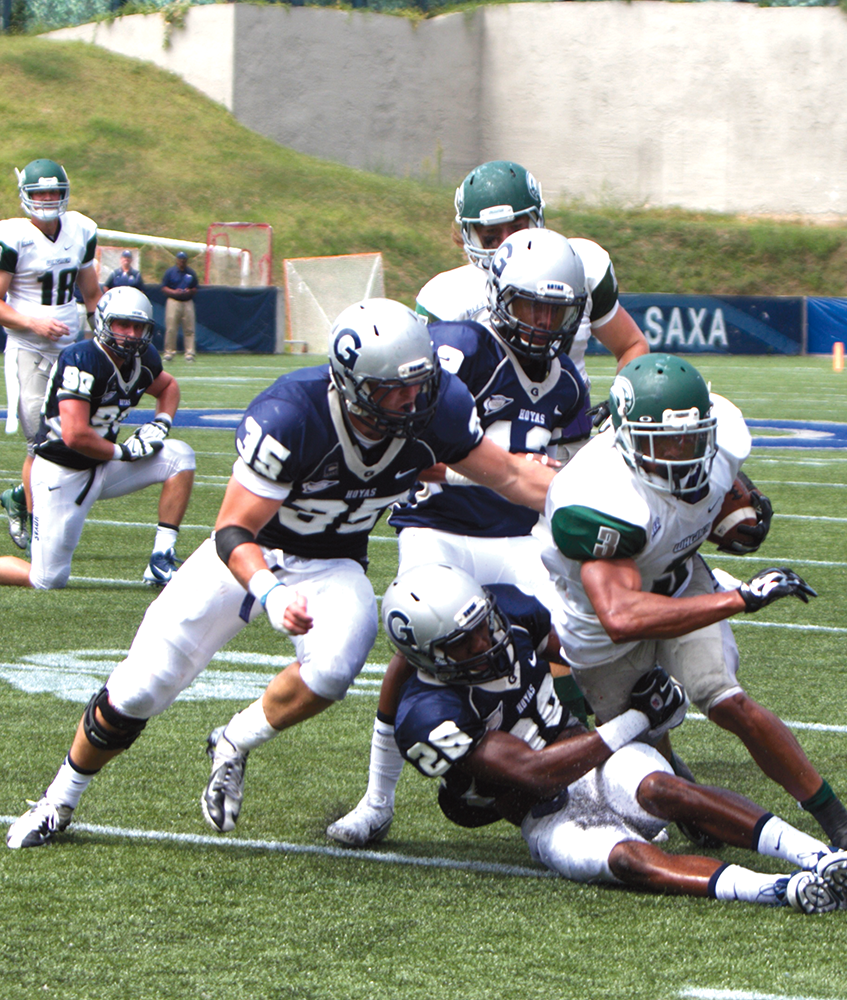 No teams can beat Georgetown in one area: timezones.

While head coach Rob Sgarlata might prefer you focus on how many games where Georgetown had a chance going into the 4th quarter, or how they have a sneaky good defense, the truth is nobody can touch Georgetown when it comes to getting players all over the world.

Take senior DB Ettian Scott, whose hometown is listed as Okinawa, Japan.  Or senior RB Jo'el Kimpala, who hails from the Democratic Republic of Congo.  Or sophomore WR Luke Morris, who comes from Honolulu, Hawai'i.

If Georgetown's policy of not offering football scholarships might be seen as a hindrance in some circles, it's clearly not much of a setback when it comes to getting players that hail from, well, all over the world.

In Year 2 of the Sgarlata era, the Hoyas are hoping to make the jump from 3-8 squad to an over .500 team, and challenging for the Patriot League title.  Impossible?  Some might think so.  At media day, the Hoyas were picked 7th out of 7 teams.

Yet senior LB Matthew Satchell said at Patriot League Media day that this Georgetown team would be a "down and dirty fighting team," showing that this squad may be a tougher out than people imagine, especially with their tough defense.


When picking teams that might have breakout seasons, some analysts look at talented, senior leadership at the key leadership positions.  In this 2015 Patriot League football season, no two offensive players have had more first-team playing experience than 6'6 senior QB Kyle Nolan, senior WR Jake DeCicco and 5'11 senior RB Jo'el Kimpala.

"Kyle can make big throws, but people underestimate how well he runs," Sgarlata said recently. "He's improved his overall command of the offense, and since last season, he has asserted his leadership with the entire team."

Sgarlata said that he had cut down on his interceptions from the first two seasons and also had a good day passing in their season finale vs. Holy Cross, a 21-16 home victory to send their seniors out with a victory.

Nolan's 2 TD, along with Kimpela's 109 yards rushing and extra TD, were all the scoring the Hoyas needed to beat the Crusaders.

"We recruited Jo'el out of Texas, and we got lucky," Sgarlata said of Kimpela, who played high school football in Euless Trinity, Texas, a powerhouse football program in the state. "He's one of those kids that the others follow."

Yet even with all the experience returning, Georgetown's offense was ranked last in the Patriot League last season, and 102nd in FCS in total offense.  Much of it came in the way of tackles for loss and sacks - the Hoyas gave up more than 2 sacks per game and yielded 6 tackles for loss per game as well.

Defense, the unit that kept the Hoyas in games last season, see two of their three leading tacklers leave, LB Nick Alfieri and all-American DE Alec May.   Much of the defense graduated from last season, meaning that the challenge and youth will come from the defensive side of the ball for the Hoyas in 2015.

"I don't think you can ever replace those guys," Sgarlata said. "You just hope that the guys that came after them paid attention to the example that they set."

But Satchell (92 tackles, 6 tackles for loss, 2 INTs) seems ready to become the next great Georgetown defensive player, as well as junior DB Ettian Scott, who bagged 4 interceptions last season and made the preseason all-Patriot League team.

The Hoyas seem to have the talent to improve on their offensive numbers from 2015.  The question becomes whether the underclassmen in the program have what it takes to pull together better pass protection and defensive guys to step into some pretty big shoes on defense.  If they can solve those riddles, they will finish much better that 7th in the league and achieve their goal of an over .500 season.