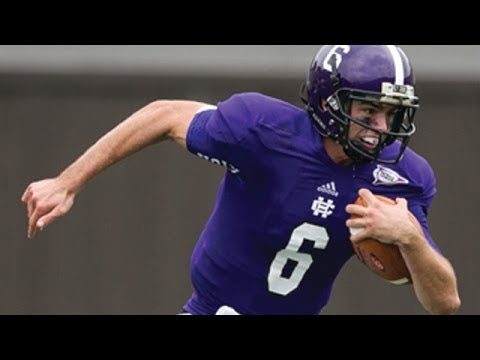 It's a different sort of November for Lehigh this time around, but one that's still very important in regards to building up to the 150th meeting between Lehigh and Lafayette at Yankee Stadium.

The Mountain Hawks are essentially out of the playoff race, but the test this weekend against the Crusaders will be interesting for one very big reason: sophomore QB Pete Pujals.

Pujals and Lafayette sophomore QB Drew Reed are cut from the same cloth, young, mobile quarterbacks that can easily take off with the ball and also kill you with a precision passing game.

It's the closest thing to a dress rehearsal that Lehigh will have before the 150th.


"He's got a presence and leadership ability," head coach Andy Coen told Keith Groller of The Morning Call this week. "He wants to be in command of the offense and he's pretty outward about it. The biggest dimension for him is how well he's running the ball with their zone reads and their option game. We haven't played an option team all year but Holy Cross is very similar to one."

That's a change from the years when QB Dominic Randolph picked apart the Lehigh defense during his run as the signalcaller of the Crusaders in their championship year of 2009.  While Randolph could run with the ball, his specialty was dissecting a defensive secondary.

Now head coach Tom Gilmore has an offense that will look a lot like Lafayette's in Yankee Stadium, with the zone-reads, and possible option plays to go with the passing game.

Two weeks ago against Lafayette, Holy Cross actually ran the ball a stunning 66 times against the Leopards to preserve a 26-16 victory.

"Crusader sophomore quarterback Peter Pujals sliced and diced the Leopard defense with a mix of misdirection runs inside, dazzling fakes on sprints to the corner, and an effective passing game," Brad Wilson said in the Express-Times.  "He finished with a career-high 26 carries, 115 yards, and one touchdown rushing and went 7-for-12 passing for 117 yards and a score."

"Our offensive line did a phenomenal job," Pujals said. "We had a lot of young guys step up today. When we get a push up front, it makes reading your keys a lot easier. It was pretty much a matter of taking what Lafayette gave us."

In fact, in Shaf's first snap as quarterback, it was a handoff to Sherman that ended up as a touchdown

"My eyes lit up on that play call, I thought 'awesome, man,'" he said afterwards, a little gleam appearing in his eye again as he said it.  "FB Zach Hayden made a great block, the line blocked their butts off, I saw a seam, and knowing we were in a situation where we needed to get the momentum going, I just put on the jets, and decided not to get caught this time."

"I'm so proud of him, his leadership, how he's grown in the past couple of years," Coen said after the game.  "If he had to put the other 87 guys on his back to win this game, he was going to do it.  You can win a lot of games when you have guys like him."

The last time Lehigh went to Worcester two years ago, though, it was anything but easy.

"Not looking anything like a one-win team," I wrote after Lehigh's 36-35 escape over the Crusaders, "Holy Cross gave Lehigh every single last thing they could handle, rattling off 21 unanswered points in the 3rd quarter against the No. 1 defense in the Patriot League and putting themselves in position to fire off the game-winning 43 yard kick with 11 seconds to play.

"The field goal would barely have the distance, but would be just wide right - the margin between winning and losing the game.  Lehigh's 36-35 win would be the second time in three Patriot League games that their opposition would be in position to tie or win the game in the final seconds, but miss the conversion."

Games against Gilmore, a former assistant at Lehigh, are always valued by the Lehigh coaching staff, and a win against them here would be of great help in getting the Mountain Hawks ready to win the football game in Yankee Stadium.  If they can stop Pujals, they can stop Reed.

Game Notes
With last week's win at Georgetown, this weeks game notes don't see that much of a change in the starting lineups.  Freshman WR Troy Pelletier, who had a breakout game last week, starts on the other side of senior WR Josh Parris.

The only injury of note last week came to junior DT T.J. Stubbs, who had a "nasty" sprained ankle, according to coach Coen, so senior DT Greg Palma will get the start and freshman DT Tyler Cavenas will continue to see lots more time on the defensive front.  Cavenas has blocked three kicks this season, including a crucial extra point last week, so it's going to be exciting to see his development on the defensive front this weekend.

Bundle up if you're headed to "Woostah" this weekend, where the high is scheduled to be around 40 degrees.  Yes, Virginia, 40 degrees.

Famous Holy Cross Alumnus You Do Know About

Today a Holy Cross alumnus that you know made a lot of news on Twitter - NBA man Bill Simmons, who ripped into fellow ESPN host Mike Golic by lifting some things he said out of context for his radio show that made him quite angry.

Simmons, despite the fact that he's a Holy Cross guy, is someone I like.  He has always had this uncanny ability to be able to talk like a guy in a bar about any subject and relate it in a personal way that makes it seem he's like your best friend talking about anything.  Anyone who started blogging (like I did) more than a decade ago can't help but look at his work and his career arc and not relate to him in terms of the guy who came out of nowhere, based on his likability, and wish they could replicate his recipe for success, which of course is impossible.

More than that, though, he made sports his own personal story, and made it personal at the exact right time in the cosmos, as the Red Sox and Patriots broke decades of futility and started sports dynasties.  Doing things personal is what I try to do here, too.

(The closest I got to being a part of ESPN was a chance encounter with Chris Berman at a Hartford Whalers game.  Sadly I didn't think to pitch him the idea of Lehigh Football Nation at the time.)

I hate Buzzfeed.  Having said that, I had to scour Buzzfeed to figure out "15 Amazing Ways to Spike Hot Chocolate", because in 40 degree weather in "Woostah", you need spiked hot chocolate, and I thought it right and just to come up with a halfway-decent recipe.

Skipping over the obviously dippy hipster varieties on their list (if you have "vanilla vodka" in your alcohol stash, time to rethink things, methinks,) I settled on 3 parts hot chocolate, 1 part Kahlua, and 1 part peppermint schnapps.  (The hot chocolate is best made with Ghiardhelli's Sweet Ground Cocoa and Chocolate, preferably liquid, and perhaps a tablespoon into the huge thermos of unsweetened cocoa powder as well - my preference.)

Marshmallows are optional, as are the chocolate shavings.  Especially for a tailgate.

As always, Drinks of the Week have a place in responsible tailgates, but only if you behave yourself, don't get behind the wheel while impaired (or worse), and are over 21. Please do that.  Enjoy the drink, stay late at the game, and get home sober.