What's in a game?

You're a typical Lehigh fan.  You know Lehigh is playing James Madison next weekend.  You know that the Dukes have been a pretty good football team over the years.  After reading this fantastic Lehigh blog you found, you learned of that national championship they won with QB Justin Rascati, after that championship run that started with converting that 7th-and-goal against the Mountain Hawks in the playoffs.

But then you read a recap of James Madison's game last weekend against Maryland, and then you don't know what to think.

The Terps are a FBS team, playing their very first game as a member of the Big 10 against the Dukes, coasted to a 45-0 lead against James Madison and were never really threatened.  You read about mistakes, penalties, scoring only in garbage time.  You might have caught some of the BTN broadcast, showing a sullen QB Vad Lee angry at himself after his second interception.

What's in that game?  Does it mean anything, in the grand scheme of things, in regards to Lehigh's chances this Saturday?

"I think going into the game," JMU head coach Everett Withers said this week in the CAA teleconference, "that we as a coaching staff said there are going to be a lot of events happen during this game.  I would say that we didn't respond as well as I'd like, but I would also say there were some positive things coming out of the game."

It's probably safe to assume that little in the first half's film would find itself in the "positive things" that coach Withers was talking about.

The Dukes were stymied by Maryland's defense, which admittedly was a veteran group with something like ten returning starters.

In the first half James Madison only had one sustained drive over 30 yards, which ended on a QB Vad Lee interception.

Then there were the penalties.

"You can't have 9 penalties for 102 yards and expect to beat any team that's good," Withers said.  "We had two fair catch interference penalties.  We had about an hour and thirty minute practice [Sunday], and the kids understand that we need to be better in Week 2 than we were in Week 1."

The folks over that the JMU blog were a bit more, um, unrestrained in their criticism.

"So obviously that wasn’t pretty," they said.  "In fact, it was just awful. Not even exactly painful, just really unentertaining, undisciplined, awful football if you can call it that."

Despite these fairly bad reviews of JMU's performance last weekend from the top to the bottom, though, what does that really mean for this Saturday?

"We watched the game and at the skill-position level," he told Keith Groller of the Morning Call.  "I thought it was pretty even.  I thought the game really flipped at the line of scrimmage where Maryland was really strong and physical and got a lot of pressure on the quarterback and made him uncomfortable all day long.  But the biggest concerns I have are the speed of these guys. They have talent that was in the program and they added 13 FBS transfers. We have 12 guys who are starting their first game."

"We know they have athletes, they have size, they have talent," he said. "They like to attack the perimeter with screens and outside zones. We've just got to stay focused, read our keys and make plays. We've had a lot of time to prepare. We can't wait to get started."

Talking to Greg Joyce of the Express-Times, junior WR Derek Knott took note of Dukes S Dean Marlowe, a guy whom Knott will need to know where he is on the field at all times.

"He's their big component there," Knott said. "Their linebackers and corners are really physical. They're a pretty solid defense. But their secondary definitely stands out to us. We gotta bring our A game."

The JMU blog also noted that one of the few "bright spots" for their fans in the aftermath of the Maryland game was the play of their secondary and how it improved in the second half.

It seems like Lehigh shouldn't, and won't, be fooled by the Dukes' limp performance against Maryland.  They know what they're really up against: a tough, physical, CAA team with FBS-caliber players at almost every starting position, even if many of the moving parts are extremely young.

In fact, they remind me of another young team that came to Murray Goodman a few years ago - Liberty.

In 2011, the Flames came to Lehigh with a young team with some FBS-caliber players, too.  Guys like CB Walt Aikens, and QB Mike Brown, and some other guys who were darn close, like RB Aldreakis Allen and WR Chris Summers.

Lehigh fans obviously are hoping for a similar result in Saturday's game, against a former FCS National Champion, a school with clear aspirations to becoming an FBS school someday, and a team, that everyone understands, has great young talent on the squad.

The question is - can this Lehigh team, relatively inexperienced, with so much newness on both sides of the ball, do a similar trick?

There are big differences between the 2011 team that played Liberty and this team that will face off against JMU.  The 2011 team had several games under their belt.  They were coming off a Patriot League championship and a run through the FCS Playoffs.  They had a senior quarterback, QB Chris Lum, and a future NFL receiver, WR Ryan Spadola.

Can this team do the same, with opening-day jitters and mistakes to work out, and newness to iron out?

(Buy tickets to the game here!)

Lehigh's game notes show the opening lineup for the 2014 Mountain Hawks, and there are relatively few surprises.

Sophomore RB Brandon Yosha, Lehigh's FBS transfer from the University of Miami (FL), starts at running back, which isn't a surprise.  What is a mild surprise, though, is that he's also on the kickoff return team as well, alongside sophomore CB Brandon Leaks.

Another mild surprise is that local product junior LB Noah Robb is listed as a backup to Campbell on the depth chart.  That doesn't mean that we won't see much of Noah on Saturday, however - look to see him come in frequently.

On JMU's game notes, sophomore LB Gage Steele, an all-CAA performer last season, is not listed on the two-deep at inside linebacker.  He didn't play against Maryland, but did practice a bit this week and may see some time.  If he's healthy and plays extensively, he's a big game-changer for the JMU defense.

Over the years, Lehigh's home openers have been blessed with near-perfect, sunny, summerlike weather.  The early weather forecast, though, seems to indicate that this may change this weekend.

As of right now, the hourly forecast calls for a 40% chance of scattered thunderstorms, and a 80% chance of rain at some point during the afternoon, though it's very possible the worst of the showers might occur after the game has concluded.  I'll check in later with a more up-to-date forecast, but it's worth noting that we may have a rainy weather game on our hands. 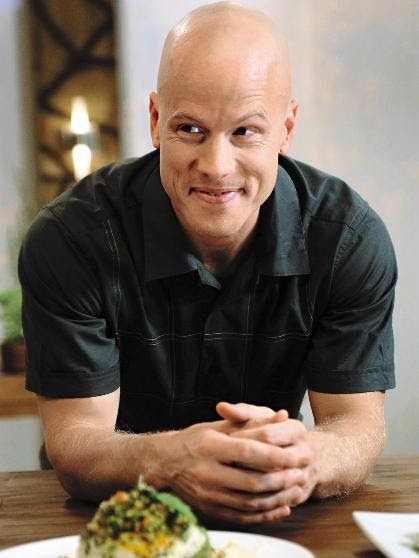 It would be way too easy to pick an athlete like LB Akeem Jordan, a player on Washington's NFL football team and former Philadelphia Eagle.

But how many of you know former Food Network Star contestant Nathan Lyon was a graduate from JMU?

Lyon is known for being edged out by the now-certified-megastar Guy Fieri in the reality show, but Lyon has had a stellar career in his own right, hosting Lyon in the Kitchen and other PBS cooking specials.

Maybe we should arrange a cook-off between him and Whitney Chen, a Lehigh competitior on the same show years later.

If it's the football season, it's time for the LFN's Drink of the Week.  Usually I try to match up the drink with the school, or region - or sometimes, it's just what a damn well feel like doing.

This week, I'm on a classic margarita kick - and I mean proper margaritas, not the pre-made concoctions you might find at the liquor store that you douse with crushed ice.  I mean with fresh squeezed lime juice, Agave nectar (this should be available at a better liquor store), Triple Sec, and a high quality white tequila (my suggestion: white Sauza Tequila).

I follow this recipe, subbing out the simple syrup for Agave nectar.  I also strongly suggest investing in a metal shaker to enjoy them properly, throwing the ice and the parts into the shaker, shaking, and pouring into margarita glasses surrounded by the salt or without, your preference.  Once you try it, I bet you won't go back.  (Be warned, though - they are strong this way.  You may want to consider adding a bit of cold water to them to water it down.)

Sensible drinking can be a part of a pleasant tailgating experience, but only if you drink responsibly and for God's sakes don't get behind the wheel of a car when having consumed too much alcohol.  Make a day of your tailgate, stay late and sober up before driving.  (Even if it's raining.)