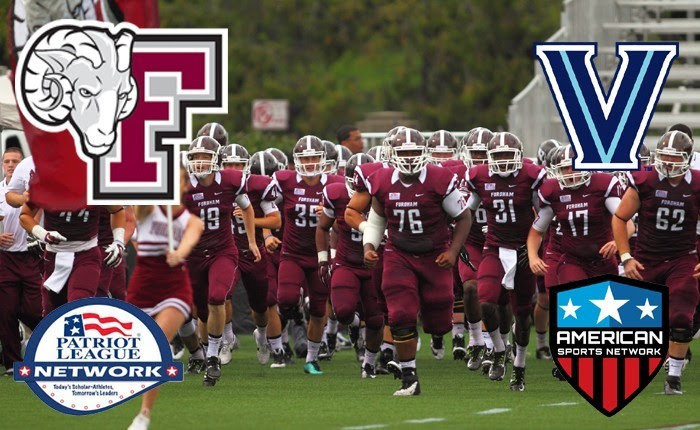 This weekend's Lehigh football game, if you can't make it, will be broadcast on Service Electric 2 in the Lehigh Valley, and simulcast online via the Patriot League Digital Network.

Six Patriot League teams play this weekend, with Colgate having a bye week after last week's loss to Ball State.

Interestingly, future Mountain Hawk opponents Monmouth and New Hampshire also have bye weeks this week (as does Yale and Cornell, of course, as the Ivy League football season has not started yet).

Unquestionably the "big game" after the one at Murray Goodman is the clash between Fordham and Villanova, a good game vs. Top Ten teams that will be broadcast on The Comcast Network locally, a bunch of affiliates nationally - and, thankfully, on the Patriot League Network too.

Here's the PLN preview of this week's games.

I thought the Hoyas might give Wagner a good game, but they struggled in a 21-3 loss.  The Flyers are probably better than the Seahawks.

I keep reading that the Crusaders should rebound this week and beat a team from the MEAC.  But I'm not sure they're over the brutal way they lost against Albany last week, and Morgan State is much closer to Holy Cross in talent than people think.

Is it too late to get a projection screen in Murray Goodman's parking lot?  A dandy of a game featuring two of FCS' top QBs, this time Fordham will not have the element of surprise in their favor.

It sure didn't feel like a battle between two FCS playoff teams when I swung by the matchup between these two teams last season, but it most certainly was.  Leopards probably should have won last year in Easton.  This year, they get revenge in Fairfield.

The Bison were supposed to mop up VMI last weekend, but squeaked by 42-38.  What might Marist do?  Come close, but not quite, pull off the upset.


Other interesting games of note at TV/streaming information: