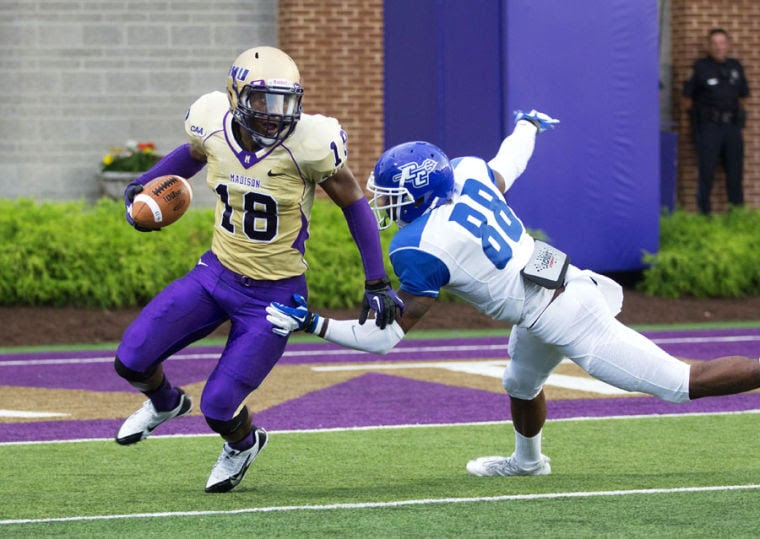 You gotta give credit to head coach Jeff McInerney and the Central Connecticut State Blue Devils - they won't back down from anybody.

A week after taking on nationally-ranked James Madison in their home opener last weekend, CCSU turns their bus to Bethlehem to visit Murray Goodman Stadium.

The Blue Devils, who struggled to a 2-8 season last year, are hoping that the old football adage is true that you improve the most from Game 1 to Game 2.

That's how they hope to break up a three-game losing streak dating from last season.

The Blue Devils' last trip to Murray Goodman stadium wasn't exactly a pleasant experience for the Mountain Hawks.  The trip resulted in a 28-21 victory for the Blue Devils back in 2009.

As games go, from the Lehigh perspective, it could have been one of the most disappointing in the era of QB J.B. Clark, though from the Central Connecticut State perspective WR Josue Paul, current CFL and former NFL wideout, had a solid game, and also hauled in the game-winning touchdown in the contest.

At the time, the Blue Devils, under head coach McInerney, were in the midst of an incredible five-year stretch from 2006-2010.

In that timeframe, CCSU would notch a 38-18 overall record, defeat an iconic FCS program in Georgia Southern, win two NEC championships, and compete in the programs first-ever postseason game, the 2009 "Gridiron Classic" against Butler.

The win over Georgia Southern was especially iconic since McInerney was a student of the triple option under then-Georgia Southern head coach Tim Stowers, and was on Stowers' staff when the Eagles won the I-AA national championship in 1990.  It showed that the NEC's limited-scholarship model didn't make them uncompetitive - despite the scholarship difference, the former coach could still beat his former team.

You could say that game, and to a lesser extent the victory against Lehigh, were probably key exhibits for the late NEC commissioner Brenda Weare when she pitched to the FCS playoff committee that the NEC deserved an autobid to the playoffs.  Ultimately, her pitch was successful, and the NEC and Big South were allowed autobids to the FCS playoffs in 2011.

(Since the NEC received their autobid two years ago, they have been extremely worthy competitors, first with Albany coming within a whisper of beating Stony Brook in 2011, losing 31-28,  and Wagner thoroughly dominating Colgate 31-20 in last season's first-round game.)

But as the NEC has risen in stature in the last two years since CCSU's last trip to Murray Goodman, the Blue Devils have seen a dramatic change in fortune in New Britain with their football team in terms of wins and losses.

Despite some very fine improvements to the Blue Devils' infrastructure - a $3.5 million upgrade to Arute Field, finished last season, doubled seating capacity and will also allow the Blue Devils' field to be used to host high school championships - McInereney's teams combined for six wins in the last two years.

Last year, CCSU gave up 30 points or more in nine of the ten games they played - a trend that had continued through the first game of 2013.

The Blue Devils fell 38-14 to the Dukes, falling behind 13-7 and seeing James Madison score 25 straight points.  It made an amazing 10 out of CCSU's last 11 games that their defense gave up 30 points or more.

A lot of the same old mistakes from last year reared their ugly head.  Two costly interceptions, including one returned for a touchdown.  Allowing 247 yards rushing to the Dukes, and allowing them to average 5.7 yards per carry.

Last year, Lehigh got a lot of rushing yards on the Blue Devils, too, in New Britain.  RB Zach Barket, senior RB Keith Sherman and junior RB Rich Sodeke teamed up for 137 yards rushing and 3 TDs, with QB Michael Colvin adding two more touchdowns, a rushing score and a pass to TE Max Anderson to cap off the scoring in a dominating 35-14 win.

Of course, that only makes the expectations higher for Lehigh football's opening afternoon - and has CCSU coming to Bethlehem with revenge on their minds.

CCSU head coach Jeff McInerney has given the former "Teacher's College of Connecticut" unprecedented success, on the balance: he's the first head coach of the Blue Devils to ever post a winning record in his first three seasons.  But the last two years have seen a lot of struggle, going 6-15, and the winning times seem fairly far away.

Of course, a win over Lehigh would probably change everything for them, and McInerney, a fiery, riverboat gambler sort of coach, won't be short on emotion this Saturday.

Game Notes
The game notes are here, and I'll be discussing the Lehigh starting lineups in detail over the next couple of days.  But I will mention an injury in regards to one of the team captains, senior SS Tyler Ward.

Weather Report
It is looking like absolutely perfect weather at Murray Goodman this weekend.  With a high of 76 an mostly sunny skies, it's a perfect time to make a day of the game.

LFN's Drink of the Week
You may have heard that WR Ryan Spadola was signed by the NFL's New York Jets.  This offers you, the Lehigh fan, a golden opportunity to celebrate this with the first LFN "Drink of the Week".

Gang Green.  New York.  The Big Apple.  The drink of the week almost writes itself: the Green Appletini, 2 parts Vodka, 1 part apple schnapps, 1 part melon liqueur, and a splash of lime is the official drink; I like to add a splash of apple juice as well (but maybe that's because I'm getting older); also, you can't beat Granny Smith slices notched in the side as well.  Your mileage may vary.

October 02, 2009
(Photo courtesy switched.com) I'm sure this won't be appreciated by the latest famous freshman to attend an Ivy League school. No, no, I'm not talking about Brooke Shields, I'm talking about Emma Watson, the actress who is best known for her turn as Hermione Granger in the Harry Potter movies. We always knew there was something, well, different about kids who went to Harvard - a bit of an upturned nose, perhaps, annoying arrogance, or maybe even some Brahmin-ness while we're at it. Turns out, though, that some students were up to something more sinister: stalking Ms. Brown University at the Harvard/Brown game last weekend, as reported by the New York Post : Page Six reported on Tuesday that the "Harry Potter" starlet and Brown University freshman looked "quite shaken" on Saturday as Harvard beat Brown 24-21 in Cambridge. Watson was reportedly flanked by security guards to protect her from gawkers. But her discomfort was actually the result
12 comments
Read more